Bishops at the Border 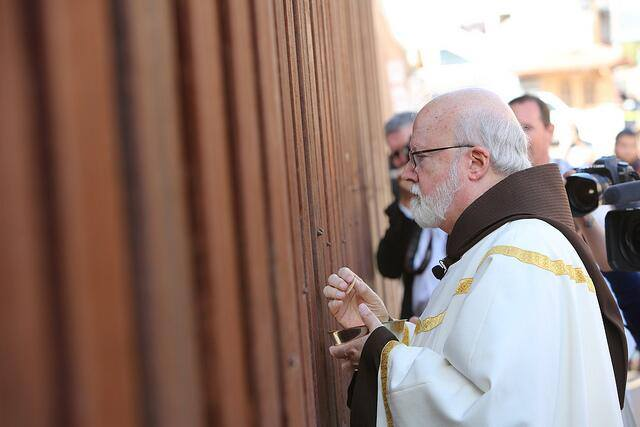 As the nation continues its apparently endless debate on comprehensive immigration reform, members of the U.S. Conference of Catholic Bishops joined together this morning with residents, migrants and advocates at the border in Nogales, Arizona. There they celebrated Mass together to remember the thousands who have perished attempting to find a new life in the United States in the desert border region that has come to be known as “our Lampedusa.”

This “Mission for Migrants” included a wreath laying ceremony and a tour of the border. It was inspired by the trip by Pope Francis to Lampedusa, Italy, last year to pray for migrants who died attempting to reach Europe by boat.

“As a moral matter, our nation can no longer employ an immigration system that divides families and denies basic due process protections to our fellow human beings,” said Bishop Eusebio Elizondo, auxiliary bishop of Seattle and chairman of the USCCB Committee on Migration.

During the homily, Boston’s Cardinal Seán O’Malley reminded the assembly that “the United States is a nation of immigrants.” He said, “Only the indigenous Native Americans are not from somewhere else. So the word of God reminds us today that our God wants justice for the orphan and the widow and our God loves the foreigners, the aliens and reminds us that we were aliens in Egypt.”

The Cardinal said, "Here in the desert of Arizona, we come to mourn the countless immigrants who risk their lives at the hands of the coyotes and the forces of nature to come to the United States. Every year four hundred bodies are found here at the border, bodies of men, women and children seeking to enter the United States. Those are only the bodies that are found. As the border crossings become more difficult, people take greater risks and more are perishing.

Cardinal O'Malley said that last year about 25,000 children, mostly from Central America arrived in the United States, unaccompanied by an adult. "Tens of thousands of families are separated in the midst of migration patterns," he added, "more than 10 million undocumented immigrants are exposed to exploitation and lack access to basic human services and are living in constant fear. They contribute to our economy by their hard work, often by contributing billions of dollars each year to the social security fund and to Medicare programs that will never benefit them."

Realling the “hardships and humiliations of so many immigrants who come to the States fleeing from poverty and oppression, seeking a better life for their children,” he said, “Sadly enough many immigrants spend years without the opportunity to see their loved ones. How many rural areas are peopled by grandparents taking care of little grandchildren because the parents are off in the United States working to send money back home?” The bishops have called upon the Obama Administration to use its authority to limit deportations of immigrants “who are no threat to the community” and have families living in the United States and would benefit from a legalization program.

Cardinal O’Malley noted that day’s Gospel “begins with a certain lawyer who is trying to test Jesus,” eventually demanding to know “Who is my neighbor?” Jesus responds with the parable of the Good Samaritan.

“In Jesus’ day the term ‘Good Samaritan’ was never used by the chosen people,” the cardinal said. “Indeed it would seem a contradiction of terms. How could someone be both a Samaritan and good?

“The Samaritans were the despised foreigners, heretics and outcasts. Yet Jesus shows us how that foreigner, that Samaritan, becomes the protagonist, the hero who saves one of the native sons who is rescued not by his fellow countryman and coreligionists but by a stranger, an alien, a Samaritan.

“ ‘Who is my neighbor?’ Jesus changed the question from one of legal obligation (who deserves my love) to one of gift giving (to whom can I show myself a neighbor), and of this the despised Samaritan is the moral exemplar.”

Members of the U.S. bishops’ border delegation have called upon Congress—specifically the House of Representatives—to move quickly to fix a broken immigration system. While the U.S. Senate passed comprehensive immigration reform last year, the House has refused to move on the measure or pass its own version of reform. “Our elected officials are sent to Washington, D.C., to make decisions and lead our nation into the future,” said Bishop John Wester of Salt Lake City, a member of the committee. “They should no longer delay action on this issue, which enjoys the support of the large majority of the American public.”

During the Mass, Cardinal O’Malley and the bishops laid a wreath at the border wall in Nogales, Arizona, to remember those who have died on both sides of the border attempting to reach loved ones in the United States. At Lampedusa, Pope Francis threw a wreath into the Mediterranean Sea to remember migrants who have died attempting to reach Europe.

“We come to the desert today because it is the road to Jericho,” Cardinal O’Malley said. “It is traveled by many trying to reach the metropolis of Jerusalem. We come here today to be a neighbor and to find a neighbor in each of the suffering people who risk their lives and at times lose their lives in the desert.

“Pope Francis encourages us to go to the periphery to seek our neighbor in places of pain and darkness. We are here to discover our own identity as God’s children so that we can discover who our neighbor is, who is our brother and sister.”

Photo: Cardinal O'Malley offers communion through the border fence at Nogales, Arizona. Photo courtesy of the Archdiocese of Boston.

Kevin Clarke
@clarkeatamericaclarke@americamagazine.org
Show Comments (
3
)
Comments are automatically closed two weeks after an article's initial publication. See our comments policy for more.
Bill Mazzella
7 years 5 months ago
Kudos to the American Bishops and the leadership of O'Malley. This is what they should be known for.
Beth Cioffoletti
7 years 5 months ago
I watched part of this, in Spanish, as it was being live streamed. Visually, the backdrop of "the fence" was stunning. Seeing this photo of Cardinal O'Malley giving communion THROUGH the border fence is almost too much to be able to take in. It feels absurd, but I know that it is not absurd at all, but the way it is. Still, I'm having a hard time with it.
David Pasinski
7 years 5 months ago
I would like to see that clip and share it with our Justice and Peace committee. It is encouraging to see this kind of action and call for action, but I bet it will not trump the continued bishops support for groups like Hobby Lobby and fighting against ACA with articles like that of Richard Doerflinger. The bishops will still support more of the GOP plank than immigration reform when push comes to shove...Sad...