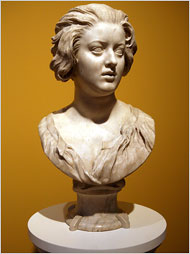 When I read Holland Carter’s near rhapsodic review, in the August 7th edition of The New York Times, of the current exhibit at the Getty Museum in Los Angeles, "Bernini and the Birth of Baroque Portrait Sculpture"--you will excuse the pun--I knew I had to see that Gian Lorenzo Bernini show or bust.

The largest ever exhibition of Bernini works, it includes 28 bronze or marble busts, 13 Bernini portrait drawings, a sample of sculpture by Bernini’s contemporaries, such as Giuliano Finelli, Alessandro Algardi, Francois Duquesnoy , Francesco Mochi (the comparison underscores Bernini’s genius) and a number of paintings of some of Bernini’s bust subjects (most notably a Guercino portrait of Pope Gregory XV, the remarkable Van Dyck three -sided portrait of King Charles I which served Bernini as a model for a lost bust he did of the king which perished in a London fire and a triple portrait of Cardinal Richelieu, by Philippe de Champagne, which, rather likely, was used by Bernini as a model for his bust of Richelieu--whom Bernini never met--in the show). Except for Bernini’s justly famous Saint Teresa in ecstasy, from the Roman church of Santa Maria della Victoria, most of Bernini’s most notable portrait busts are on view: Scipione Borghese, Costanza Bonarelli, Cardinal Richelieu, Louis XIV, popes Urban VIII, Alexander VII, Innocent X, Clement X and Gregory XV, the striking bust of the English dandy, Thomas Baker, with its tour de force, exquisitely carved, marble lace shirt front and cascading hair curls. Bernini who was famed for capturing his subjects in speech and action--what the art historian Rudolf Wittkower calls ’speaking likenesses’-- demonstrates both the virtues of Italian baroque (a combination of virtuosic naturalism and kinetic emotionalism) and that Bernini could achieve in marble a kind of activity and motion usually only found in bronze.

I looked in vain in the exhibition or the catalogue for any explicit connection between Bernini and the Jesuits. Bernini had, to be sure, sowed his wild oats as a young man. One sees this in his well-known bust of Coztanza Bonarelli, Bernini’s mistress and the wife of his assistant. Her "disheveled privacy captured in surprise" is a highlight of the show. But when Bernini finally married, he became authentically religious and was deeply influenced by the Spiritual Exercises of Ignatius. It is said that Bernini carried a copy of the exercises with him constantly. He prayed daily at the Gesu, the chief Jesuit church in Rome. Someone even has suggested that Bernini’s baroque realism and kinetic emotionalism in sculpture was truly influenced by the famous Ignatian method of ’the application of the senses’.

Bernini sculpted, for the Gesu, a portrait of Cardinal Robert Bellarmine in prayer. On his advice, the Jesuit general hired the, then, somewhat little known protégé of Bernini, Giovani-Battista Gaulli, to execute the famous ceiling mural of the Triumph of the Name of Jesus at the Gesu. Bernini was the architect of the lovely church of the Jesuit novices in Rome, San Andrea al Quirenale. Indeed, the art historian Venturi once said of Bernini that he was "the most powerful advocate of the Society of Jesus." A close friend and advisor of the Jesuit General Superior, Gian Paolo Oliva, Bernini’s advice surely fed into the close connection between Jesuits and the baroque style in art and architecture. Bernini even supplied frontispieces for Oliva’s published sermons. Oliva, in turn, helped to broker Bernini’s commission to do a bust of Louis XIV and another commission from Louis (which fell through) to design the east front of the Louvre.

One of the most remarkable busts in the show, that of the physician, Gabriele Fonseca, in prayer (from the Fonseca chapel in the church of San Lorenzo in Lucina) is part of a larger motif of that chapel commemorating Our Lady of Suffering. Jesuits may not know that Fonseca (a close friend of the Jesuits) was famous, in his time, for his ardent championing of the medicinal remedy, quinine, (called, at the time, the Jesuit powder), which the Jesuits from Peru sent back to Europe to combat malaria.

Two memorable portrait drawings, each a self-portrait, in the show demonstrate what may have happened to Bernini between his period of sowing his wild oats and his close engagement with the Exercises. In the first, dating from 1625, we see a young, vibrant and confident Bernini who leaves, as the catalogue puts it, "the viewer no option but to confront and engage the artist". Another self-portrait of the artist, in his early eighties, by stark contrast, shows a searching investigative face. Reminiscent of Rembrant’s late self-portraits, it plunges the viewer, with Bernini, into self-examination. Seeing this exhibit, I found it hard to escape the judgment of the art historian, Kenneth Clarke, who claimed of Bernini that" as no other artist in history, this greatest image maker of the century has been able to carry through a vast design on a huge scale over a long period, resulting in a unity of expression that exists nowhere else in the world."

John A. Coleman
Show Comments (
5
)
Comments are automatically closed two weeks after an article's initial publication. See our comments policy for more.
14 years 4 months ago
This was a wonderful review. I don't know why but it reminded me of something the late Czeslaw Milosz once wrote. He wrote that towns in Latin America reminded him of towns in Lithuania. Invariably there is a huge, Baroque church built by the Jesuits that dominates the town architecturally. I live in San Francisco. Perhaps is time to make a long overdue trip to Los Angeles.
14 years 4 months ago
Historian Hugh Trevor-Roper, a long-time scourge of the Jesuits, has an amusing comment about Bernini’s Rome in his “Letters from Oxford.” That city offered some of the few delights in his 1947 travels. He wrote to Bernard Berenson: “I don’t care twopence for those rubbishy remains of antiquity & have a genuine sympathy for the cultivated Barberini who made such better use of them.” The footnote explains: “The Barberini family, which included Pope Urban VII, employed Giovanni Bernini (1598-1680) as architect of the Barberini palace and library in Rome, and commissioned him to sculpt the triton fountain in Piazza Barberini. Supposedly at Bernini’s prompting, the Barberini tore out the ancient bronze girders of the Pantheon to make cannons for one of Rome’s defensive forts.”
14 years 4 months ago
»Supposedly at Bernini’s prompting, the Barberini tore out the ancient bronze girders of the Pantheon to make cannons for one of Rome’s defensive forts.« No, they used it for the Baldachino in St. Peter's: »Quod non fecerunt Barbari, fecerunt Barberini«... http://www.saintpetersbasilica.org/Altars/PapalAltar/PapalAltar.htm
14 years 4 months ago
Lovers of the Ecstasy of St. Teresa owe it to themselves to visit another marvelous sculpture of Bernini that is not quite as well known: that is, The Death of the Blessed Ludovica Albertoni, in the Church of San Francesco a Ripa in Trastevere in Rome. Well worth a visit and in Trastevere's narrow byways you will avoid the crowds and traffic and find a marvelous place for lunch or dinner nearby!
14 years 4 months ago
This is off the subject, however, I wanted to let people know about Fr. Arthur Poulin, OSB Cam. He is a Camaldolese Benedictine monk at Incarnation Monastery in Berkeley, California. Incarnation is a dependent monastery of New Camaldoli Hermitage in the Big Sur, California. Over the centuries there have been many Camaldolese monks who are artist. There will an exhibit of Fr. Poulin's art for the period October 4 to November 4, 2008 at the I. Wolk Gallery in St. Helena, California. http://iwolkgallery.com/artists/Father_Arthur_Poulin/index.html