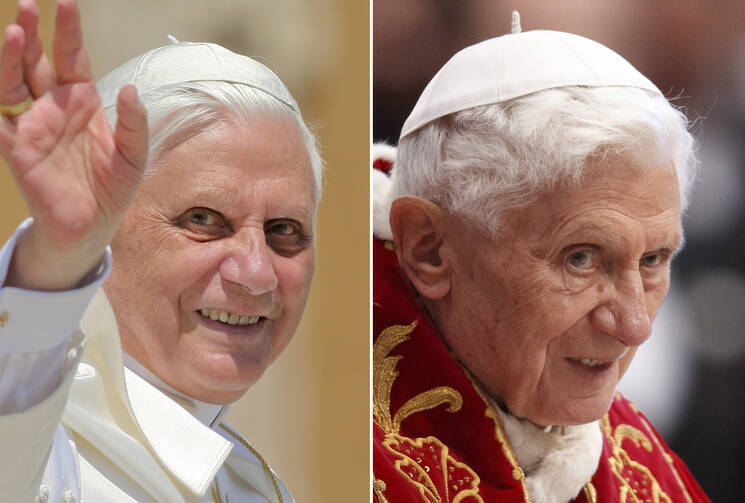 This morning's news that Pope Benedict XVI resigned came as a surprise, but it did not shock me. For Benedict has shown devotion to Celestine V, the sainted pope, who resigned, was then murdered, and defamed by Dante because his abdication—in the Inferno Dante called it "the Great Refusal"—opened the way to civil war in Italy. After the earthquake in Aquila, Italy, in 2009, Benedict made a pilgrimage to Celestine's tomb. By some reckonings, it was his third visit there. It could have just been devotion to the memory of "a humble Christian," as the Italian writer Ignazio Silone called Celestine. Now, it may be seen in a different light as a prayerful step toward resignation.

Especially on the Catholic Left and in the United States, where women theologians like Elizabeth Johnson and Margaret Farley were censured and the Leadership Conference of Religious Women came under investigation, Benedict's papacy has been regarded warily. Major reforms in the liturgy, like the new English translation and the extraordinary (Latin) form of the Mass were imposed on skeptical English-speaking celebrants, and reconciliation with the Lefevrists was pursued beyond all reason. He never seemed to appreciate the depth of the desire for accountability by bishops in the sex abuse scandal. These issues will remain neuralgic for sometime to come. But Benedict also made many positive contributions that should not be ignored.

His encyclical Caritas in Veritate, with its affirmation of structural reform as "political charity" and his call for a global authority to regulate the financial sector, may be the most radical since John XXIII's Pacem in terris 50 years ago. Though not a diplomat himself, he conducted extraordinary visits to Turkey, Britain and the Holy Land. His address to the British leadership in Westminster Hall was both a diplomatic and personal triumph.

Following adverse Muslim reaction to his Regensburg lecture, he showed courage in going to Turkey and there succeeded in rebuilding relations with the Islamic world. In the U.S. and Britain, his apologies to victims of clerical sex abuse, though necessary, greatly eased relations in the host countries and their Catholic populations.

At times, there seems to have been a disconnect between his formal decisions and his pastoral sensitivities. He condemned "the dictatorship of relativism" but genuinely appreciated the spiritual yearnings of unchurched young people and asked them to prod the church into authenticity. While the ham-fisted establishment of the special ordinariate for Anglicans who wanted to come-over to Rome offended many, including members of the Roman curia, he soon resumed cordial relations with Rowan Williams, the Archbishop of Canterbury.

Benedict's pastoral gifts were seen in his Angelus talks on the lives of saints of the day. He showed knowledge and appreciation of  the saints, but also a singular ability to uncover their relevance for believers today. His meetings with local priests during vacations in early years of the pontificate showed surprising awareness of the realities of everyday pastoral ministry. Similarly, some of the early ad limina addresses to visiting bishops' conferences showed a fresh, independent sense of personal care for the universal church refusing to hand along the truisms handed him by the curia.

Whatever the shortcomings of this papacy, in his resignation he has demonstrated the humility of  "a simple Christian."  As he "Papa Ratzinger" retires, we ought to be thankful for the many good things he has done and pray that his remaining days will be filled with peace.

Drew Christiansen
Show Comments (
2
)
Comments are automatically closed two weeks after an article's initial publication. See our comments policy for more.
bill halpin
9 years 6 months ago
As fellow simple Christians, I wonder if we might let our imaginations soar. Is it possible a time is at hand for the allowing of an awesome and terrible inspiration? ("Terrible" in the sense of a swift sword cutting away the no-longer-needed for the what-is-to-come.) What mysterious grace might be at work in the election of what comes next? Perhaps a triadic innovation. The Spirit of the ever-new just might rattle the conclave with mind-numbing change: we will elect a cleric, a religious, and a layperson -- one of whom must be a woman. These three will begin a new thing. Scripture leads: "See, I am doing a new thing! Now it springs up; do you not perceive it?" (Isaiah 43:19) Was Benedict attuned to the kairos-in-waiting? Come Holy Spirit, and renew our faith in what is of God with us!
Mister Heche
9 years 6 months ago
God speed to Pope Benedict. The wonderful story that is the Church continues on into the future! Are you a Catholic who has been away from the Church for a while? Come Home! Or, do you simply want to learn more about Catholicism? A moving, two-minute video on the beauty of Catholicism and the contributions of the Catholic Church to Western Civilization can be found at the link: http://allhands-ondeck.blogspot.com/2012/04/catholics-come-home.html