The Battle of the Nuns 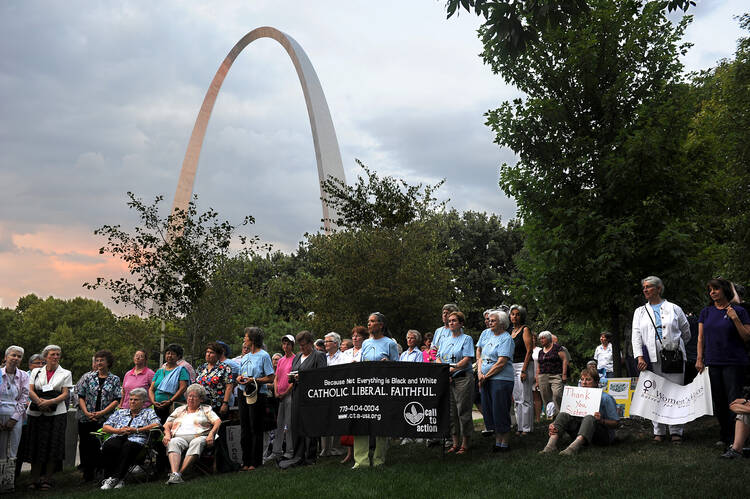 “In a selfish world, they epitomize selflessness and compassion.” (New York Times, 9/17) Who’s that? It’s rough out there. Maybe he’s taking about well-trained, kindly policemen.

One of the remarkable cultural developments within the American Catholic Church during the last few years is the emergence of women religious in the public consciousness in a way never before experienced.

It is certainly due in part to the march of feminism itself, so that just as more women are working, running corporations, serving in Congress and assuming university presidencies, so too do members of women’s religious orders assume leadership in the church, both intellectually as scholars and collectively fighting for social causes. And the response within part of the church hierarchy has been, to put it mildly, negative. Meanwhile the most fascinating response to this has been from lay intellectuals, both Protestant and Catholic.

New York Times columnist Nicholas Kristof, not a Catholic but committed to the same social justice causes as the Catholic church, writes that nuns today are not cloistered in convents: “I see them so often risking their lives around the world, confronting warlords, pimps and thugs, while speaking the local languages fluently.” He introduces us to a Sister Megan Rice who established a school in Nigeria in an area without electricity or running water, then returned to the U.S. where, age 82, she broke into a Nuclear complex in Oak Ridge, Tenn., to call attention to the nuclear threat. Others, such as Sister Jeannice Gramick, a founder of New Ways Ministry, led the way in the acceptance of homosexuals. The sister told her critics “it isn’t about sex. It is about love.” As a result the Vatican in 2012 reprimanded a group of nuns for promoting “radical feminist themes.”

Kristof asks why Pope Francis has not come to the defense of the nuns. Meanwhile the great Catholic novelist Mary Gordon, taking off from the interview with Pope Francis in America, asks in Harpers Magazine, “Is the new Vatican all talk?” (August 2014). American nuns, she writes, may have taken special note of the pope’s new emphasis on the poor rather than on sexual morality. Since the sex abuse crisis, she says, America’s nuns have been the de facto leaders of America’s liberal Catholics. “Like Francis himself, these women have been reprimanded for failing to give sufficient attention to abortion, contraception, and gay marriage. Rather two separate Vatican bureaucracies have launched investigations of American nuns.”

In fairness to Francis, she says, the church’s male leadership and its women religious have clashed throughout history. In a fascinating two pages she summarizes the relationship. Three examples: Benedictine nun Hildegard of Bingen (1098-1179) was excommunicated for burying an excommunicated nobleman in the convent’s graveyard. She refused to dig him up because he returned to the church before he died. In retaliation the bishop refused the sacraments and the right to sing prayers to the nuns. In 1871, Mary MacKillop, Australian founder of the Sisters of Saint Joseph of the Sacred Heart, was excommunicated when she disclosed that a priest was sexually abusing her school children. The bishop admitted his mistake on his deathbed. She was canonized in 2010. Margaret Anna Cusack (1829-99), a convert to Catholicism, raised money to help the poor and founded the Sisters of St. Joseph of Peace. Archbishop Corrigan of New York thwarted her efforts and convinced other American bishops to do the same. She left the church and died and Anglican.

When the document dealing with the purported moral failures of the Leadership Council of Women Religious was distributed in 2010, just after the nuns’ letter to Congress supporting President Obama’s healthcare initiative, across the country demonstrations and prayer groups responded with 60,000 signatures protesting the disrespectful treatment of these women. Ms. Gordon asked one leading nun why she retains her commitment to her religious order and the Roman Catholic Church. The nun replied:

Why would I leave a way of life that has been so fruitful for me, that’s given me so much. That allows me to live in a way that is so right for me? We offer community, we offer a real spirituality, we know how to listen, we know how to be with the dying. It’s very precious. I wouldn’t let it go. And I’d much rather focus on that than on the famous ‘dwindling numbers’ It’s not about numbers. It’s about who we are, what we are and can do in the world.