In Bangui, Fearing Your Neighbor 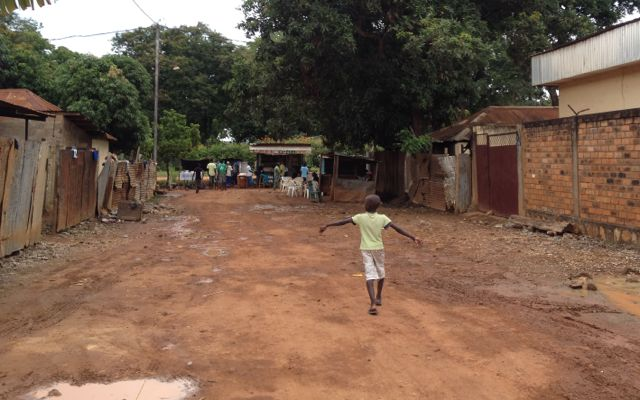 In Bangui before the violence between the city’s Muslim and Christian communities reached a crescendo in recent weeks, life was hardly easy in the first place. Unemployment and poverty are sky high in this capital of the Central African Republic, a land-locked nation with a modest tourism trade, some mining interests and little else to offer. There are not many job opportunities outside of civil service even for educated young people. The ones fortunate enough to have secured those coveted positions haven’t been paid for months as the already weak government disintegrated further in the aftermath of the Seleka’s aborted takeover of the Central African Republic last year.

Everyone appears to be scrapping to get by, but the city streets are again at least teeming with people and traffic. That’s a positive development since over the last year Bangui residents have been frequently forced to hunker down at home to avoid outbreaks of violence. Now many of this capital city’s Muslim families have left Bangui, a large contingent moved out in a convoy on April 27, protected by French and African Union troops. Their community was spectacularly looted by jubilant neighbors in the immediate wake of their departure.

Those Muslims who remain maintain self-defense groups against attacks by anti-balaka gangs, who in their turn had formed in response to previous violence from Seleka-dominated and inspired groups. Last night a young Muslim man was murdered in PK 5, a district where most of the violence that continues in Bangui is focused as hostile neighbors remain pressed together, each deeply suspicious of the other. The Muslim youth’s body was mutilated, decapitated and finally displayed by his one-time neighbors. The rest of the community prepared for the reprisal efforts which came later that night.

People struggle to understand how this affliction of communal violence began, but no one seems fully capable of explaining how one-time neighbors could suddenly turn on each other and how the intensity of that  violence so quickly accelerated. The outlines of the story are well known; Seleka forces came down from the north and overwhelmed the local police and security forces, deposed the government and then began a vicious campaign against Christians and any Muslims who were lukewarm to their maximalist message. The brutality of the Seleka was unspeakable; escapes were harrowing.

The anti-balaka militias arose in response and eventually drove out the Seleka, though their remnant and those “trained” or inspired by them remain in Bangui, a source of constant anxiety for the Christians and a justification for the violent excesses of some within the anti-balaka gangs. Despite such excesses, they have many supporters among the thousands still too afraid to venture back to their homes, assuming their homes have not been burned out or pillaged into ruin. “I never heard of this ‘anti-balaka’ before,” one internally displaced woman tells me. “They are not ‘anti-balaka’; they are like you or me. They are people who have lost family; they have lost their homes. They are just defending themselves.” They are merely seeking revenge, she says, for the suffering they have experienced.

Today the security report distributed among Catholic Relief Service staff is full of warnings and cautions. People should not make any unnecessary travel plans, in or out of the capital. The CRS and other NGO staffers have the luxury, if it can be so described, of preparing themselves to escape or ride out any potential conflict. Those who live in the terrorized districts of Bangui have only themselves, and their one-time neighbors, to rely on.