Back from India III: On Visiting Hindu Temples

Cambridge, MA. This is the third of five reflections on my recent trip to India, my 12th or 13th to the subcontinent. After some general comments on why I love visiting India and on caste. I turn now to one of the simplest and best religious opportunities available to those who visit India and avoid being simply a tourist or on a business schedule: namely, visiting Hindu temples. Anyone who visits India regularly has her or his own way of connecting with the culture, but I have always found visiting temples, preferably smaller temples that are not on tourist lists, one of the best ways to “get inside” India.
There are temples everywhere in India, some in places of dramatic natural authority — a hill top, the confluence of several rivers, the sea shore — and some connected by long tradition with a miraculous event or divine appearance. But many other temples seem to honor deities, gods and goddesses, in very specific locales, such as the base of a large tree, a rock imbedded in the roadside, or a place where someone built a shrine, long ago, in gratitude for prayers answered. Some temples honor great deities such as Rama or Krsna, Shiva or Kali or Sri Laksmi, while others, particularly goddess shrines, name a deity who seems to be known, by that name, only locally. And, of course, one finds everywhere shrines to Ganesha, the elephant-headed god, or to Hanuman, the monkey-deity who served Lord Rama in total devotion. (I will leave aside the fact that most Hindu homes have small interior shrines, sometimes in the kitchen, where daily worship is offered.)
Most temples include large compounds, open to the air, surrounded by walls, and with impressive gates and towers by which one enters. Inside a temple compound, there are expanses of cool stone, patios on which to sit, and small shrines one may visit in circling the courtyard. Some temples have pools for purification, and some have shops, particularly for ritual items related to worship, even inside the temple walls. Often, particularly in large cities, such temples provide the only open spaces, and they offer respite in the evening from the congestion of the surrounding streets. Music may be performed; on the walls of the temples, the poetry of ancient poets saints is inscribed; people sit, chat, watch others passing by. At the center of the courtyards, are the inner holy shrines, either a single main one, or several, for related deities, or for the male deity and his female consort. Some of these are marked “Hindu only,” but in many temples anyone who will enter reverently and quietly (and without camera) is welcome. There are rarely set times for services in temples, though morning and evening are favorite times to visit, when the prescribed worship of the deities occurs, offerings are made (usually fruit and vegetables, and with incense, flowers, oil lamps), and prayers offered by priest and devotee.

On this trip to India, I again made it a point to visit temples in each of the places I visited: in Jaipur, the relatively new and spotlessly clean Laksmi-Narayana temple just near the university campus, and next to that, much older Ganesha and Hanuman temples. Early one morning, a group of us also drove out to Galtaji, a lovely cool site up in the hills, where passing pilgrims come to bathe in holy streams. In Pune, I was able to visit some very ancient cave temples right in the center of the city, and also ascend a steep hill on the city’s edge to the Parvati Mandir, to which devotees come both for worship and for stunning views of the city. In Pondichery, I visited a small shrine on a side street, near to the beach. In Trichy, I could enter (part way, barred eventually by a “Hindu only” sign) into one of India’s greatest temples, at Srirangam: a very large temple expanse with lofty towers, and concentric walls, each surrounding still more closely the innermost holy shrines. While the shrine of the reclining Ranganatha — Visnu Narayana as lord of the temple — is not visible from outside it, the nearby sanctum of the goddess Sri is set up so that even from the outer doorway one can see all the way in. Also in Trichy, I climbed up hundreds of steps to the great Siva temple near the top of the hill known as Rock Fort, and wound my way through the many rooms of the temple, each filled with lovely and holy images, all the way toward the innermost shrine.
But it was in Chennai itself that I was able to make repeated visits to very familiar temples, both in the old neighborhood of Mylapore, the old section of the city, and out in Thiruvanmiyur, where a large Siva temple and several smaller, very popular and crowded goddess temples welcome visitors. I’ve always told my students that it is best to visit temples more than once: first for the novelty, the architecture, and then later on to see the daily worship, the piety of the worshippers, the everyday holiness of the shrines. So I am happy to visit the same temples more than once, and over the years. Some of the temples in Mylapore — the Kapaleshwara temple for Siva, the Keshava and Madhava Perumal temples for Visnu, and the small but (to me) very holy Vedanta Desika temple where Visnu and Laksmi are worshipped in a small enclosed area — I have visited 20 or 30 times over the years and, in some of them, I know people from the neighborhood who welcome me with a smile and greeting.
Of course, the question arises: once we are beyond the must-visit temple stops of the tourist, what exactly are we doing when we visit Hindu temples? First, we are, in a very physical way, entering into Hindu life and spirituality, literally by small steps. It is an opportunity to learn, as a whole person, on a deeply spiritual level. Some Christians, Indian and Western, will not enter temples at all, either because of a prohibition of idols, or because of the spiritual powers at work in temples — or because Christians simply do not visit Hindu temples. But if you do visit, you can decide little by little how far to go: removing your shoes at the door is a must; circumambulating clockwise, as regular devotees do; choosing or not to join your hands in a respectful gesture in the front of the several shrines; entering, or at least looking into, the various holy sanctums, ideally with the knowledge that thus to see the consecrated image — and to be seen by the deity — is a religious action; and then to stand back respectfully, or step forward at touch the camphor flame as the priest brings it by, or sip the holy water (and rub it on one’s head), receive (or not) the fruit, raisins, nuts brought out from the shrine, and to receive a mark of red powder on one’s forehead. All of these actions are possible, as degrees of participation. The setting is such that one goes only as far as she or he is comfortable, can understand and make sense of. 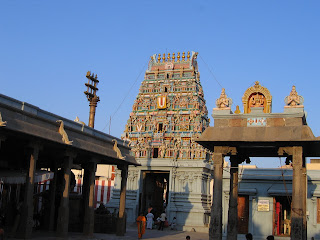 But whether we see ourselves as observers or in some way as guests-who-participate-for-a-moment, the surrounding experience, all five senses touched, creates an atmosphere for prayer that seems right and holy. Temples are, I have found, wonderful places to pray. While many Hindus would be quite happy for us to pray to the deity in the temple, having seen and been seen, it is also ok to pray to God as we know God in the Christian tradition, in this holy place too: God in all things, all places. In fact, the closest analogue I know to a temple visit are the rich, full liturgies of Benediction — smells, bells, Latin hymns — that I remember from childhood, where rich sense experiences and music and worship led us into the presence of Christ manifest in the Eucharist.
There is of course much more to be said, if one were to attempt to write a theology of visiting Hindu temples, theorizing how God is present, who the Deities are, what coming-inside means. But for me, and I think for many others, it has been best to visit, to experience, to pray, without attempting any larger doctrinal claims. I am highly in favor of good theology, but sometimes it is wiser to be still, not-speak, holding off the explanatory impulse.
If you can go to India, do think of visiting temples as a religious act. But if you are reading this in a USA, think of visiting one of the many Hindu temples that are in our cities, towns, and neighborhoods. You can find many listings on the web, for instance at Harvard’s Pluralism Project.
Next week, I will write something on interreligious dialogue as I found it on my trip. But let me know if you have questions or things you want to know about.

Francis X. Clooney, S.J.
Show Comments (
3
)
Comments are automatically closed two weeks after an article's initial publication. See our comments policy for more.
12 years 10 months ago
I learned about Hindu temples like those at Khajuraho in art history - beautiful.  There's a great photo gallery here ......   http://sss.vn.ua/india/madhya/khajuraho/indexen.htm
12 years 10 months ago
I found two things interesting, the analysis of the caves, both inside and out facinating and yet disturbing, both because of your analysis and because of its obvious restraint from judgment, so what is your religious conviction, as well as your spiritual interest?
12 years 10 months ago
Thanks for the lovely reflection, Father.  I've been to India several times and can atest to the five sense experience you speaks of.....like the grand canyon, words and pictures cannot capture India.
What is your perspective on Fr. Bede, Abhishiktananda, and others trying to understand the non-dual tradition of Hinduism?  While in India, I visited Vadana Mataji's ashram and found it intriquing.