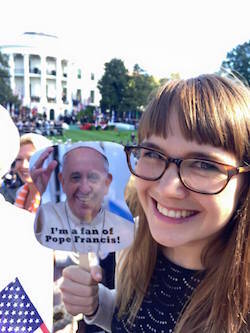 Congratulations to Ashley McKinless, an associate editor at America Media, who has been awarded the 2016 Egan Journalism Fellowship, sponsored by Catholic Relief Services. Along with three other fellows, Ms. McKinless will travel to Honduras and Guatemala with C.R.S. to report on the push factors—from gang violence to climate change—that have forced thousands of Central Americans to migrate to other countries, including the United States, in search of safety and economic opportunity.

Congratulations to all of this year's recipients.

Here is the official announcement:

BALTIMORE, MD, June 1, 2016 – Catholic Relief Services (CRS) announced the recipients of its coveted 2016 Egan Journalism Fellowship, who will travel to Central America in the fall to examine the root causes of migration.

The journalists represent Catholic and secular media and, for the first time, a Spanish-language journalist. They are:

The fellows will travel for 10 days to Honduras and Guatemala to explore the factors that compel people to migrate to safe places, seeing CRS programs that deal with mounting violence and gang activity that cause parents to send their children on the perilous journey to the United States. CRS’ work with at-risk young people reduces child labor and helps children stay in school. Other programs are aimed at young people in some of the toughest neighborhoods in Central America to build life skills, leadership, entrepreneurship and vocational skills to transform their lives and their communities.

“For far too long, children and youth have borne the brunt of these crises – the world needs to hear their plight,” said Kim Pozniak, CRS’ Communications Director. “For the first time this year, we also accepted applications from journalists working in non-Catholic media in order to broaden coverage of the often underreported work of the Church in response to these crises.”
Read the rest here.