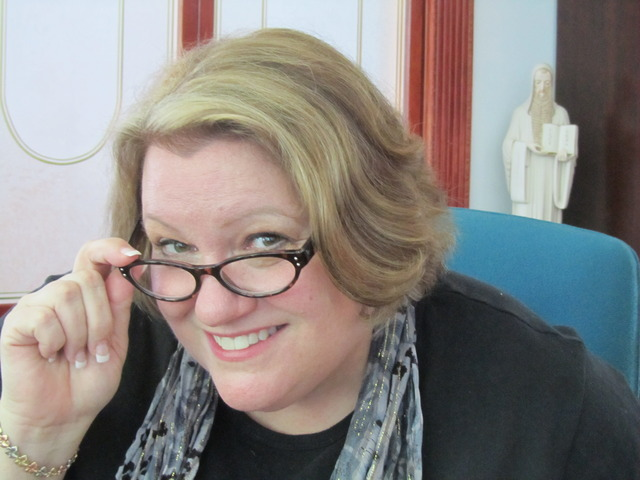 Elizabeth Scalia is an American Catholic editor, writer, speaker and managing editor of the Catholic portal at Patheos.com, where she blogs as The Anchoress. Ms. Scalia is also a Benedictine oblate, a regular columnist at First Things and a featured columnist at The Catholic Answer. Her books include Strange Gods: Unmasking the Idols in Everyday Life (Ave Maria Press) and Caring for the Dying with the Help of your Catholic Faith (Our Sunday Visitor).

On Feb. 25, I interviewed Ms. Scalia by email about her work.

What is the Patheos Catholic portal and why should people care about it?

Well, Patheos is a multi-faith site that began largely as an academic resource; the founders, Leo and Cathie Brunnick, wanted to create an online site where a university student, or a spiritually curious reader, could easily access information about many religions and faith traditions, including historical documents, and that sort of thing. They realized that bringing in bloggers who were living out their respective faiths would give a fuller and more dynamic picture of each religion, and might also promote interfaith dialogue. At the Catholic channel, we currently host around 60 bloggers of varying interests and education—college dropouts to PhD’s—all writing about life, faith, headlines, art, catechetics, theology, psychology and gender, but through a Catholic lens.

What do you do as managing editor?

I seek out strong writers who have something to say about the life of faith—in all of its glories and its teeth-gritting difficulties. While some writers lean left or right, they’re all starting out from a rather centrist position that says, “I may sometimes have difficulty with it, but I do trust and try to live with the teachings of the church.”

To my way of thinking, the struggle is the whole story of faith; writers who are willing to bare and share the highs and lows that come with living an engaged Catholic life become effective evangelizers, simply by the authenticity of their witness. Reading about a young Catholic mother struggling with a contraception teaching that she affirms in spirit but finds challenging in the flesh—and watching the effect that challenge has upon her openness and her spiritual growth—is incredibly powerful, ultimately faith-affirming stuff. I am sometimes asked why there are no stoutly dissenting “progressives” writing in the channel, or Latin-loving “traditionalists,” and the answer is simply this: there are plenty of sites on the ’net where people can find Catholics who would prefer that the church be something different than what she is; they’d like to pretend that the Second Vatican Council never happened, or else they’d like to pronounce that Council as insufficient and move on to a Third. Situated as we are, within a multi-faith platform where at any given moment a Muslim or a pagan or an atheist might stumble in, I feel duty-bound, both to the church and to the visiting reader, to create a place that presents the church as she teaches herself, and give a fair representation about what it’s like to try to live in conformity to those teachings. There is plenty of grousing, but also moments of grace and glory, and no one is saying, “if only the Church would conform to me, instead.”

Or, if they do say it, it’s a wry sentiment, and possibly rye-scented, too.

How did you become a Catholic writer?

I’m a cradle Catholic who grew up rather loving the church but in my 30s I drifted away and signed on to some very dubious explorations that brought me to a dark, and yet rather arrogant place. About 20 years ago, while driving past a church I heard Angelus bells ringing, and decided on a whim to stop in, and make an old-fashioned “visitation.” When I entered I saw a monstrance and candles—I had stumbled into Adoration, which I didn’t know any parish still did. All I can say is I hit my knees and remained there, mesmerized, for what I thought was a few minutes. When I rose to leave, I realized that a solid hour had passed, and in that hour everything had changed. The deeper I have dived into this reversion, the more fascinated, awestruck and consoled I have become. Under the circumstances, a Catholic writer is the only thing I can be.

Why do you call yourself “The Anchoress” on your blog?

When I started the blog in 2004, it wasn’t so unusual for blogs to operate anonymously or under a pen name. Since I tend to have strong opinions that annoy people—and at the time I had kids applying for colleges—I thought writing under cover for a while might be wise, and I needed a persona. So, 1) I’m bashful.  2) If I don’t have to go out, then, like Bartleby the Scrivener, I would prefer not to. Given those realities, plus that fact that the monitor screen is a kind of window opening to the world, “anchoress” just seemed right.

Catholic blogs are sometimes a source of infighting and hurtful exchanges cloaked by the anonymity of electronic communication. In your role at Patheos, how do you navigate those tensions?

“Infighting and hurtful exchanges” is a nice way of putting it. Another way is “Internet Catholics be crazy.” It’s really sad, and these episodes are not always anonymous, either. Some of our bloggers have closed the combox because they’ve just had enough of aggressive people who seem to have no lives and boundless energy for battle; a few of us close them after a set number of days, because generally 48 hours into any discussion it becomes a repetitious indulgence of the obsessed. On social media, if I have the time, and the energy, I’m happy to take on someone who is being aggressive, and sometimes—if the people involved are operating in good faith—that can be very productive and end very well. Once, a four-day discussion over Twitter ended up with someone going back to confession for the first time in years (I went too!). When that happens, it makes the rest of it all seem worth it.

In your view, what do the blogs on your portal contribute to the life of the Catholic Church?

I hope we show the church as something more than an entity that needs to be tamed to the times (or away from them) and something broader, more nuanced, more reasonable and well-reasoned than the Catholic stereotypes we see in popular culture and media. Whether we’re discussing annulment reform, or birth control, or gay issues, or liturgy, or married priests, or the need for continuing adult catechesis, our writers will lean, and lean honestly, but it will be thoughtful leaning, and none of them end up toppling into the caricatures some might expect.

What does it mean to you that you are a Benedictine oblate?

It means I am slowly becoming a human being. The Liturgy of the Hours and the Rule of Saint Benedict are, hour by hour, line by line, divesting me of my feral nature. I hardly growl at all anymore. It’s the truth. Praying the psalms every day puts the whole expressed human condition before my awareness, from 3,000 years ago to today, and helps me realize that nothing I think or feel is particularly new or oddball, and that so much of what we get worked up about is transitory. Being a Benedictine has helped me strip away much that is—as they say in Texas—"Pure-d manure,” and that helps me to find Jesus sooner rather than later.

St. Benedict is my true spiritual father, but you might call St. Philip Neri my spiritual uncle who spoils me. My grandmother, who was a convert from Lutheranism and who would pray the rosary on her knees, every night before bed, then bless herself with holy water, settle in and pull out the racing forms for the next day at Aquaduct. Saint John the Baptist has lately been pulling a lot of my attention. My husband, whose faith is effortless.

I think I used to move through my faith, and my life, like a pendulum, was swinging from left to right, from justice to mercy and back. I’ve come to realize that this is a church of “both/and,” not “either/or,” and that too hard a pull from either side is destructive. As with the Crucifix, true balance begins from the center, which is where Jesus resides. I want to be where Jesus is.

“You have saved me from the pit of destruction, when you cast behind your back all of my sins” (Isaiah 38:17).

One line, one image, and I suddenly understood so much about grace and mercy. And I have needed a lot of both. My favorite psalm is number 90.

For me or the world? For the world, I hope the West can snap out of its benumbed, sated distraction and re-engage with theology and become fascinated, because the rest of the world is still engaged with theological concepts and we need to be able to communicate with them in that language.

For me? I hope my sons live happy lives, in love, and doing what they were born for. I hope my brain holds up, my synapses fire with some reliability, my motor reflexes do not deteriorate too quickly, and that someday my husband and I get to take that trip to Paris we’ve long talked about. Or a Viking River Cruise!

That God is good.

It would be really cool if, when I die and they find my body half-eaten by wolves or something, people would say, “that Christian woman is dead.”

Thanks everyone for reading. I'm glad the interview sparked a little conversation. Let's continue to pray for one another, particularly those among us who are most in need.