An American in Japan...the Jesuit Web and a Visit to Sophia University 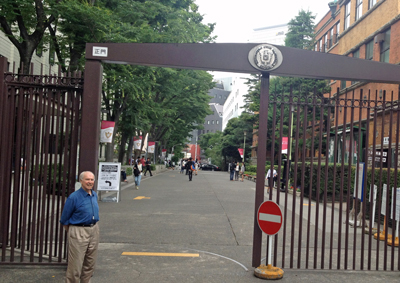 To be honest, it was a speech I'd always zoned out on. If you've been to a graduation ceremony you'll know what I'm talking about. Just after the diplomas are handed out, someone on the dais (whom you've most likely never seen before) steps up to the podium and says "On behalf of our alumni association I'd like to be the first to officially welcome the class of zzzzzzz..."

Having graduated from two Jesuit institutions (St. Joseph's Prep and Georgetown University), I've sat through it a few times. What I remember best from these welcome speeches were the reminders that we were part of a long and illustrious line of graduates as well as full (and, hopefully, soon contributing) members of an extended family of Jesuit institutions. The message was lost on me at my high school and college graduations but its relevance screamed back when planning my trip to Japan.

Before arriving in Tokyo two days ago, John Shea--a New York Jesuit who'd spent years in Asia--put me in contact with Bill Currie SJ. Fr. Currie had taught at Sophia University--a Jesuit institution and one of Japan's most esteemed private colleges--since 1970 and had served as president there before retiring in 2005. I emailed Fr. Currie in Tokyo and received an immediate reply:

"Bill, I've heard a lot of good things about you and look forward to meeting
you in Tokyo. Please give my best to your Dad. Best regards..."

Heard a lot of good things? In Tokyo?!? Say hi to my Dad?

Without realizing it, I had tapped into the extended family that I'd forgotten I was a part of. It just so happened to be on the other side of the planet. In addition to graduating two years behind my father at St. Joe's Prep, Bill Currie was first cousins with Charles Currie SJ, whom I'd known at the Association of Jesuit Colleges and Universities and Rob Currie SJ, who was a good friend of my Uncle Jim. The family ties went even deeper when I finally met Bill yesterday at Sophia and discovered that I'd actually grown up with his nieces and nephews outside Philadelphia.

On my first night in Tokyo I sat with an Australian Jesuit and another Aussie who had gone to the same St. Aloysius College in Sydney. They were many years apart but their conversation was no different than I would have heard from my friends who went to St. Francis Xavier, Regis or Fordham Prep.

When we make the observation that we now live in a networked world, we're referring to digital technology but that's a woefully narrow and impoverished understanding of the term. The fact is, we are deeply connected in far more meaningful ways through countless other types of networks we've been a part of all our lives: families, friendships, classmates, neighborhoods etc. Meeting with Bill Currie and two of his Jesuit brothers in Japan, Bob Deiters and Sali Augustine yesterday was the embodiment of how deep that Jesuit network is and how far it stretches around the globe. [more on my afternoon at Sophia tomorrow].