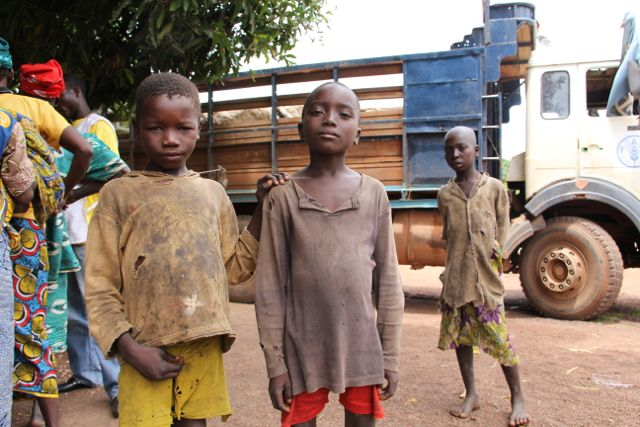 The truck lurches and weaves with every rut and gully on the bush trail—and there are many of them—in slow, but steady progress through to the outlying villages around Bossangoa. The day before two large lorries broke down repeatedly during the same exercise through these small villages that surround this northern Central African Republic city, and this morning, May 3, an adroit mechanic cannibalized parts from a third vehicle to ensure that the others would make it into the bush and back again. The cargo it carries each patient kilometer, corn and peanut seed meant to salvage the growing season, is a  precious, life-saving weight.

“We could be looking at a famine in the Central African Republic in August,” says Kyla Neilan, a program manager for Catholic Relief Services based in Bossangoa, a community hard-hit but the months of disorder and communal violence in C.A.R. “It’s make or break this harvest season. If people have food to eat in August, they can start to recover. If people don’t have seeds in the ground now, and they have no crop in August … people will start to die.”

The church’s international relief and development agencies Catholic Relief Service/Caritas aim to get seed along with cultivation tools to as many as 10,000 families in the subsistence farming villages which surround Bossangoa. There is no small amount of haste to these efforts, and each day a truck breaks down and reduces the reach of the relief agencies is a frustrating worry. They have to get seed and tools to all these families by the end of May. The rainy season has already begun; soon these hard, copper-colored trails will become essentially impassable, red mud that will leave truck wheels spinning futilely. By then it will be too late to sow.

The hunger is already upon these villagers. In nearby Bamzenbe Doctors Without Borders are treating children suffering from acute malnutrition or opportunistic infections their hungry bodies are too weak to resist, Neilan reports. People are “languishing” without the strength to plant crops or find work because of malnutrition.

Next year, with another harvest missed, hunger will become a mortal menace to thousands of people around Bossangoa and other regions of the country. Last year in this northern region of the republic, Seleka rebels—joined by allies among the Peuhl, a nomadic tribe of cattle herders, long at odds over land use with the region’s farmers—swept through these villages. Everything was looted—seed, food, small livestock and tools. Huts were pillaged and put to flame and people were burned to death as the survivors fled into the bush, where many still remain, uncertain if it is safe to return to villages along the main trail that remain too easily accessible to further attacks from Seleka or Peuhl.

“They got attacked last year during the harvest season,” says Neilan, “which means a lot of the crops went uncultivated and unharvested.” Crops that did come in were trampled and eaten by Peuhl cattle usually prevented from grazing on farmlands by the villagers.

“Throughout the country what we’re looking at is that in August in harvest season every year for eons, just before harvest season is the soudure, [the ‘lean season’],” says Neilan, when villagers have exhausted all resources on cultivation and growing and in the last months before the harvest are reduced to barest subsistence—“one or two meals a day, maybe eating just manioc.”

“But then the harvest comes in and, boom, they’ve got food to eat, they have something to sell, so they have an income, they can buy medicine, they can buy whatever else it is that the they need.”

People in these villages, she explains, are experiencing an early, man-made soudure with months to go before a chance to replenish and to eat.

Making the already dire circumstances worse, “there are no Muslims left in Bossangoa,” Neilan says. Muslims had served as the crucial trading class in the region. Now virtually all have fled to Chad or into Seleka-controlled areas. As the Seleka were driven out of Bossongoa by the anti-balaka, self-appointed, self-defense forces which routed the would-be rebels, a terrible retribution was visited upon the community’s Muslims. They first fled to an internally displaced person camp within Bossangoa, partly supported by C.R.S., but left altogether when Chadian soldiers withdrew from Central Africa in April. Those troops had been perceived as the reliable protectors of the nation’s Muslims.

According to Neilan, Bossangoa’s Muslim community had been quite integrated in the regional market, trading east to west and from Chad to Bangui, the capital. Without them “basically there is no functioning trade anymore. There are few products in the city’s sparse open markets. Seed and tools are now as hard to acquire as soap and other household basics. No one is buying cotton. No one has the upfront money to pay farmers for cash crop.

“You can’t eat cotton,” Neilan dryly notes. Without the Muslim traders the crop is worthless and a valuable source of revenue is lost.

There is no telling if those Muslims market-makers will ever feel safe enough to return to their homes. In the meantime trade is bound to suffer and it may take years for the regional economy to restore itself, if it is able to at all without the Muslims.

In the meantime, “we are giving out seed,” says Neilan.

“If they get the seed in the ground before the end of planting season, before the rains are done, they’ll have a harvest in August [and] we can stop this downward cycle,” says Neilan. “It is not going to be a full harvest. We’re not able to give everybody enough seed so that they can completely recover everything, but it will be something where they can stop, they can have enough, they can have something to sell, something to eat and can start to rebuild their lives.”