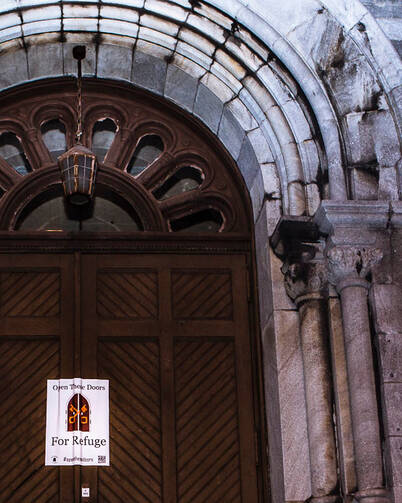 At the start of Advent this year, a new website went online with a headline that is half a prayer and half a demand, in the idiom of a hashtag: “#OpenTheseDoors.” Alongside statistics about New York City’s worsening homeless crisis, the site includes an unsigned open letter to Cardinal Dolan, calling on him to open closed Catholic real estate as shelter for those who need it. One of the pages looks like an old-fashioned, gridded Advent calendar. Each day until Christmas, the photo of another church’s doors appears—taken discreetly at night, it seems, lit by a flash. On each door is a sign with a logo and a QR code. It says, “Open These Doors for Refuge.”

The call coincides with this year’s Jubilee of Mercy, which begins today as Pope Francis opens the Holy Door at St. Peter’s. Later this month, as part of the Jubilee, Francis is expected to open the doors of a hostel in Rome for 180 of the city’s homeless.

OpenTheseDoors.com discloses no sponsoring organization or organizers, but I happen to know some of those who helped create it. Alandra Scott is a volunteer with Dominican Volunteers, and Sean McCreight is a schoolteacher. I asked them to tell me more about what they’re doing and what it signifies.

What are you trying to accomplish with Open These Doors? Why now?

Scott: The goal of Open These Doors is to create awareness and promote justice. Many people don’t know that the Catholic Church is the largest landowner in Manhattan. Open These Doors is shedding light on this fact, and holding the church accountable as a defender of those in need, with a specific responsibility to shelter those who are homeless. A home is a human right, and our Catholic Church has claimed to be both a protector and advocate of that right.

Now is a special time in the church. During Advent, Catholics contemplate and prepare for the coming of Jesus. Catholics are always encouraged in this season to reexamine how they anticipate Christ's coming in their daily life. This action is contemplative, but it is also actively making space for the Works of Mercy to be lived out.

How did you find the sites that you’re drawing attention to? Did you visit them?

Scott: The closings were announced online by Cardinal Dolan in early November. We visited 25 churches and tagged them with a sign reading, “Open These Doors for Refuge.”

McCreight: We were first drawn to the sites after hearing the response many New York Catholics had as their parishes were being slated for closure. When the process for identifying places actually began, we used the resources published on the archdiocese’s website that referenced parish closures and consolidations. We paid particular attention to the spaces that are around New York City—Staten Island, Manhattan, the Bronx and southern Westchester—because we feel these vacant properties are most immediately suited to provide the emergency shelter needed to house the 60,000 people experiencing the injustice of homelessness every night throughout the five boroughs.

As a group, we have visited every vacant church space and neighborhood that will be published on the calendar.

McCreight: Each building appeared distinct. It was apparent that life once resided within their walls, and that life can once again joyfully occupy these spaces. All of us were struck by their scale and size. A traditional church building is often impressive when one enters for prayer and worship. The arches and bell towers rise upward, as if to invite reflection on the building’s potential. When occupied, its function and form seem to match, to fulfill each other. However, these structures become daunting when left empty. I often felt the energy that once was begin to dissipate into lifelessness. These buildings can and should be brought to life again.

It would take resources and effort to equip these spaces to provide homes for people responsibly, and on an ongoing basis. Do you have ideas about how this could be done?

Scott: Since shelter is one of the most basic human needs, it is our human responsibility to meet that need. The Catholic Church has the resources to meet the needs of housing people. Once housing is established we can begin to work on the details and necessary efforts to provide services. But this first step of opening the vacant space is the most pressing.

Advent, of course, is only a beginning, a preparation. What do you expect to come of this after Christmas?

Scott: I hope that the action will gather support, and people who care about providing shelter can come together and plan the next step. I hope we can begin to put pressure on the archdiocese and on Cardinal Dolan to open the doors.

McCreight: The action is a reflection on the preparation we are invited to make in our own lives through community, prayerful reflection and contemplation. While Catholics reflect on the season of joyfully welcoming Christ, we encourage that same joyful reflection on real solutions for ending the injustice of vacant spaces. Just as we share awareness of the coming of Christ, we share awareness of this issue and invite others to imagine an end to homelessness.

During Christmas, when the Catholic community responds with joy to the birth of Jesus, letting him enter their lives and homes and places of worship, we also expect that Catholics will respond with the same joy to the idea of opening the doors of church-owned vacant spaces and creating refuge for those in need.

Nathan Schneider
@ntnsndr
Show Comments (
2
)
Comments are automatically closed two weeks after an article's initial publication. See our comments policy for more.
Bruce Snowden
6 years 12 months ago
Why just the Archdiocese of New York? How about all U.S. Bishops tapping into the Spirit’s flow by opening its shuttered Churches for use by the homeless? Of course, Bishops are always and rightly so, eager to improve diocesan solvency, so many may be eyeing the shuttered Churches as a source of great monetary help through selling the property on which the Churches stand. In NYC alone that would amount to multi-millions of dollars, not to mention elsewhere. The decision to open their shuttered Churches would be one way to affirm Pope Francis’ inspired ministry seeking to make real “a poor Church for the poor.” I hope during this Jubilee Year of Mercy the Shuttered Churches inspiration falls on good, not rocky soil, producing fruit, sixty/eighty/one hundred-fold starting in the NY Archdiocese where many good things come from. Jesus wants his Church whom we are to “snuggle close to his merciful heart.” Two kinds of people “snuggle,” little children trusting parental care, and lovers, one to the other. Maybe Bishops should be like little children and trust our Father's Provident care, and as lovers of God simply cling lovingly to Jesus who said, “Come to Me … and I will give you rest.” Then as Advent readings remind, “rough ways will be made smooth” as shuttered Churches become places of refuge for the poor and homeless.
Ignatius Myosurus
6 years 12 months ago
Thank you! I think it's DISGRACEFUL that the Cardinal has closed so many churches. Why would a bishop do that? They WERE Catholic congregations with outreach that served their neighborhoods and furthered the Kingdom of God. Now, they're empty rotting buildings. The congregations weren't very big? Most of them had congregations FAR BIGGER than your average Protestant church, and THEY aren't shutting THEIR doors. And the FIRST Mass had only 12. There aren't many Catholics in the neighborhood? Well, by closing the church, you've just made that PERMANENT. Or worse, they were too poor to give much to the Cardinal's Annual Appeal, so they were targetted in the name of Money. Which would be a SIN. Space in Manhattan is a precious, rare thing, and so many need it. If the Church doesn't use it, they should be ASHAMED.