Absence of historical reflection a weakness of the synod, says Abbot Schröder 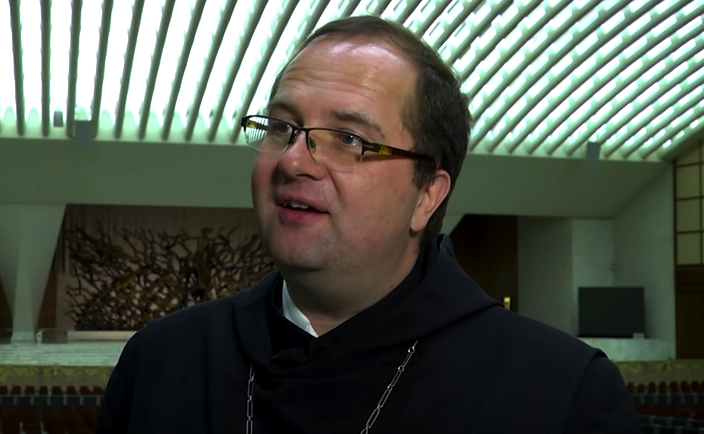 Abbot Jeremias Schröder, O.S.B., a member of the synod of bishops that concluded on Sunday in Rome, told America on Oct. 21 that the relationship of the church to modernity and its own history were “overarching issues” of the synod.

“A real weakness of this whole process has been the absence of historical reflection,” Abbot Schröder said. “What we now consider to be eternal truth was really only formulated at Trent, and that’s not understood by many synod fathers. That was very present for me. As Benedictines, we grow up with a sense of history—everything we have is historically shaped—but that was not very present at the synod.”

Abbot Schröder, 50, is the abbot-president of the Congregation of St. Ottilien, also known as the Missionary Benedictines, a group of about 1,000 members in 20 countries.

“Basically that’s another facet of coming to terms with modernity: that we understand the time-shaped-ness” of everything, Abbot Schröder explained. “When you do that, some will accuse you immediately of weakening the teaching office or weakening doctrine,” but really, he said, a good teacher is “actually understood by the ones he is addressing.”

The church “has a lot to learn still, and a lot to do, I could tell.”

The synod of bishops, which met in two sessions a year apart, sought to advise Pope Francis on the vocation and mission of the family in the church and the contemporary world.

On Saturday, all 94 paragraphs of the final document won at least two-thirds support from synod members. Now it is expected that Pope Francis will issue an apostolic exhortation on the topic in the coming months, as is customary following a synod.

In the interview with America, Abbot Schröder described several challenges facing the synod and the church, including the “considerable differences” among synod members on a number of important issues, the “discrimination” of women within the church and the restrictions presently placed on divorced and civilly remarried persons in the life of the church.

Asked about what the Holy Spirit was doing in the Synod, Abbot Schröder said the synod fathers had grown “much closer” to each other, not necessarily in their positions, but in their “manner of speaking.”

They “looked each other in the eye. We have sat very closely—elbow to elbow—in these tiny rooms” for the small groups, which are very diverse, and the experience has “taken a lot of the projections out of the way, how we think about each other and how we talk with each other.”

The “considerable differences” among the synod members related to doctrine, the sensus fidelium and the use of language, he said. And in a way it “confirms what the pope said on Saturday: That the synodal way culminates in the bishop of Rome. He is the guarantor of our unity.”

Now it is becoming “very clear,” Abbot Schröder said, that the unity among the bishops “really needs the strengthening hand of the successor of Peter to give it a shape,” otherwise the enormous diversity would make it “almost impossible” to arrive at a practical result or unified position.

One issue that came up repeatedly in interventions and small group discussions at the synod was that of violence against women within families. The “Instrumentum Laboris,” the working document of the synod, noted that a “greater appreciation” of the responsibility of women within the church could be a “contributing factor” toward their improved status within society.

Concerning that relationship, Abbot Schröder acknowledged it is “very difficult” to discern “clear causality” between the two, but he said the “discrimination of women in the church is a part of a panorama of cultural settings that also permit the mistreatment of women to emerge.”

“It is clear to me,” he explained, “that the unsolved question of the proper role of women in the church—and not just proper but, in one way or another, equal—the fact that this is not solved is a strong signal to the world, a wrong signal. And that is why the church has a responsibility to look at that.”

Asked about the possibility of ordaining women to the diaconate—as suggested in an intervention by Archbishop Paul-André Durocher, Abbot Schröder said the topic has come up “repeatedly” and that it seems to be “one plausible way”—though not the only way—to move forward on the question of women in the church.

He referenced the revision that Pope Benedict XVI made to canon law in 2009 which clarified the distinction between the ordination of bishops and priests who act in the person of Christ the Head, and the ordination of deacons into the ministry of liturgy, word and charity.

“To me that seemed as if some people are trying to prepare the church to open the door in that direction,” he said, while also acknowledging he could be “misreading” it.

In an interview with Vatican Radio on Oct. 21, Abbot Schröder called Archbishop Durocher “very courageous” for even raising the possibility of the ordination of women as deacons.

“A lot of people get into trouble when they start talking about the ordination of women,” he explained. You can be “punished severely…with quite existential consequences” for moving in that direction.

He added that the intervention by Archbishop Durocher was “heard and understood and appreciated by some” at the synod,  but to his recollection “it is not something that the synod in any way took up, either positively or negatively,” since the synod had to deal with so many issues related very directly to families.

Abbot Schröder acknowledged “a big step forward” for the synod with the presence of Brother Herve Janson, the superior general of the Little Brothers of Jesus, as the first lay voting member in the 50-year history of synods.

“It’s clear to me that once you have accepted that a non-ordained superior can be there,” Abbot Schröder explained, “then obviously it is a little wedge in the door toward rethinking the role of women in the synod.” He also acknowledged that the synod leadership could consider it a “fluke incident” and “make sure it doesn’t happen again.”

Even though they could not vote, Abbot Schröder said the role of women in his small group was “very strong” and they spoke “quite freely.” He noted an important contribution by an expert in bioethics who helped reshape a reference in the working document that was “quite obsolete.”

One challenge in his small group, Abbot Schröder explained, was that three of its members served on the writing team for the final document—Father Adolfo Nicolás, the superior general of the Society of Jesus; Cardinal John Dew, archbishop of Wellington, Australia; and Cardinal Donald Wuerl, archbishop of Washington, D.C.—which meant that these three “were taken out all the time.”

“We sorely missed them, especially Wuerl,” he explained.

Cardinal Wuerl “has the most synod experience, and a very balanced approach to many things,” Abbot Schröder said. “He would often encourage our moderator to steer the group in a good way.”

Abbot Schröder said he thinks Pope Francis’ hope is that the synod will “do something positive for families.” In terms of pastoral approaches, Abbot Schröder expressed concern that divorced and civilly remarried Catholics presently experience a number of restrictions in the church, like serving as godparents or on parish councils.

“At least some of these restrictions should be removed,” he said.

In relation to interreligious marriages, he said his small group recommended the development of “meaningful rituals” that allow such marriages “to take place in a religious setting.” He said we should find ways to express “an understanding of the religious quality of the marriage on both sides.”

Abbot Schröder also said it is important to reevaluate our language. He said the commonly used term “indissolubility,” for example, is not just an abstract negative. We need to make it clearer that “we are really speaking about lifelong commitment.”

Then, he said, the “value that is hidden within—the actual content—can shine again.”

Luke Hansen
hansen@americamagazine.org
Show Comments (
3
)
Comments are automatically closed two weeks after an article's initial publication. See our comments policy for more.
Brian Pinter
6 years 2 months ago
“What we now consider to be eternal truth was really only formulated at Trent, and that’s not understood by many synod fathers." Rem acu tetigisti! A major problem the RCC has - among others - is the theological illiteracy of too many among its leadership. The way you hear some of them talk, especially about how the church uses the Bible (eg the notion that Jesus gave us a rule about divorce and remarriage), you would think they are a bunch of fundamentalist southern Baptists. It's embarrassing. I wish there were some way this issue could be addressed. But I suppose that won't happen until a good number of the diocesan seminaries are majorly reformed (or closed), including the North American Tap Dance College.
PHYLLIS ZAGANO
6 years 2 months ago
This is a very, very powerful interview with a very, very prayerful Synod father who connects the way women are treated in the world with the fact that the church refuses to say--strongly and symbolically--that women can image Christ, that women are made in the image and likeness of God.
Lawrence Lyons
6 years 2 months ago
This is all very interesting, but falls far short of the most important event of the Synod; I refer to the Canonization of Mr. and Mrs. Louis and Zelie Martin, the parents of Ste. Therese of Lisieux, a week ago last Sunday, as a Married Couple. the importance of this Canonization cannot be overstated, in view of the secular attacks on the institution of marriage and the Sacrament of Matrimony. The Spirit has given us a specific and concrete example of the marital ideal, and a practical intercessor for married couples who find themselves beset on all sides, by attacks on their status and vocation, which can be classed only as diabolical in nature and ferocity and hatred. It was no surprise that the secular press all but ignored this event, but most embarrassingly the Catholic Press also turned this glorious event and its celebration into a non-event. Shame!!!!