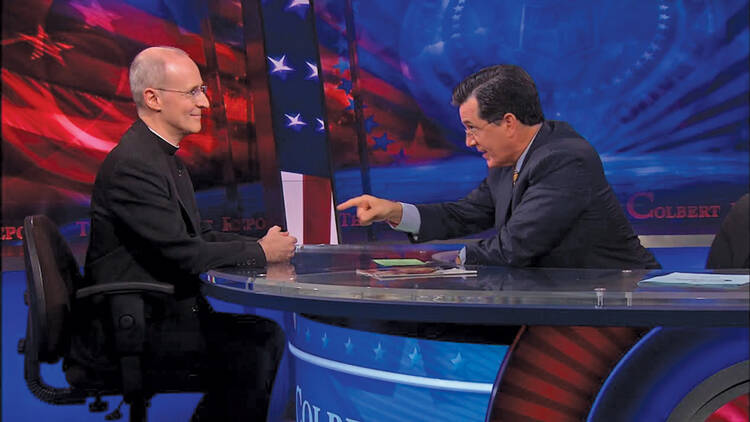 You probably know Father James Martin as Editor at Large of America, but you may not know that he also serves as The Official Chaplain of the satircal news show The Colbert Report. Mr. Colbert is known for his conservative, blowhard on-screen persona, and is a devout Catholic both on and off the air. In the Feb. 3 issue, Patrick R. Manning writes that teachers of the faith could learn a thing or two about evangelization from the charasmatic host, who embodies St. Augustine's formula for effective catechesis: delight, instruct, persuade.

Below are a few clips from Fr. Martin's interviews on the show. You can watch more of his appearances here.

Fr. Jim Martin schools Mr. Colbert on just where Pope Francis is getting all this stuff about loving and serving the poor.

After America's groundbreaking interview with Pope Francis, Mr. Colbert worries the merciful pontiff won't enforce the rules of the faith.

Following the announcement of the papal resignation in February 2013, Fr. Martin explains the significance of Pope Benedict XVI's historic decision.

Fr. Martin discusses his book, Between Heaven and Mirth, and tells Mr. Colbert that Jesus probably had a pretty good sense of humor.