The ways of apathy are many:
in the first instance, you could’ve

hostel courtyard but since you did,
you could’ve chosen not to think

beyond the fact of its peripheral
presence, but you did ruminate,

a momentary sleuth tracing the hues
and patterns to its owner, and still,

may’ve placed on your limbs, but
your hands did carry my bath-towel

across the flight of stairs to the fourth
floor, and then you could’ve simply

knocked at my door, handing over the
spoils of a violent wind, and I would’ve

been profuse in my thanksgiving, and
that would be that, but you chose the

course of holy obscurity, anonymously
placed it along the cloth line opposite

to my door as it hung before, and to this
day I do not know who you are, my

neighbour to the left or my neighbour
to the right, just the memory of this

act of irreducible goodness lingers,
like some obdurate presence in the

mossy earth in a corner of my mind,
demanding, in the first instance, an

acknowledgment that it exists. 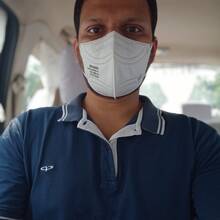