To Be Alive Now, in This Moment of Constant Grief

I could say anything about the rain. How, when split
& shorn into a thousand tiny droplets, it sounds
like a finger run against a forehead. I could say something
about the rain the night a husband talked to us three
young men he called his boys about his wife, who
called us her boys, & who had died months before,
& who had died young. I could say I forgot the rain.
It was out there, though, out there, where each
streetlight burned a fresh hazel of gold around
what seemed a thousand waterfalls suspended.
I could say that, yes. & when the father turned to me
& said y​ou know something about poetry, right?​
I know I said ​yes. &​ when he began, his giggle a high
octave just above grief, an octave, one could say,
to cover grief, to recite from memory the Cummings
poem he recites from memory each night as a prayer,
I could say I felt what rain feels the moment
it touches earth, which is to say like a warm bath
stepping over & on & then all the way through you.
Sometimes someone, instead of saying y​ou wouldn’t
understand, a​ssumes you do, & when they open
their mouth, you can see the rose red of their heart.
& so, when he opened his eyes, it was raining
in the room where we sat, which was inside the rain
outside, which was inside this thing we call the world,
which was inside space, which was inside time, which
is a sort of place where everything happens all at once.
So I could say something about the rain then
being the same rain that fell the day I went to see
his wife dying, his wife who I called my second mom,
who, when I saw her, was so small she could
have slipped inside a pillowcase, who was there then,
& who is here with us now, in this poem, & in the room
where this poem exists, the way you, reading this,
close your eyes at night sometimes to feel less alone,
& the way you are less alone, in that world inside
a world, that world where everything is all right
because nothing has happened yet, & nothing still
happens, even now, & now, & even now longer. 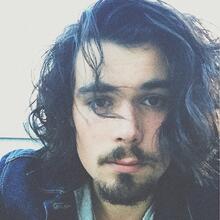 Devin Kelly has published his work in Longreads, The Guardian, LitHub, The Year’s Best Sportswriting and other publications, and has written two books of poetry. He teaches English at Comp Sci High in the Bronx.