Sanctuary of Monteluco in the holy grove, Spoleto

Because five small cells of the convent survive,
because their doors rise to my shoulder—
planks and wooden pillows, because pain
is a dutiful tutor—a shelf and an urn for water,
because simplicity is the sign of faith and water
is its symbol. Because tears.

Because Francis demanded poverty,
after all, because once when he had been ill
he ate chicken—just bone-broth scented with sage
from this hillside of cypress and clover
to recover his strength and shamed himself
so thoroughly that as he entered Assisi
he demanded his brother rope his neck
and drag him through the gate, shouting,
Come, look at the glutton who has been fattening
on poultrywhen you did not know.
Because many flocked to see so strange a sight,
because they wept together and heaved
repeated sighs.

Because they wept for their pain, which is the same
as all of ours, after all, because they wept not
for Francis in his chapel, threadbare Francis
who spoke to the birds on the hillside
in this grove of holm oaks. Because here
in this church coil the chains he scoured
across his back, washing himself clean
of craving, because here the rock is carved out
where he retreated to hide his soul
from the world. Because they all surely wept
for their own souls that wander lost
among the trees, for their thirsts
that cannot be sated, because Francis

released water from the rock here to chase
the thirst of his brothers away: tiny men
with wooden clogs and bodies made of scars.
Because it flows still—this thin coil of water
in the convent beside the tiny cells, rough beds,
and austerity—and their wounds are like ours,
after all, what they hold onto most dearly. 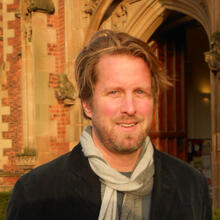 Jeffrey Thomson is a poet, memoirist, translator and editor, and is the author of 10 books, including Museum of Objects Burned by the Souls in Purgatory(Alice James Books 2022). He is a professor of creative writing at the University of Maine, Farmington.