‘There Fell a Great Star’

Amit MajmudarApril 15, 2015
Their shadows flickered and stretched to the west.
The future fixed its lidless eye
On concrete switchgrass, furrows of asphalt.
Telescopes, searchlights aimed on high
Shot the flare of the mind at darkness.
We stood on the moon but failed to scry
The star called wormwood.
The signal changed, but the curbs stayed full
Though seconds before the world was spinning.
Why shouldn’t a light announce the end
When light alone pronounced the beginning?
Men in nooses of patterned satin
Welcomed this end to wanting and winning,
This star called wormwood.
The women who stood on pencil heels,
The cubicle drones of the moneycomb
Were tired of sugar, tired of gold.
They looked to the blaze as a blessed home.
This star was a mercy, this stella maris
That sheltered them in its fusion dome,
This star called wormwood.
We raise our arms against the rain
And find the lines on our palms erased.
The dew is puddle-gray and bitter,
But we learn to love the aftertaste
Here where loosestrife meadows the square
And flash-blind featherless sparrows praise
The star called wormwood. 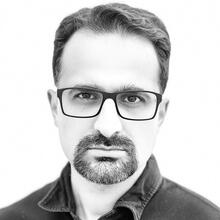 Amit Majmudar is a diagnostic nuclear radiologist who lives in Westerville, Ohio, with his wife and three children. His work has appeared in The New York Times, The New Yorker, The Best American Poetry 2017 and other places. His forthcoming book is a verse translation of the Bhagavad-Gita entitled Godsong (Knopf, expected in 2018).