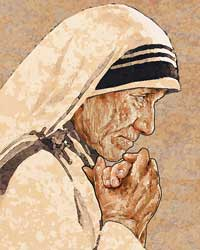 Brutus is wrong. In a world wired for mass communications, it seems that the good people do lives after them and is not interred with their bones. When Princess Diana and Mother Teresa died, television offered countless images of the good that the "Peoples Princess" and the "Saint of the Gutters" had accomplished in their lives. Televisions juxtaposition of these two humanitarians was stunning: the tall young princess and the diminutive, wrinkled nun both lovingly clutching the dispossessed of society. Diana wore Versace while Mother Teresa wore a coarse sari. But by the medias standards, both seemed destined for sainthood. Earl Spencer made an earnest plea against his sisters canonization. But Diana was buried on an island on her familys estate like a modern-day Lady of the Lake.

Media commentators have been calling Mother Teresa a saint ever since she received secular societys first step toward canonization when awarded the Nobel Peace Prize in 1979 for her service to "the poorest of the poor." Since they both died in the same week, the two seem strangely linked in the minds of many of the faithful. When Cardinal James A. Hickey celebrated a Mass for Mother Teresa in Washington, D.C., on Sept. 7, The Washington Post quoted a Catholic couple saying they came to the Mass "to offer prayers to Lady Di and Mother Teresa."

There is a sense in which the media have unwittingly helped retrieve the ancient manner of saint-making. Veneration for the early saints began as a spontaneous response from the people. It was not until the 11th and 12th centuries that an official procedure for papal canonization was established. Any analysis of the medias role in contemporary canonization involves a close look at how they operate. The mass media are not just governed by a distinct set of values; they also have their own particular dynamic. The script they offer for a film star, pop singer, pope or politician can also be discerned for todays media saints:

I. There is an account of some new person with talent for doing something unconventional. A star is born.

2. This is followed by stories about the stars success: a landslide election victory, a blockbuster film, a high rating in the polls.

3. More reports follow that begin to ask if the star can continue to shine, to be successful.

4. Since we are gluttons for titillating stories about our stars, the media feeds us next with stories about how our idol has feet of clay.

5. Next we have reports about how the star has stooped to alcoholism, drugs, sexual misconduct or boredom. The star seems on the way out.

6. Sometimes there are stories of "the comeback kid." A stars image is restored. A happy ending. Often this happens when the star dies.

As Neil Postman has reminded us in his book, Amusing Ourselves to Death, what propels the media (including the news media) is not simply information but entertainment. We are entertained by some form of the above script over and over again. The six-step script shaped the way both Diana and Mother Teresa were presented to us by the media. Step five might not seem as applicable to Mother Teresa as to Diana. But we should remember that the media did try. In 1981 Sister Camille D Arienzo wrote in Brooklyns diocesan newspaper, The Tablet, that Mother Teresa is "an enormously holy and compassionate woman" who was "being inadvertently used by the men in the church" to project a passive image. D Arienza said that church leaders wanted all sisters to get the message, "Be docile, do your womanly caring thing, but dont get out and criticize anything else."

There were also reports that Mother Teresa refused to allow life-long companions of AIDS victims to visit them in her many hospices. Some Latin Americans criticized her for not being open to social analysis--naming the evil structures that produce the poorest of the poor. In a 1994 British television documentary, Christopher Hitchens attacked the quality of medical care Mother Teresa gave. The script was based on Hitchens book, The Missionary Position: The Ideology of Mother Teresa. Hitchens argued that Mother Teresa gave "spiritual solace to dictators and wealthy exploiters, which is scarcely the essence of simplicity, and...preached surrender and prostration to the poor."

Right now the media is presenting us with step six of the script, both for the Princess of Wales and the Jewel of India. We are remembering only the good. But if society continues to crave entertainment, then supply will follow demand. A seventh step will follow (a variation of step five) that will dig up both the sins of Diana and the shortcomings of Mother Teresa. Their place in history will depend in large part on how the public will respond in forgiveness and adulation.

The church usually waits five years before the process of sainthood begins. This is a prudent approach to "initial enthusiasm" about the holy deceased. In the case of Mother Teresa, the church must be careful not to become overly defensive when the seventh step in her script is presented by the media. Church leaders should also be careful about supplying the media with apocryphal stories of Mother Teresa. On the Sept. 7 "Meet the Press," Tim Russert interviewed Archbishop John Foley of the Vaticans Social Communication office. The Archbishop told a story relayed to him by some cardinal. It seems one day Mother Teresa was tending to the wounds of a leper. Someone said to her, "I wouldnt do that for a million dollars." To which Mother Teresa replied, "Neither would I." Those of us who have been around a while recognize that story. It was told about another nun by Archbishop Fulton Sheen at least 50 years ago. There is no need for us to embellish Mother Teresas extraordinary life with such tales.

Whether they like it or not, church leaders must deal with the fact that, as George Gerbner once said, the media are "the cultivators of our culture." Like the church, the media also seek to read the signs of the times. They attempt to define our world and tell us who we are. Like religion, the media mediate meaning. The media have become both the saint-makers and the devils advocates of our time. We need not follow their script, but we had better know what were up against.