2020 in review: Some of the best films you should see from a surreal year for cinema

2020 in review: Some of the best films you should see from a surreal year for cinema 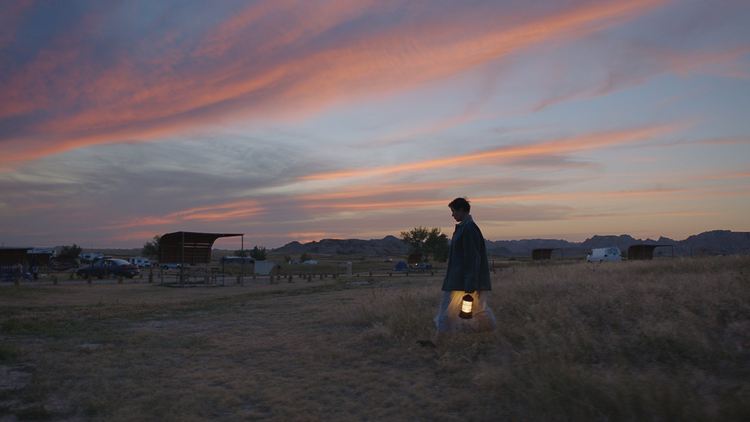 Frances McDormand in “Nomadland,” which played at film festivals in 2020 and will be released to theaters in February 2021. Photo Courtesy of Searchlight Pictures. © 2020 20th Century Studios All Rights Reserved.

In old movie-theater parlance, the “cigarette burn” was the little mark that would appear at the corner of the screen when a reel was about to end, a signal to the guy in the booth that he had to switch projectors. Regular filmgoers might not have been aware of that tiny blemish, but subconsciously they sensed a change was coming, the scene was about to shift, and what they were seeing now would not remain the same.

The pandemic may be the last cigarette burn on the history of motion pictures as we knew them. Unless your livelihood depends on traditional film exhibition, you may not care that much—which is precisely why it seems such a fait accompli. This year, people have realized that certain aspects of life are easier if you do them from home. Work, in many instances; watching movies, in most. Warner Brothers has been castigated for hastening the end of “cinema” by showing first-run films on HBO Max, but the handwriting was on the wall, and in big bold, calligraphic print.

This year, people have realized that certain aspects of life are easier if you do them from home. Work, in many instances; watching movies, in most.

For the purposes of best-of lists and awards ceremonies, this is a confusing time. Where do the movies and end and TV begin? I have spent much of my year immersed in television, and the best thing I have seen is “The Queen’s Gambit” on Netflix, but that seven-episode series is not a movie by any official standards.

So to be honest, I have not seen all the films that came out this year. Or anything close to it. To be even more honest, no critic ever does—between the foreign entries and the documentaries and all the independent productions, you would need a 24-month year to get through everything. But through social media, conversation and scuttlebutt you get a sense of what you should see, and what other people think you should see, as was the case with “Parasite” last year.

This year, such films do not include the woeful “Wonder Woman,” which its studio was touting as the biggest “post-pandemic” feature film of the year (thank you, Dr. Warner Bros.). They do include “Nomadland,” a scathingly honest movie about a social phenomenon: people homeless by circumstance or choice traveling the country in R.V.s and vans, creating a peripatetic community of footloose Americans and seasonal workers, a barter economy, and perpetual need. (“Nomadland” has so far played only at virtual film festivals but is now scheduled for an official release on Feb. 21, 2021.) Frances McDormand’s particular charms are tailor-made for Fern, who had a house once and a life before the U.S. Gypsum Corp. closed its mine in Empire, Nev., and effectively the town itself; her husband died and Fern hit the road, never to look back. Directed by Chloe Zhao, the film is a road movie of sorts, one supposes, but also an autopsy of American frontier mythology.

And what does honesty mean in the movies? In documentaries, it means a search for literal truth, though never without an acknowledgment that the director provides a filter. The best documentaries of 2020—that I saw—include Alex Winter’s “Zappa,” about the rock musician, social critic and experimental composer Frank Zappa; Steve James’s “City So Real,” a five-part series about contemporary Chicago; and Alex Gibney’s “Crazy, Not Insane,” about the psychiatrist and insanity-defense expert Dorothy Lewis. But I’m not sure they qualify as films this year.

In drama, being honest requires the creation of a world that is true to itself.

In drama, being honest requires the creation of a world that is true to itself. “Da 5 Bloods,” Spike Lee’s heartfelt, moving film about Vietnam War veterans, contains many truths. But the characters are often mouthpieces for socio-political positions. Would people actually talk to each other this way? On the other hand, the much-talked-about “Never Rarely Sometimes Always” Eliza Hittman’s “remarkable abortion drama” as the Oscar handicappers have called it, may not inspire a lot of love among America readers, but it has zero false moments. And in the end, it really isn’t about abortion.

Other films that should be on a movie lover’s list this year include “The 40-Year-Old Version,” starring its director, Radha Blank, about a woman reinventing herself with disarming honesty; the animated “Wolfwalkers,” which is a beautiful mash-up of Irish history and mythos; and “The Devil All the Time,” a violent excursion into Southern Gothic religious obsession and serial murder that has its own unique style and force. “Corpus Christi,” which I reviewed for America earlier this year, is a not-to-be-missed moral fable from Poland about the nature of the priesthood and the temptations of the flesh. It is now available on VOD, where we may be seeing everything in the future.

But maybe not. My grandparents were married in New York City in 1918, and yet we never talked about the so-called Spanish flu. We never talked about Charlie Chaplin either, or the advent of radio; it may be that some things were so big they didn’t warrant discussion. Also, by the time I met them, they had been through World War I, Prohibition, the Great Depression and World War II. And each time, life got back to “normal.”

We await the new normal. I hope there are movies.

More from America’s John Anderson on film in 2020: