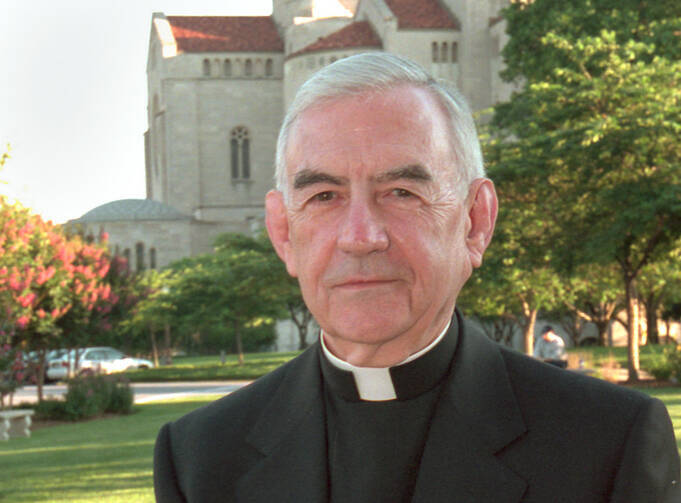 It has been almost six years since the death of Archbishop John R. Quinn, the former archbishop of both San Francisco and Oklahoma City, but the rise of certain issues to the fore in church and society in recent months brought him to mind as I was poring over America’s archives. Beloved as a pastor by many, Archbishop Quinn was also a great scholar of ecclesiology, church history and spirituality; I discovered the last for myself when I was blessed to have him as a retreat director in 2008. He was also a pioneering leader in implementing many of the reforms of the Second Vatican Council in his various episcopal appointments.

In his many articles for America over the years (his first appeared in 1968), Quinn tackled issues ranging from synodality to sex abuse to the priest shortage to abortion. Do those sound familiar today?

In his many articles for America, Quinn tackled issues ranging from synodality to sex abuse to the priest shortage to abortion. Do those sound familiar today?

Born in 1929 in Riverside, Calif., Quinn was ordained for the Diocese of San Diego in 1953 after studying at the Gregorian University in Rome. He was made an auxiliary bishop of San Diego in 1967, then appointed bishop of Oklahoma City-Tulsa in 1971. (You’re reading that correctly: He was made a bishop at 38). When Oklahoma City was created as a separate archdiocese in 1972, Quinn became its first archbishop.

After five years in Oklahoma City, Quinn was appointed to head the Archdiocese of San Francisco in 1977. At the same time, he was elected president of the National Conference of Catholic Bishops for a three-year term, a signal of his growing influence among his fellow bishops.

During his tenure in San Francisco, Quinn appointed Mary Bridget Flaherty, R.S.C.J., as chancellor of the archdiocese, making Sister Flaherty the highest-ranking woman in any diocese in the world. He also reacted swiftly to the AIDS crisis, which hit San Francisco particularly cruelly, by creating a housing program to help AIDS patients remain in their homes; he also donated a convent owned by the archdiocese for use as a hospice.

At a synod of bishops in Rome in 1980, Quinn suggested the bishops find ways to address the widespread Catholic dissent from “Humanae Vitae” on contraception. In the aftermath, he released a statement affirming the church’s teaching, saying that “the intent of my speech was to suggest possible ways of making the church’s teaching on contraception better understood and more widely accepted.”

Quinn was also not afraid to criticize the Vatican’s governance (cited by some journalists at his death as a factor in his never having been named a cardinal), including in a 2001 article for America in advance of the October 2001 synod of bishops in Rome. “Bishops around the world are dissatisfied with the treatment by Roman congregations of episcopal conferences,” he wrote. “This statement is not based on mere hearsay. The bishops themselves in the continental synods (for Africa, Asia and others) have explicitly brought up the subject.” Why do I suspect he would be delighted by the widespread consultation of so many groups in the church in the current synodal process?

Archbishop Quinn was also not afraid to criticize the Vatican’s governance, which was cited by some journalists at his death as a factor in his never having been named a cardinal.

He took the remarkable step in 1987 of publicly taking a four-month sabbatical to deal with exhaustion and stress management. His willingness to be public about the pressures of his job “humanized the episcopacy,” Cardinal Blase Cupich told Tom Roberts of the National Catholic Reporter after Quinn’s death in 2017. “He had, I think, the good common sense to realize that there are times when you need help and you should look for it. It’s part of the human condition to do that. I think he was very astute and honest—there was a real honesty about himself, and I think that bodes well for all of us.”

In the final years of his tenure, Quinn faced criticism for his response to the archdiocese’s financial problems, which included staff cuts and parish closings; allegations of sexual abuse against several high-ranking San Francisco priests also made headlines in the Bay Area. Quinn retired in 1995 at the age of 66, long before the normal retirement age of 75.

After his resignation, Quinn responded in a public lecture at Oxford to Pope John Paul II’s invitation in his encyclical “Ut Unum Sint” for suggestions on how Christian churches might seek closer ties. His talk drew considerable publicity for his criticism of the Vatican’s governance and treatment of bishops, ideas he expanded in his 1999 book The Reform of the Papacy: The Costly Call to Christian Unity. He died at the age of 88 in 2017.

When clergy sex abuse became a national story in 2002, Quinn wrote “Considerations for a Church in Crisis” for America, declaring that “the present crisis in the church must be compared with the Reformation and the French Revolution” and calling for a national policy on sex abuse by clergy, expanded powers for the U.S. Conference of Catholic Bishops and greater involvement of the laity in adjudicating sex abuse cases. “Clearly the church has arrived at a very critical moment in her history,” he wrote. “Clearly too, the future of the church is in peril unless wiser men and women are forthcoming.”

Though his reputation (something reinforced in the many obituaries for him at his death) was that of a political progressive, he broke sharply with his fellow travelers on the issue of legal abortion, which he denounced in a 1989 article for America. Beyond the fact that abortion was the taking of an innocent human life, he argued, a laissez-faire approach to abortion would only lead to further violations of human rights:

If human life in the mother’s womb can be destroyed, what logic can prevent the destruction of the life of incurables in mental institutions, of the chronically ill, of the ‘unproductive’ elderly and of others who may be regarded as a ‘burden’ on society? The right to life is the fundamental right. When the right to life is not sovereign but can be violated for any reason whatsoever, then all other rights are also in jeopardy. Abortion is the axe at the root of the tree of human rights.

The fields of law and medicine, Quinn argued, had given in to pro-choice arguments out of expediency. But, he wrote, “If the soul of a nation is to be great, it must have great moral horizons. It can never allow its judgments touching the inviolability of life to become the pawn of expediency or allow itself to subordinate the right to life to any other consideration.”

Quinn also wrote several articles for America in support of priests and men and women religious. In 2010, America published an edited version of Quinn’s presentation to the National Federation of Priests’ Councils in Houston, Tex., in which Quinn noted that for many priests, the present milieu was a difficult one that could lead to despair: “We priests and the Catholic Church are in a moment of humiliation and some degree of helplessness.” Nevertheless, he wrote, the church had engaged in a similar kind of struggle since its first days:

It is a time for us, like the Apostles in Acts, to give thanks that we are counted worthy to suffer something for Christ. It is not a time for us to be the martyr-victim but the martyr-witness. If anything is emphatic in the Gospel of John it is that the Lord Jesus freely, knowingly and willingly invested himself in the Mystery of the Cross. This is surely a time when every true priest is invited to freely and humbly embrace what Christ Our Lord freely accepted. We priests and the whole church are being called to evangelical humility and to a purer faith.

Archbishop John Quinn: "We priests and the whole church are being called to evangelical humility and to a purer faith."

Our poetry selection for this week is “Crossing the Jordan,” by Brooke Stanish. Readers can view all of America’s published poems here.