A Washington insider with an eye for the outsiders: Mary McGrory 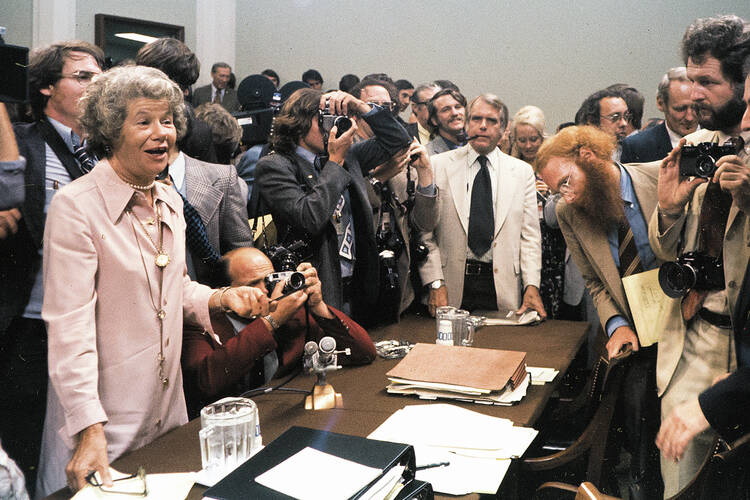 She won the Pulitzer Prize. She dated JFK. She was on Richard Nixon’s enemies list. She wrote more than 8,000 columns on politics between 1954 and 2003. She was known as “The First Queen of Journalism.” And she was a regular contributor to America in the 1950s and 1960s: Mary McGrory.

“Washington Front” was a recurring column in America from the 1950s onward, usually offering Catholic takes on public policy but also sometimes just reporting on the nitty-gritty of the political game. Of the various authors who penned the column, none was better suited for the role than McGrory. She lived among Washington’s power-brokers and knew them all, which made for a life full of intriguing anecdotes and surprising historical moments—and a literary style all her own.

Lyndon Johnson once complained that “Mary McGrory is the best writer in Washington, and she keeps getting better and better at my expense.”

The first in her family to graduate college, McCarthy eventually became one of the most popular syndicated columnists in the country, with over 150 newspapers running her musings on politics at the peak of her fame. She was widely admired for her willingness to wear out her shoe leather in her reporting and for her vast range of sources, and universally feared for her merciless pen.

Lyndon Johnson once complained that “Mary McGrory is the best writer in Washington, and she keeps getting better and better at my expense.” Truth be told, Johnson got off easy. When Richard Nixon lost the California gubernatorial race in 1962, McGrory described his departure as “exit snarling.” She once described Bill Clinton as a “lusty, scrape-prone lad.” Of Ronald Reagan, she said he was a resolute believer in “making life more comfortable for the comfortable.” The 2000 presidential race between Al Gore and George W. Bush? “A battle between the unlikable and the unprepared.”

Like all journalists of good will, McGrory started out writing book reviews, first for The Boston Herald and then for The Washington Star, where she was hired as a literary editor in 1947. Her big break came in 1954, when her daily reports on the McCarthy hearings in Washington made her the talk of the town. McGrory, who never married or had children, reported later that her editors gave her that and other assignments on the condition she not get married.

“She was solidly progressive, quick to take up lost causes and not afraid to tackle abusive authority,” wrote Tom Fox in a review for America of John Norris’s 2016 biography, Mary McGrory: The First Queen of Journalism. “There was also both a predictability and unpredictability to her columns; you knew from where she was coming but not always where she was going.”

McGrory stayed at The Washington Star until it folded in 1981, after which she moved to The Washington Post. In 1975, her coverage of Watergate earned her the Pulitzer Prize for commentary. She continued writing until she suffered a stroke in 2003. She died in 2004 at the age of 85.

A Boston-born Catholic and a political liberal, McGrory was a great admirer of President John F. Kennedy, and devoted many of her “Washington Front” columns to his political campaigns and his short presidency. Her 1961 column after Kennedy’s inauguration (after an eight-inch snowfall) gave a sense of her admiration for him, whom she had first met in 1946 and dated briefly when he was a junior congressman.

McGrory was a great admirer of President John F. Kennedy, and devoted many of her “Washington Front” columns to his political campaigns and his short presidency.

“For those who struggled through the storm and braved the cold, there were rewards, chief among them which was the sight of the new young Chief Executive relishing every minute of the rites and the revels,” she wrote, adding that “Mr. Kennedy was equal to it all. He stayed at the long and rather pretentious Inaugural Gala arranged by his friend Frank Sinatra until 1:30 in the morning, and made a speech of thanks at that hour. The next day in the bitter cold he stood at the top of the Capitol steps and delivered an Inaugural address that struck sparks with his frozen listeners.”

A year earlier, she offered prescient reporting on Kennedy’s attempt to woo voters in West Virginia, where anti-Catholic prejudice ran high. “The expressions on the faces of the Kennedy staff during the last week here were a measure of their dismay in being confronted by such a seemingly unscalable wall,” she wrote in May 1960. However, Kennedy’s appearance on television on the Sunday night before the primary—where he said he would not take instructions from the pope—turned the tide, McGrory wrote.

“The conquest of prejudice, however, means that Senator Kennedy need no longer name his religion as an obstacle to nomination,” she wrote. “More than that, as he said at an early morning press conference at his jubilant headquarters in Charleston: ‘I think that, after the campaign in this State, it will not be necessary to mention it again.’ All present would certainly say a fervent ‘amen’ to that.” Six months later, the United States elected its first Catholic president.

McGrory was deeply affected by Kennedy’s assassination in 1963. Her reaction to the news—and Daniel Patrick Moynihan’s response—have become the stuff of legend. "We’ll never laugh again,” McGrory is reported to have said in the aftermath. “Heavens, Mary,” Moynihan replied. “We’ll laugh again. It’s just that we will never be young again.”

John Norris, the author of the aforementioned biography of McGrory, wrote about her for America in 2015, noting that though “Ms. McGrory’s faith was largely absent from her columns (she objected to proselytizing), it shaped her far more than most of her readers, and even many of her friends, appreciated. Her faith was her moral center.”

Though McGrory lamented Pope Paul VI’s promulgation of “Humanae Vitae,” prohibiting the use of artificial birth control (“to be a Catholic doesn’t mean to be an imbecile,”), she was strongly pro-life, and she objected to what she saw as a view among Democrats “that every single intelligent person is pro-abortion.”

McGrory was also famous for her philanthropic ventures, especially her work at St. Ann’s, a Washington orphanage—and for her strong-arm tactics to get Washington elites to volunteer or donate to her favorite charities (“she who must be obeyed,” Maureen Dowd once said). Tom Fox thought some of her work on behalf of the marginalized was inspired by the blatant sexism and discrimination she herself had faced in her career: “I think McGrory, who had to fight a woman’s way to the table, overturning old habits, ended up also more sympathetic to others who remained excluded.”

"McGrory, who had to fight a woman’s way to the table, overturning old habits, ended up also more sympathetic to others who remained excluded.”

Our poetry selection for this week is “D., Gardening,” by Christian Wiman. Readers can view all of America’s published poems here.