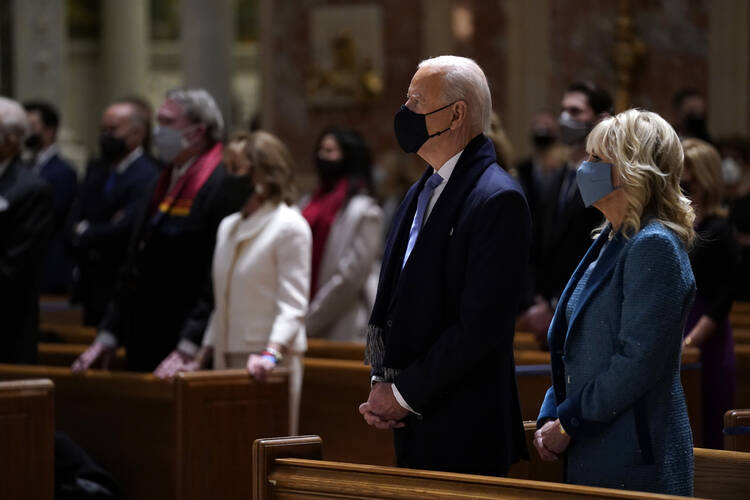 President-elect Joe Biden is joined his wife Jill Biden as they celebrate Mass at the Cathedral of St. Matthew the Apostle during Inauguration Day ceremonies Wednesday, Jan. 20, 2021, in Washington. (AP Photo/Evan Vucci)

Hours before his inauguration as the 46th president of the United States, President-elect Joe Biden, his family, friends and congressional leaders of both parties gathered for Mass at the Cathedral of St. Matthew the Apostle. The priest who presided over Mass, Kevin O’Brien, S.J., told America in an interview that he preached about the duty of public officials to care for the poor and marginalized and God’s promise to stay near to those who believe.

“The very fact that he’s beginning his Inauguration Day with Mass speaks to how important his Catholic faith is to him,” said Father O’Brien, the president of Santa Clara University. “It’s a natural part of who he is.”

Hours before his inauguration, President-elect Joe Biden, his family, friends and congressional leaders of both parties gathered for Mass at the Cathedral of St. Matthew the Apostle.

“I spoke about the noble commission of public servants to care for the most vulnerable and liberate those who are oppressed,” Father O’Brien said, referring to the Gospel reading in which Jesus reads a selection from the prophet Isaiah. From the Letter to the Phillipians, the message reiterated the promise that God is near.

“We have much to look forward to as a country because of your and Kamala Harris’s leadership,” Father O’Brien preached. “Every day, you will strive to heal our nation’s wounds and reconcile differences and bring us together. You know too well the challenges ahead and the cost of service. My deepest prayer for you today, as a priest, citizen and friend, is that you always remember that the Lord is near and no matter the sound and fury around you, that God wants to give you peace, a deep-seated peace that will sustain you.”

Father O’Brien said he met Mr. Biden and one of his sons, Hunter, 15 years ago when they attended Mass at the Jesuit-run Holy Trinity Church located near Georgetown University. Mr. Biden also occasionally attended the Sunday evening Mass at Georgetown’s Dahlgren chapel, sometimes sticking around to chat with students. “It was pretty ordinary,” he said of mixing students with the vice president in a small campus chapel. “That’s the thing about Joe, he’s just very down to earth and approachable and just very friendly.”

“Every day, you will strive to heal our nation’s wounds and reconcile differences and bring us together,” Father Kevin O’Brien preached.

He said he told the Biden family Wednesday morning: “The Lord is near, so no need to worry or to be afraid. One of the surest signs of God’s nearness to us are the people whom God sends our way. Joe and Jill, all the people whom you have gathered here in this cathedral—and so many more—love and support you and will be with you as this new adventure in your life of service begins.”

Opera star Renee Fleming sang “Ave Maria” as well as “America the Beautiful.” A cantor sang “Be Thou My Vision,” “Prayer of St. Francis” and “On Eagle’s Wings,” a hymn that Mr. Biden quoted in a speech the day the election was called in his favor. Gospel singers from Saint Augustine Catholic Church, a historically Black church in Washington, contributed to the music program, and the Irish violinist Patricia Treacy provided instrumental music by Irish composer Patrick Cassidy.

“In my knowing them over the years, it has been very important for the Biden family to ground important moments in their life in their faith,” Father O’Brien said, pointing to the many times Mr. Biden has invoked his faith during his long career in public service and noting also the role that faith plays in the life of Dr. Jill Biden, who was raised Presbyterian. “This day is no different.”

The theme of the inauguration is American unity, and Father O’Brien said he sees the president-elect’s faith as a driving force behind that desire to bring healing to a divided nation.

“His faith calls him to be an agent of reconciliation and he lives that in his public life,” Father O’Brien said. “We might call it bipartisanship, but I think he might also call it building bridges and reconciling people.”

“His faith calls him to be an agent of reconciliation and he lives that in his public life,” he said. “We might call it bipartisanship, but I think he might also call it building bridges and reconciling people.”

“He tries to do that in the church as well, tries to be a bridge-builder given the divisions we face,” he added.

Other Catholic leaders are involved in Mr. Biden’s inauguration.

On Tuesday evening, Cardinal Wilton Gregory, the archbishop of Washington, prayed at a memorial service commemorating the more than 400,000 Americans who have died from Covid-19 since March. With Mr. Biden now residing in the White House, Cardinal Gregory will be his bishop. The cardinal has so far been reluctant to enter the political fray, though he did criticize the Trump administration last year for using excessive force to clear protesters gathered near the White House.

At the inauguration, Leo O’Donovan, S.J., a former president of Georgetown University, will offer a prayer. Father O’Donovan has been close to the Biden family for several years and he presided over the funeral Mass for Beau Biden in 2015.

Two Catholic sisters will provide prayers at an interfaith prayer service scheduled to take place virtually on Thursday, hosted by the Washington National Cathedral. Carol Keehan, D.C., the former head of the Catholic Health Association, and Norma Pimentel, M.J., the executive director of Catholic Charities of the Rio Grande Valley, will be part of the event, which will “include prayers, readings, blessings, and hymns from interfaith leaders, celebrated artists, and other inspiring voices who will come together to mark the beginning of a new national journey that restores the soul of America, brings the country together, and creates a path to a brighter future,” according to a press release.

At the front of St. Matthew’s Cathedral, a commemoration of President John F. Kennedy, who was the first Catholic elected president 60 years ago, is inlaid in the floor. Mr. Kennedy celebrated Mass the morning of his inauguration at Holy Trinity Catholic Church along with about 300 others. Newspaper accounts from that time note that the incoming president slept for only four hours the night before. He did not take Communion because he had not fasted for three hours, and for breakfast that Friday morning, he ate eggs and bacon, receiving a special dispensation for Inauguration Day from meatless Fridays from the D.C. bishop.

Father O’Brien recalled that Mass in his homily as he preached to the individual who will become the nation’s second Catholic president.

“We can only imagine the prayers the Kennedys offered at Holy Trinity Church, six decades ago,” he said. “Like theirs, our prayers today rise up to the God who promises to be with us and who gives us a noble commission to make this world a more just and gentle place.”

Correction: Ms. Fleming sang “Ave Maria” and “America the Beautiful,” not “On Eagle’s Wings.” This story has also been updated to note the composer of Ms. Treacy’s piece.