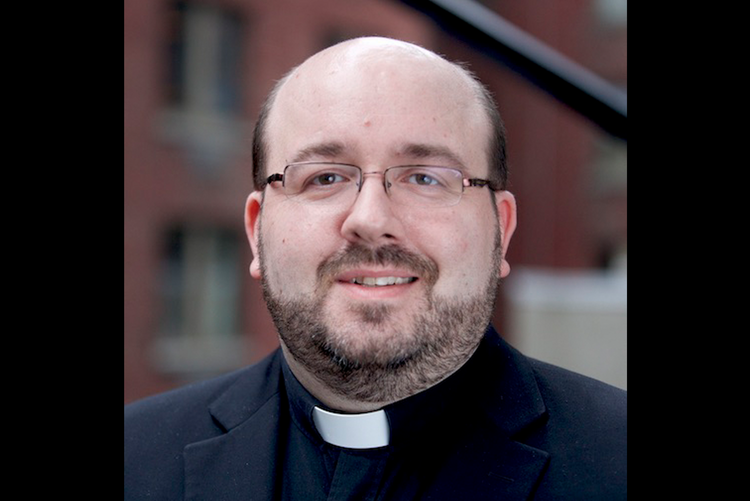 Sam Sawyer, S.J., has been named the 15th editor in chief of America magaine.

America Media will have a new leader beginning Dec. 1.

Sam Sawyer, S.J., will take the helm of the 113-year-old magazine following the departure of the current president and editor in chief, Matt Malone, S.J., later this year. The announcement of Father Sawyer’s appointment as America’s next editor in chief was made at a staff meeting on May 12.

Father Sawyer, a native of Scranton, Pa., and a graduate of Boston College and Loyola University Chicago, is already a familiar presence at America. He joined the magazine in 2015, and he is currently a senior editor and director of digital strategy. With a background in computer science and software development, he oversaw the redesign of the America website and helped lead the transition to a digital subscription-based model for America content. According to a press release, website traffic increased more than 300 percent under Father Sawyer’s direction, with more than one million readers each month.

Sam Sawyer, S.J., will take the helm of the 113-year-old magazine following the departure of the current president and editor in chief, Matt Malone, S.J., later this year.

“Sam has elevated the access to and quality of our content through his leadership throughout our digital transformation,” Susan Braddock, the chair of America’s board of directors, said in a press release. “We look forward to continuing this momentum with Sam in his new expanded role.”

Father Sawyer entered the Jesuits in 2004 and was ordained a priest in 2014. He previously served as an associate pastor at Holy Trinity Church in Washington, D.C., and currently assists the pastoral team at St. Francis Xavier Church in New York City. In 2012, Father Sawyer co-founded The Jesuit Post, a website featuring articles and videos by Jesuits in formation about a range of topics geared toward young people, and he served as an editor for the site.

At America, Father Sawyer is a regular presence at daily editorial meetings, and he has helped produce podcasts and even occasionally takes on tricky customer service inquiries. He has written extensively about pro-life issues and clergy sexual abuse. Some of Father Sawyer’s recent pieces include an essay urging church leaders not to politicize Covid-19 vaccines and a plea with pro-life activists to approach the contentious abortion debate with more empathy. His first article for America, published in 2013, explored the nearly religious-like devotion some people have toward Apple Inc.

Father Sawyer, a native of Scranton, Pa., and a graduate of Boston College and Loyola University Chicago, is already a familiar presence at America.

Father Sawyer will take charge at America at a difficult moment for Catholic journalism and the church as a whole.

Several diocesan newspapers have shuttered in recent years, and the U.S. Conference of Catholic Bishops recently announced they would close the U.S. operations of Catholic News Service, which provides news stories and other content for many publications, including America. At the same time, decreased religiosity in the United States, especially among younger people, have presented demographic challenges to the church.

“America’s contributions to a charitable, informed and faithful conversation at the intersection of the church and the world are more important than ever,” Father Sawyer said in a press release. “I am honored and humbled to help lead America forward alongside colleagues I admire.”

Since its founding in 1909, America has been staffed largely by Jesuits. That began to change over the last few decades and today, the majority of the magazine’s roughly two-dozen editors and staff writers are lay people. While the business side of America is led by a lay executive, the magazine’s bylaws stipulate that the editor in chief must be a member of the Society of Jesus.

“He is singularly qualified to lead America through the next chapter in our long and storied history,” Father Malone said. “I will depart with the certain knowledge that America is in good hands.”

Last year, Father Malone announced he would step down from his role as president and editor in chief in 2022 after leading the magazine for a decade.

Father Malone, who at 40 was the youngest editor in chief appointed to lead America when he took the reins in 2012, led the organization’s expansion into digital media and transitioned the once-weekly print magazine into a monthly publication. The 113-year-old magazine now publishes multiple podcasts, video reports and daily email newsletters.

Father Malone also oversaw the sale of the magazine’s long-time headquarters and Jesuit residence on 56th Street in Manhattan and transitioned the media organization’s operations into a new office, with an accompanying television and audio studio.

During Father Malone’s tenure as editor in chief, America was named magazine of the year by the Catholic Press Association in 2018 and 2019 and won dozens of awards for its reporting, editorials and digital products. Father Malone interviewed then-Vice President Joe Biden in 2015, covering a range of issues related to faith and politics. In 2013, America published the first in-depth interview with Pope Francis, a joint endeavor with other Jesuit journals, and in 2014, the magazine opened a Rome bureau to cover the first Jesuit pope.

“I am delighted that Father Sam Sawyer will serve as the 15th editor in chief,” he said in a press release. “I have had the honor of working with him for many years now, and I have watched him earn the respect of his colleagues and the trust of our readership. He is singularly qualified to lead America through the next chapter in our long and storied history. I will depart with the certain knowledge that America is in good hands.”