Our readers: Do rape and incest justify abortion? 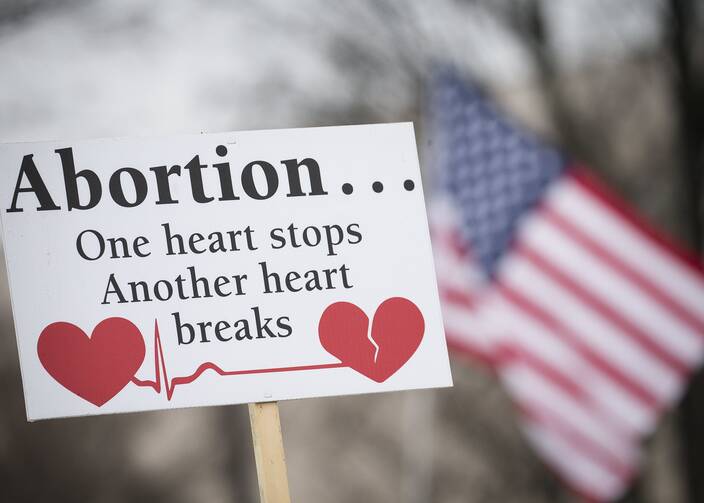 A pro-life sign is displayed during the 2019 annual March for Life rally in Washington. (CNS photo/Tyler Orsburn)

America Media has been hosting an ongoing conversation about abortion, one of the most important and contested issues in the life of the church. Coverage of the topic increased after the leaked draft of the Dobbs v. Jackson Women’s Health decision by the Supreme Court, which overturned Roe v. Wade. An essay by Teresa S. Collett—“Rape and incest are deeply tragic. They do not justify killing a child.”—garnered an unusually large number of responses from our audience. Below are some of the comments, edited for length and clarity.

Each woman must have a choice in how to address her physical and mental health needs in her situation.

On the other hand, there are other women who believe their lives were saved because the pregnancy that resulted gave them a reason to live. Each woman has different needs and support to journey through recovery. Each woman must have a choice in how to address her physical and mental health needs in her situation. This is not a black-and-white issue or us versus them. This is an issue of giving love and compassion and dignity to a woman when that was taken away from her during a sexual assault.
Carol Vollmer-Johnson

If anyone should get the death penalty, it is the rapist not the innocent baby. I’m amazed at the moral inconsistency among those on the left. They are against the death penalty outside of the womb, but for it in utero.
Gregorio Robinson

There is always a deliberateness in the language used. Since so much of this is predicated on philosophical, theological, biological and psychological presuppositions, the simple assertion regarding the killing of an unborn child is itself problematic. I choose not to view a fetus in the first trimester as a child at all, unborn or otherwise. And so the termination of a pregnancy in the first trimester does not involve the “killing of an unborn child.” You might claim that this is arbitrary but perhaps no more arbitrary than deciding that ensoulment occurs 60 days after birth, as Thomas Aquinas sometimes held. To claim that ensoulment takes place at fertilization is not only a choice, but one that should be recognized as having no real evidence (at least no more evidence than Aquinas’s view).
Theresa Willox

There is a lot to ponder in Teresa Collett’s article. There are fathers of the church who held that the body is endowed with a soul at conception. The earliest church document we have after the Gospels forbids both abortion and killing (abandoning or exposing to elements) a newborn, which were common practices in the Roman Empire. Has our thinking become so conditioned by the demand for our rights that we can no longer think of life from the viewpoint of the Gospel? Thanks to the editors and author for this piece.
Teresa Scully

I respectfully disagree with Teresa Collett. If my daughter had been raped as a child and impregnated, there is no way I would have denied her the opportunity to have an abortion. Maybe I am a poor Catholic, but I cannot imagine any loving parent forcing a 10-year-old girl to carry a pregnancy to term. In addition to the trauma of the rape, continued pregnancy at this age is a definite risk to her life and health.
Glenn Barnette

The worst thing we can do to a victim of rape is to reinforce their victimhood.

Having been sexually victimized and working as a psychotherapist with others who have been sexually victimized, I cannot imagine counseling a sexual assault victim to seek or to not seek having an abortion. The most important therapeutic goal when working with individuals in the aftermath of being sexually violated is to assist them in regaining a sense of control over their lives, as this sense of control was violently taken from them. The individual should be advised of all their options, and they should be offered support without regard to whatever choice they might make.
Alton Angus

This article came to me at a very opportune moment. As a cradle Catholic Christian, I have [attended the March for Life] in Washington on two occasions, most recently last year, preceding and praying for the decision to overturn Roe v. Wade. Yet somehow I recently began to doubt whether outlawing abortion could have a good result, especially in the case of rape or incest. Teresa Collett demonstrates the deep understanding needed to overcome the scourge that leads the culture of death. The worst thing we can do to a victim of rape is to reinforce their victimhood. Supporting them with love and encouragement so that they can overcome the evil inflicted upon them with good works would not only sustain the life of the innocent being that is growing in the womb, but empower them with the knowledge and truth that good will triumph over evil.
Patricia Gaffney