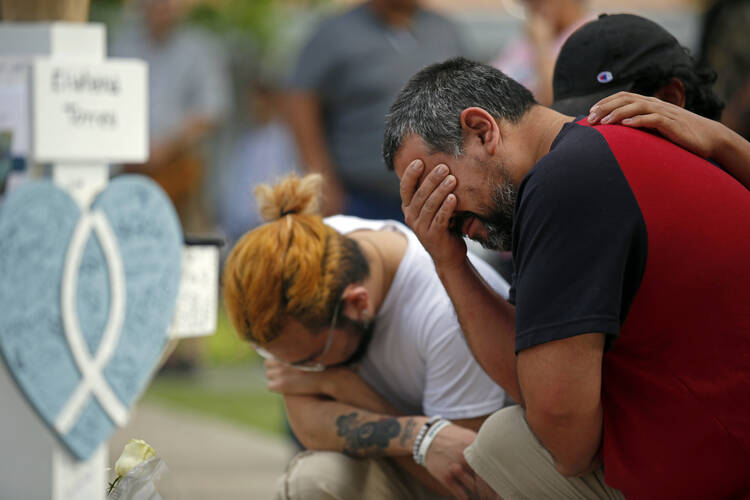 Vincent Salazar, right, father of Layla Salazar, weeps while kneeling in front of a cross with his daughter's name at a memorial site for the victims killed in this week's elementary school shooting in Uvalde, Texas, Friday, May 27, 2022. (AP Photo/Dario Lopez-Mills)

This week, an 18-year-old in Uvalde, Tex., killed 19 children and two teachers at Robb Elementary School. The massacre came less than two weeks after a white supremacist killed 10 people at a supermarket in a majority-Black neighborhood of Buffalo, N.Y.

We’ve been here before. This happens all the time in America. And it feels like we have the same reactions, the same conversations, read the same tweets.

Which is why instead of a normal show this week, we’re revisiting a conversation from 2018 about gun control. In the aftermath of a shooting that killed 17 people at Marjory Stoneman Douglas High School in Parkland, Fla., we brought on Patrick Blanchfield, who writes about gun violence in the United States. We discussed what gets missed in our gun control conversations, the familiar debate over “thoughts and prayers” and how violence in American schools and on our streets is connected to American violence abroad.

Catholic leaders react to Texas school massacre: ‘Don’t tell me that guns aren’t the problem.’
Cardinal Cupich: The Second Amendment did not come down from Sinai
How the Catholic Church in Uvalde is helping a devastated community grieve and heal
Sad, tired and angry: A prayer in the face of gun violence