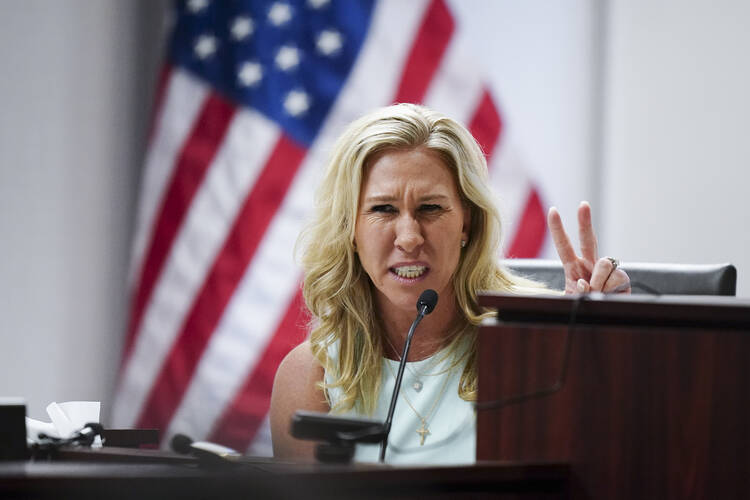 Marjorie Taylor Greene, the controversial Republican U.S. Representative from Georgia, said in a statement released on April 27 that she believes Catholic bishops are “satanic” and accused them of “destroying our nation” through their support of migrants.

The more than 700-word statement takes aim at Catholic bishops and Bill Donohue, the head of the Catholic League for Religious and Civil Rights. Mr. Donohue took issue with an April 25 interview Ms. Greene gave to Church Militant, a fringe media organization that has been instructed by its local bishop not to use “Catholic” in its name and frequently attacks Pope Francis, supports right-wing political causes and traffics in misinformation. In that interview, Ms. Greene said that Satan was “controlling” the Catholic Church in the United States.

In response, Mr. Donohue released a statement on April 27 demanding an apology on behalf of Catholics and calling Ms. Greene “a loose cannon.”

Marjorie Taylor Greene said in a statement that she believes Catholic bishops are “satanic” and accused them of “destroying our nation” through their support of migrants.

Later that day, Ms. Greene released her own statement, doubling down on her Satan comments, attacking Mr. Donohue and stating that she left the Catholic Church because of the clergy sexual abuse scandal.

“I stopped attending Catholic Mass when I became a mother, because I realized that I could not trust the Church leadership to protect my children from pedophiles, and that they harbored monsters even in their own ranks,” Ms. Greene said.

“Just so we’re clear, bishops, when I said ‘controlled by Satan,’ I wasn’t talking about the Catholic Church,” she continued. “I was talking about you.”

At least one lawmaker has called out Ms. Greene for her comments. Rep. Ted Lieu, a Democrat from California, said in a speech on the House floor Thursday that the comments were “bigoted” and called on Republican leaders to condemn them. Olivia Troye, a former national security advisor to former Vice President Mike Pence, called Ms. Greene’s comments “repulsive” in a tweet, saying they could “lead to threats” against Catholics.

“Just so we’re clear, bishops, when I said ‘controlled by Satan,’ I wasn’t talking about the Catholic Church,” Ms. Greene. “I was talking about you.”

The controversy involves three individuals—Ms. Greene, Mr. Donohue and the head of Church Militant, Michael Voris—who each have a history of making over-the-top comments about current events and culture war issues as a way to call attention to their causes.

“This isn’t about Catholicism. It’s not about Christianity. It’s just about each of these players trying to generate more income and more attention,” David Gibson, head of the Center on Religion and Culture at Fordham University, told America. “The Catholic League, Church Militant and Marjorie Taylor Greene, they’re all on the right, but they each have their own agendas, they each have their own platforms and profiles they want to raise. They need money. This is all about promotion more than it is about any genuine substance or grievance.”

Last year, Ms. Greene’s colleagues voted to remove her from congressional committees, citing her belief that some school shootings were hoaxes and that the Sept. 11 attacks were staged and her sharing of videos with anti-Semitic content. She also supports the falsehood that former President Trump won the 2020 election.

“This isn’t about Catholicism. It’s not about Christianity. It’s just about each of these players trying to generate more income and more attention, David Gibson told America.

In her April 27 statement, Ms. Greene accused bishops of trying to destroy the United States through their support of more generous immigration policies. Like other conservatives who have made similar accusations, Ms. Greene suggested that Catholic organizations profit from government contracts to provide care for migrants.

“The bishops are also busy destroying our nation using taxpayer money to advocate for the illegal invasion across our borders. They dare to dress up Democrat vandalism and lawlessness as somehow ‘religious,’ which perhaps explains their distaste for me,” she said. “What more can we expect from criminals and abusers living unaccountable lives of luxury funded by the rest of us, draped in fine linens while choirboys are raped.”

The Catholic League was founded in 1973, and Mr. Donohue has headed the organization since 1993. Just a few years into his leadership, some church observers noted that Mr. Donohue had transformed the organization into a politically conservative group willing to engage in the culture wars and even take on other Catholics. Mr. Gibson said that the Catholic League’s actual influence among the U.S. hierarchy is unclear. Using “Catholic” in its name causes confusion, he added.

In her April 27 statement, Ms. Greene accused bishops of trying to destroy the United States through their support of more generous immigration policies.

“Marjorie Taylor Greene’s role in the Republican Party is akin to Bill Donohue’s role in the Catholic Church,” he said. “They are both outliers in one sense, but they are both closely identified with their respective organizations. And that's a problem.”

[Related: Marjorie Taylor Greene showed that the most brutal anti-Catholicism can come from Catholics]

In some areas, Church Militant and the Catholic League seem to share common views. Both groups, for example, have blamed homosexuality in the priesthood for the abuse crisis, in spite of studies and expert opinions that have discounted that theory. But when it comes to their thoughts on the U.S. hierarchy, they diverge sharply. While the Catholic League is independent of the institutional church, Mr. Donohue regularly issues press releases defending church leaders against perceived slights in the media and has been repeatedly interviewed by New York’s Cardinal Timothy Dolan.

In a video segment about the clash posted on Church Militant’s website on April 27, he described bishops as “perverts in miters” and said the U.S. hierarchy is an “international gay crime syndicate.” (Mr. Voris said in 2016 he previously had sexual relationships with other men.)

In a video segment about the clash posted on Church Militant’s website, he described bishops as “perverts in miters” and said the U.S. hierarchy is an “international gay crime syndicate.”

“She seems to have her finger on the pulse of the conditions of the church right now,” he said.

(An inquiry to Ms. Greene’s office asking if Church Militant helped craft her statement was not immediately answered. The U.S. Conference of Catholic Bishops also did not respond to a request for comment.)

“I myself, baptized and married in the Catholic Church, left because I would not submit the spiritual and physical livelihood of my children to these monsters,” Ms. Greene said. “Bill Donohue, by contrast, makes a million dollars a year, partly from sending out emails to defend corrupt bishops. He has done nothing in his long career to reform the appalling state of the clergy.”

On Thursday, Mr. Donohue responded, posting on his website a letter he sent to congressional leaders asking them to censure Ms. Greene.

“The time has come for her to be either reprimanded or censured. Her irresponsible behavior has already caused her to be removed from committee assignments. Accordingly, her burst of anti-Catholicism now demands stronger sanctions against her,” he wrote.