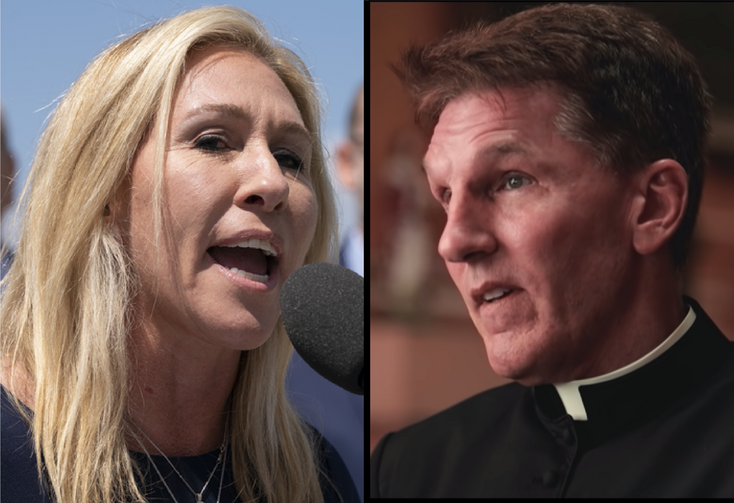 After four years of Trumpism, it is difficult to imagine our civic discourse degrading further. But recently we saw two more reminders of a pervasive disregard for truth that signals a deeper spiritual malaise.

On May 25, Marjorie Taylor Greene, a Republican congresswoman from Georgia, tweeted that employers who require vaccinations were “just like the Nazi’s [who] forced Jewish people to wear a gold star.” With this absurd comparison, Ms. Greene threw herself zestfully into the recrimination that has become an American pastime. In further tweets, she indicted the Democratic Party for “disgusting antisemitism…division, hate, critical race theory (pure racism), discrimination, totalitarianism, socialism, globalism, gender destruction, BDS, defunding our police, and ANTIFA / BLM terrorists.” Her string of accusations attempts to encompass every known evil.

Congresswoman Greene and Father Altman not only portray their opponents as evil or demonic. They blame them for every imaginable form of evil.

The same week, the Rev. James Altman was asked to resign as pastor of his parish by the bishop of La Crosse, Wis., after teaching that Covid-19 vaccines are dangerous and must be refused by Catholics. In March, he preached that public health officials like Dr. Anthony Fauci were “godless vermin” who instituted “Nazi-esque controls,” adding that the “hottest” levels of hell were reserved for “those shepherds who were complicit in the godless restrictions.” Besides condemning bishops to hell, Father Altman also condemns any Catholics who support Democrats, for the supposed sins of fighting climate change, supporting the Deferred Action for Childhood Arrivals program and opposing “white privilege.”

Congresswoman Greene and Father Altman not only portray their opponents as evil or demonic. They blame them for every imaginable form of evil. They say all that is wrong with the world can be traced to a single source, and if just one social faction were removed from public life (or successfully damned), all social ills would find their resolution.

Such rhetoric is ignorant, unhinged and dangerous. In the last century, similar rhetoric was used to justify social ostracism, legal disenfranchisement and even genocide. We are rightly alarmed by such vilification. But we might also reflect whether the form, if not the content, of their reasoning is familiar. When we participate vigorously in political life, the arrow of accusation can tend to make all of one’s opponents begin to look the same. People of many ideological stripes might come to believe that they are only one election, one Supreme Court justice, one corrupt president away from all the problems of the country being solved.

How many Americans have spent the last few intense years cultivating an inner voice, loud and on occasion detached from reality, that insists that their friends bear no blame but their enemies the full measure?

There is no QAnon on the political left. But no matter where we find ourselves on the political spectrum, we can probably recognize this tendency, even in less extreme ways. Even the urge to seek total purity on social media by penalizing someone who made foolish remarks years ago assumes that evils arise only outside my group and can be easily remedied by purging the offender from my circles.

How many Americans have spent the last few intense years cultivating an inner voice, loud and on occasion detached from reality, that insists that their friends bear no blame but their enemies the full measure?

An astounding amount of public discourse today has become an exercise in what might be termed “political theodicy.” Theodicy is a venerable theological exercise that attempts to maintain the absolute goodness of God in light of the world’s various evils. Theological theodicy locates the source of evil somewhere else—in nature, the soul, fate—in order to vindicate God as entirely good. And because God is infinitely and completely good, such theodicy can sustain and deepen faith. Political theodicy borrows this rationale but misuses it in the service of something other than God. It locates all of the world’s evils outside one’s own party, movement or leader by permanently attributing them to one’s opponents—a political if not infernal damnation.

Understood in this way, political theodicy is not something we wittingly practice. It is a sleight of hand, a trick of self-deception, a parallax of self-regard. No one is fully immune to its power. It generates the illusion that we as individuals in our preferred political communities are largely innocent of societal evils. But when group affiliation comes before truth, we cannot confront our own falsehoods, and those falsehoods become vehicles for demonstrating loyalty and commitment. In this perverse solidarity, the bigger the lie, the better. When social life is governed exclusively by individual desires, the Big Lie thrives.

Political theodicy locates all of the world’s evils outside one’s own party, movement or leader by permanently attributing them to one’s opponents—a political if not infernal damnation.

As early as 2014, a landmark political survey by Pew Research Center found that Americans were increasingly divided by party identification. This “rising tide of mutual antipathy” created a “tendency on the left and the right to associate primarily with like-minded people, to the point of actively avoiding” those of opposing positions. This division was accompanied by a “deep-seated dislike, bordering on a sense of alarm” that colored everything from where to live, whom to marry or whom to befriend.

If political theodicy is a trick we play on ourselves, is there a way out? How can we devote energies to the political sphere, and enter coalitions with sincere and profound differences, without seeking to heap every evil on the back of political opponents? How can we free our sense of truth from the tyranny of individual desires?

We can learn to cultivate the spiritual practice of accusation of self. All Americans could stand to spend less time reflecting on the limitations of their enemies, and instead ponder when and how they themselves have failed or done wrong as individuals and as movements. Those unable to complete this task of self-examination should ask themselves why. Has ideology become a closed circle? Is their own political bloc always, a priori and by definition right?

Self-accusation was first advocated by ancient Christian monks warring against the demon of pride, going back to the Desert Fathers in Egypt. Dorotheos of Gaza summarized their teachings: “We remain all the time against one another, grinding one another down. Because each considers himself right and excuses himself…. Ought we not rather to examine ourselves about the Commandments and blame ourselves for not keeping them?”

When a neighbor offends us, writes Dorotheos, we chase after the offense like dogs to a stick. “We run after our neighbor crying, ‘Why did you say this to me? Why did you do this to me?’” But instead, we should heed the counsel of Abba Poemen. “When asked, ‘What do you find most important in this way of life, Father?’ He replied, ‘In everything to blame oneself.’”

Or as Dostoevsky wrote, in an unforgettable speech in The Brothers Karamazov: “There is only one salvation for you: take yourself up, and make yourself responsible for all the sins of men. For indeed it is so, my friend, and the moment you make yourself sincerely responsible for everything and everyone, you will see at once that it is really so, that it is you who are guilty on behalf of all and for all.”

Even as we try to help the Christian far right break free of its spiraling descent into calumniation and paranoia, we all need to examine similar temptations in ourselves. Making ourselves responsible for our tendency to locate political evil anywhere other than our own side will help our neighbors break free as well. 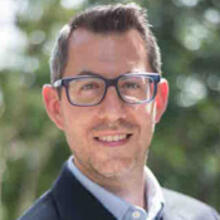 David Albertson is an associate professor of religion at the University of Southern California and the author of “Mathematical Theologies: Nicholas of Cusa and the Legacy of Thierry of Chartres.” He is a senior fellow and the executive director at the Nova Forum for Catholic Thought. 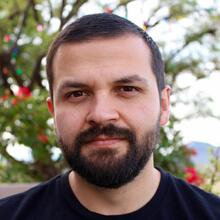 Jason Blakely is an associate professor of political science at Pepperdine University and the author most recently of “We Built Reality: How Social Science Infiltrated Culture, Politics, and Power.” He is a senior fellow at the Nova Forum for Catholic Thought.

@JasonWBlakely
Show Comments ()
Join the conversation: Login or create an account
Before you can comment, you need to update your profile to include your first and last name, as required in our comments policy. Then reload this page and you'll be set up for commenting. Update your profile