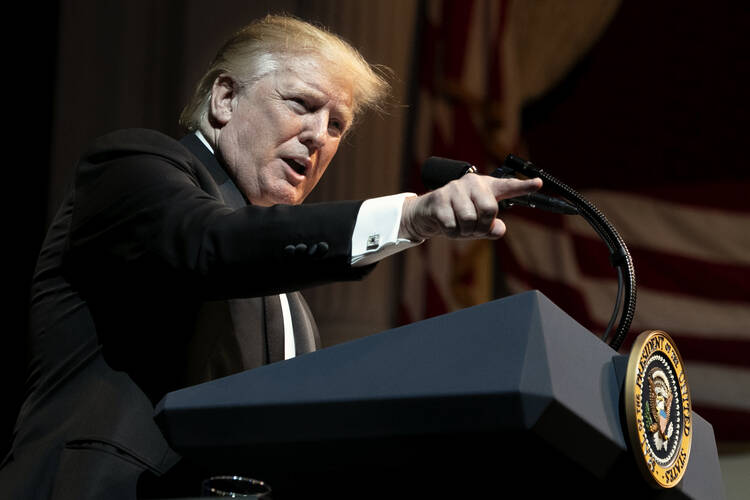 President Donald Trump speaks at the Ford’s Theatre Annual Gala, on June 2, in Washington. Mr. Trump’s approval ratings among U.S. Catholics closely mirror those among all U.S. voters—but there are major differences between white and Hispanic Catholics.(AP Photo/Jacquelyn Martin)

The “Catholic vote” is often described as a bellwether in U.S. politics, falling between left and right extremes and closely mirroring overall public opinion. There is much truth to this characterization, but there is also danger in oversimplification. Referring to the Catholic vote as a bloc also erases some persistent differences between those who attend Mass weekly and occasional churchgoers, and between Hispanic and non-Hispanic Catholics.

There is conflicting evidence over whether a presidential candidate “must” win the Catholic vote to get to the White House; in close elections, it can be impossible to determine for sure who won more Catholic votes.

In its analysis of the 2016 election, the nonpartisan group American National Election Studies found that the overall Catholic vote almost exactly matched the national population in giving the Democratic nominee, Hillary Clinton, a three-point lead in the popular vote. But exit polls had earlier suggested that Republican Donald Trump had won the Catholic vote by either seven points or four points.

Because each poll, and each pollster, has its idiosyncrasies (different sample sizes and margins of error, different ways of asking for religious affiliation, etc.), survey results cannot always be easily compared with each other. A poll with strikingly different results from one taken three months earlier may not indicate a trend at all, but rather different polling methodologies.

Below are summaries of recent polls that compare Catholic voters with the overall U.S. population, and explanations of why they may or may not be important.

May 21, 2019, Quinnipiac poll: Catholics line up almost precisely with the overall electorate, 55 percent “definitely” will not vote to re-elect President Trump.

A Quinnipiac University poll of 1,078 U.S. voters found that a solid majority of 54 percent will “definitely not” vote to re-elect Donald Trump as president next year, close to the 52 percent who said the same in a Quinnipiac poll released on April 30. There was no significant difference between Catholic voters (55 percent saying “definitely not,” almost the same percentage who voted against him in 2016) and the overall poll sample. Among voters who had no religious affiliation, 70 percent said they would definitely not vote for Mr. Trump, but only 24 percent of white evangelical Protestants said the same.

The poll did not distinguish between white and Hispanic Catholics; however, 64 percent of Hispanics overall said “definitely not,” compared with 49 percent of white non-Hispanics.

On May 21, President Trump was at an overall disapproval rating of 53.9 percent in RealClearPolitics’s average of recent polls.

America’s Michael O’Loughlin reported on the results in greater detail:

When broken down by white and non-white Catholics, the numbers tell a different story.

Support for Mr. Trump among white Catholics has generally hovered around 50 percent since the early days of his presidency, according to Pew, with a high of 55 percent in April 2017 and again in May 2018 and a low of 36 percent in December 2017. Greg Smith, associate director of research at Pew Research Center, told America that support for Mr. Trump from white Catholics has been “pretty consistently within that band.”

The January survey found that 26 percent of non-white Catholics approve of the president’s job performance, up from 13 percent in February 2017.

In recent months, the president has boasted that his support from Hispanic Americans has been growing, crediting his continued efforts to build a wall along the U.S.-Mexico border. Experts have cast doubt on that claim, but they say that his support continues to hover around the 29 percent of the Hispanic vote that Mr. Trump won in the 2016 election.

The Quinnipiac poll released on May 21 (see above) did not break out data for white and Hispanic Catholics, but it found that Mr. Trump had an approval rating of 28 percent among Hispanic voters, very close to the 26 percent support among non-white Catholics that Pew reported.

On March 18, the day the Pew study was released, President Trump was at an overall approval rating of 42.6 percent in RealClearPolitics’s average of recent polls.

Partisanship and views on major issues

Jan. 24, 2019, Pew Research Center poll: Catholics are generally as partisan as the rest of U.S. voters.

A Pew Research Center survey tested the idea that fidelity to church teaching would make U.S. Catholics less loyal to the Democratic and Republican parties—and found little evidence for the idea. According to the poll, conducted last year, Catholic Democrats were somewhat more pro-life than other party members: only 64 percent of Catholic Democrats agreed that abortion should be legal in “all or most cases,” compared with 76 percent of all Democrats. But only 55 percent of Catholic Republicans agreed that abortion should be illegal in all or most cases, exactly the same as the 55 percent among all Republicans who took that position.

Is identification as a Catholic a meaningful categorization? I used to know what it meant but don't think it means anything homogeneous anymore and thus, is not meaningful.

The key question for the White Catholic vote us how abortion was handled. Clinton played to her base on a partial birth abortion question (how did Trump and the bishops know she would. Could it have been....Putin?). Obama used surrogates to put out the word to Catholic voters that the pro-life movement is and was a GOP scam. Guess who made sure his old boss, Alice Germond, knew to do that? You're welcome.

There is a thing that I remember from a market research case study done many years ago. When the subject of interest was whether polled individuals would be buyers of a particular product with particular features at a given price point, they would give their answers, but when polled after the product had come to market, there was a low correlation of their purchase behavior with their expressed intentions. Improved reliability was sorely needed.

The survey design and execution challenge involved not merely reflecting faithfully the demographic characteristics of the target market as a whole in the identified sample, a quality called representationalness, and insuring an adequate number of poll responses, or sample size. In addition, for this kind of “intentions” polling, question design was of particular importance.

The obvious parallel in political polling involves improving the correlation of pre-election intentions with election day behavior. I assume that in the many years since this sample survey design challenge was addressed, behavioral researchers have acquired the survey question design techniques to meet the challenge. Whether they are always employed is of obvious interest when reading out survey results.

It would be good to know the relative size of each population group polled. What percentage of the electorate is Catholic, what percentage is fundamentalist Protestant, and the same for Democrats, Republicans, evangelicals, Hispanics. Without such information, the polling statistics leave one guessing. Perhaps they represent broad trends, but they don't give us a clear picture of what is happening. Gallup, for example, reports that Democrats and Republicans are neck and neck in party affiliation, around 30% each. Independents, outdistance both. There is also the question of propensity to vote. Who is more energized to go to the polls? Polling that does not address these questions are at best misleading. Finally is the matter of the electoral college and the weight of various states.

It would be good to know the relative size of each population group polled. What percentage of the electorate is Catholic, what percentage is fundamentalist Protestant, and the same for Democrats, Republicans, evangelicals, Hispanics. Without such information, the polling statistics leave one guessing. Perhaps they represent broad trends, but they don't give us a clear picture of what is happening. Gallup, for example, reports that Democrats and Republicans are neck and neck in party affiliation, around 30% each. Independents, outdistance both. There is also the question of propensity to vote. Who is more energized to go to the polls? Polling that does not address these questions are at best misleading. Finally is the matter of the electoral college and the weight of various states.

Polls show a majority of Catholics are pro-choice. Republican Catholics use abortion as their excuse for voting for Trump, when the real reason is that they agree with his policies of racism, misogyny, and dooming of the poor.

That’s an unfair generalization on all Republican Catholics. Sure, I would say that the March for Life Rallies in Washington have become Republican Campaign Rallies and there is some truth in what you say. But there are many Republican Catholics who are just Single Issue Voters on Abortion which does not make them Racist. I know some of them and they are definitely not Racist.

The real racist in America are the Democrats. So if you vote for them, you are supporting racism. Also the policies of the conservative, liberty and free market capitalism, have done more for the poor in the world than any liberal policy you can point to. Abortion was not the main reason for voting for Trump, but it was one of many.

J Cosgrove--
Please give evidence of your charge that the racists are Democrats.

evidence? No problem. The policies that led to dysfunction in the Black community started with the New Deal’s Aid to Dependent Children. At that time single parent black households was about the same as for whites(4%). After this the rate increased till about 20-25% for blacks in the mid1960's. The Great Society programs then increased it to over 70% amongst blacks (about 85% in households under the poverty line.) These are the result of Democratic Party policies not denounced by any Democrats. That is incredibly cynical racism.

Another factor affecting the black family was the change in immigration policy in 1965. Essentially the new immigration policy let in low skilled Mexican workers who now competed with blacks for the low paying jobs in the economy. Black poverty rates had been falling to this time. But the War on Poverty and the new immigration laws affected black families and black job prospects disproportionately. All are Democratic Party policies but the dysfunctional effects on Blacks are never acknowledged

Mr. Cosgrove, your comments often point out the difference in views between yourself and those expressed in the article and some comments.

Would you perhaps consider a role to be the difference? Foster parent/grandparent for a child from Haiti for example. Take them to the store, on a trip, to the water park or a walk around the neighborhood. Let us know your thoughts.

Would you perhaps consider a role to be the difference? Foster parent/grandparent for a child from Haiti for example. Take them to the store, on a trip, to the water park or a walk around the neighborhood.

Is there a program that does that? I would have no problem doing most of that if there was an opportunity, though foster parent is out. However, we are in the process of moving to New Hampshire about an hour from Boston. The parish we will belong to sponsors a group in Haiti.