Is Pope Francis a socialist?

Is Pope Francis a socialist? 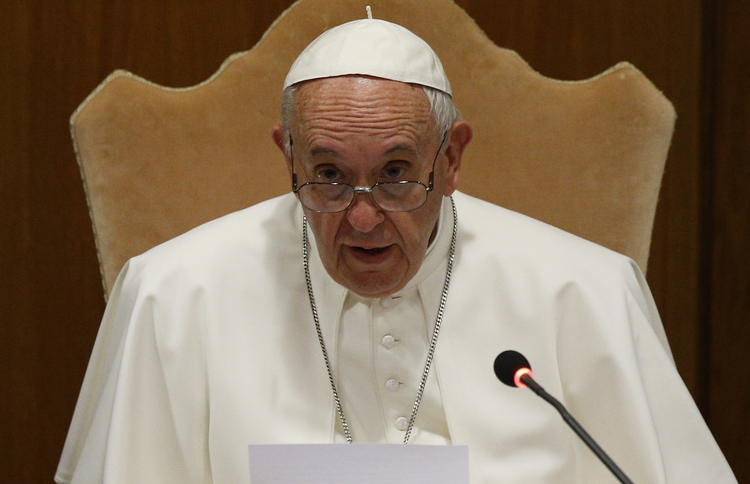 Pope Francis speaks at the opening of the annual spring meeting of the Italian bishops' conference at the Vatican May 20, 2019. (CNS photo/Paul Haring)

This week on “Inside the Vatican,” Gerry and I unpack a recent confrontation between the Italian bishops and the pope, which came after the bishops failed to implement the pope’s 2015 annulment reforms. We talk about what those reforms were and what this tells us about the way the Vatican is able to enforce change.

Then, we talk economics. Whenever Pope Francis discusses the economy, it sets off cries that the pope is a socialist or a communist. So this week, we ask: Is the pope a socialist? What is his vision for the economy?

Finally, we dig into the pope’s comments to journalists about fake news, freedom of the press and why he thinks women make good reporters.

Congratulations to Jeff Johnson, the winner of our raffle of Gerry’s book, The Election of Pope Francis: An Inside Account of the Conclave that Changed History.

we ask: Is the pope a socialist? What is his vision for the economy?

I assume the Pope has good intentions. But he is not knowledgeable on economic matters. He also does not seem to be knowledgeable on how the press operates around the globe. He should avoid these areas of discussion. That is not his job.

Catholic interference in social and economic policies have a track record of creating dysfunctional societies. Just look at Latin America. The modern economic world flowed from two Protestant countries (England and Holland) that promoted religious freedom. Why, because religious freedom led to other freedoms. The Catholic Church fought it. The Church excels at individual morality not economic or social policy.

Dysfunction in Latin America is mostly about reaction to American foreign and economic policy. That banana and coffee you had for breakfast comes at a huge human cost.

Morality is not simply an individual matter. It is a social matter. So, you cannot confine morality to individuals but you need to look at social/national policies thru the moral lens and the lens of the Gospel.

I'm not sure whether Pope Francis is a socialist, but I do know that Jesus was a socialist.

Jesus was definitely not a socialist. Best example, the parable of the Talents.

Jesus sure wan’t a capitalist!

No, because free market capitalism didn’t develop till the 17th century and then in only a small part of the world. But He sure did approve of investment banking an aspect of modern capitalism. Read the parable of the Talents.

I agree. Just listen to what Jesus told the young man - "If you want to be perfect, go, sell your possessions and give to the poor, and you will have treasure in heaven. Then come, follow me." (Matthew 19:21)

It sounds really socialist to me.

Again a misunderstanding of socialism. There was almost no industry outside of agriculture during the time of Jesus and it seemed most agriculture was privately owned. The parable of the rich man has nothing to do with socialism but with the religious life and the temptations of wealth. Being in favor of charity is not the same as being a socialist. Socialism actually oppresses people just the opposite of love for one’s nejghbor. Jesus wasn’t for that. Free market capitalism actually eliminates poverty.

As Will Rogers famously said, "It isn't what we don't know that gives us trouble, it's what we know that ain't so."

Many countries adopt aspects of both a market economy and socialism. These countries (Canada, France, Germany etc) aren't purely socialist countries. Employing some aspects of socialism leads to a greater number of citizens enjoying a decent quality of life. A slavish loyalty to a market economy tends to lead to greater disparities in the distribution of wealth. I'm glad that the pope speaks up on behalf of the poor and marginalized rather than staying in the box of "individual morality" as some would prefer.

Canada, France and Germany are free market capitalist countries. You are confusing social programs with socialism. Free market capitalism has been eliminating the poor from the world for the last 200 years. Read Factfulness: Ten Reasons We're Wrong About the World--and Why Things Are Better Than You Think by Hans Rosling https://amzn.to/2SM5vTb . Nothing wrong with a social safety net or individual charity helping out.

wrong, seriously wrong ! Canada and Europe and the UK are definitely not free market capitalist economies. After WWII, most European countries adopted a form of socialist economy for redistributing wealth by the govt. in order to level the economic playing field. UK for instance started the NHS to guarantee access to health for everyone, while the Labour govt. nationalised some industries (like railroads) in an attempt to control the economics. What surprises me most of all is that a magazine like America would even publish an article with such a question--it smacks of McCarthyism as if socialism was a dirty word. Seems like Mr Cosgrove is not even aware that countries like France, Italy and UK allow Communist candidates to run for election. Different countries, different outlooks.

He, like every Pope since Leo XIII, is a social democrat. Socialism is direct control of enterprise by the workers with no intermediaries.

No, I suggest you read up on socialism. You obviously don't understand it. It is control of the means of production by the state. It can take many names and forms. For example, fascism was a form of socialism. Mussolini realized that it would be much easier to have industry under state control then to do it directly. Prior to seizing control in Italy Mussolini was one of the heads of Italian socialism. He died trying to rewrite the Communist Manifesto.

Pope Francis comes across as a genuine follower of Jesus of Nazareth. Was Jesus a socialist?

Not really. Jesus exhorted his followers to give the cloak off of their backs to help those in need. But this was strictly a voluntary request. "Blessed are...." Francis believes in pure socialism as much less of a way of the heart and much more as a system of governance. Note his admiration of the avowed anarchist Dorothy Day. Note his allegiance with Cardinal Reinhard Marx who is an avowed Marxist. One might note that the Kingdom was not of this world. The kingdom of Francis is solely of this world. Christ, in typical liberation theological thought, is a means to control of people through power and governance. It does not ring true to Jesus except in using Jesus as a political figurehead and in this exists the ultimate blasphemy. Recall Francis accepting and retaining the gift of a Jesus nailed to a hammer and sickle. How much more political can one get than in this act! Francis is a very savvy politician who does come across well as he is a learned scholar of, and a child of, modern times, certainly not as genuine, but as one who knows how to effectively walk the halls of power and world opinion. Francis is a glossy handout of the church.

As with Christianity, socialism is a good idea that's never been tried.

It’s been tried hundreds of times and failed all but once. In that particular situation they abandoned it after one generation. The example was Israel. Israel was originally supported by the Soviet Union. Want to know why Israel is a pariah today with a lot of the world. This is the reason. It is a free market capitalism power house.