What does it mean to be holy? For Pope Francis, it’s personal, but not done alone. 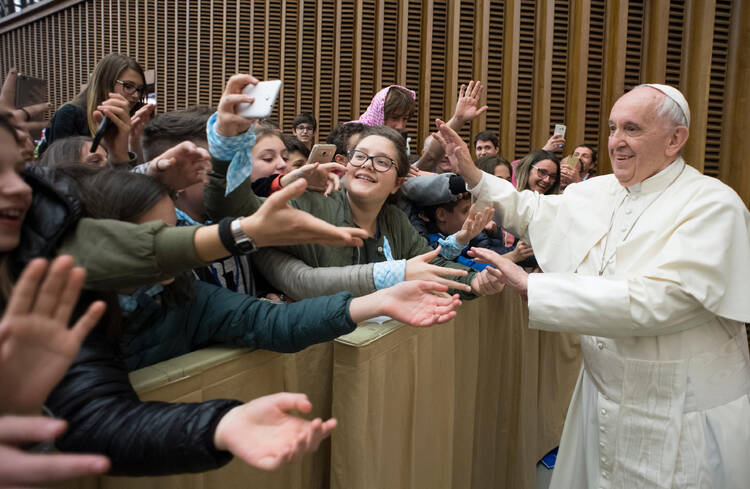 Pope Francis greets youths during an audience with young people from the northern Italian Diocese of Brescia in Paul VI hall at the Vatican April 7. (CNS photo/Vatican Media)

There is a deep simplicity at the heart of Pope Francis’ new exhortation: We are called to become more fully who we are, the people of God. The call to holiness is at once personal and communal—pushing us to actively build the kingdom of God.

“Gaudete et Exsultate” is at once theologically dense and pastorally accessible. Its modesty lies in the text’s attempt to embody the humility it proclaims; it does not propose a single path to holiness or one vision of saintly life. Rather, building upon his writing in “Evangelii Gaudium,” “Laudato Si’” and “Amoris Laetitia,” Pope Francis seeks to confirm, challenge and empower all the baptized to join the “great cloud of witnesses” that “includes our own mothers, grandmothers and loved ones” (No. 3).

The call to holiness is at once personal and communal—pushing us to actively build the kingdom of God.

The intimacy of its message is striking. “The important thing,” Pope Francis explains, “is that each believer discern his or her own path, that they bring out the very best of themselves, the most personal gifts God has placed in their hearts” (11). Who is God calling you to be? How is God calling you to holiness? These are intimate and personal questions.

What does it mean to discern one’s own path? How do we stop trying to live up to other people’s or society’s idea of holiness or success? In today’s world, the image of “living one’s truth” is a popular quip meant to capture a deep desire for authenticity. Within a secular culture, this can amount to a form of relativism. But we should not dismiss it so quickly.

My college students are rarely relativists seeking to simply create their own truth. Instead, they are seeking authenticity. They recognize a pull inside of them toward a vision of the true and good, and they see right through the fake.

How do we stop trying to live up to other people’s or society’s idea of holiness or success?

This universal call to holiness requires a relationship with God; it is a lifelong discernment process. Francis is clear that in accepting God’s grace, we cooperate with God and are more fully transformed over time.

Critics of “Amoris Laetitia,” Francis’ exhortation on the family, dismiss its call to “form consciences but not replace them.” But a well-formed conscience is what enables us to personally respond to God’s call. Pope Francis’ emphasis on discernment encourages the baptized to live out the personal call to holiness in their daily lives.

We hear the personal call to holiness in the seemingly mundane reality of our everyday lives, and it is in the simple witness of those everyday relationships, of our “next door neighbors,” in which one is confirmed and strengthened on one’s path (No. 7).

“Do you work for a living?” the pope asks. “Be holy by laboring with integrity and skill in the service of your brothers and sisters” (No. 14). Recognizing holiness in the everyday, in the dignity of work, builds upon the entirety of the social teaching tradition.

But if the call to holiness is deeply personal, it is not individual. We are called together.

But if the call to holiness is deeply personal, it is not individual. We are called together. This is the central thrust of salvation history; God enters into relationship with the people.

This is the radical communitarianism and intimacy of Jesus’s prayer in John 17:21 “that they be one as we are one.” It is a call to participate in the unity of the Trinity. Pope Francis reminds that “we are never completely ourselves unless we belong to a people. That is why no one is saved alone, as an isolated individual.

Rather, God draws us to himself, taking into account the complex fabric of interpersonal relationships present in a human community” (No. 6). And he returns to this message toward the end of the document, reiterating that “growth in holiness is a journey in a community, side by side with others” (No. 141).

“Growth in holiness is a journey in a community, side by side with others.”

So many people struggle today with the anxiety and isolation of contemporary culture, exacerbated by the ephemerality and fragility of relationships maintained on social media. The individualism and consumerism that result fuel both rampant loneliness and a throwaway culture.

The clear mission of this papacy is to announce, “no one can be excluded” (“Evangelii Gaudium,” No. 23). In “Gaudete et Exsultate,” Pope Francis reminds us that we are always called to be the people of God together on the path to holiness.

As we seek to live and embody our baptismal call, there are a number of passages in the exhortation that help us remain grounded. First, my relationship with Jesus is lived out through my relationship with my brothers and sisters; it is in the faces of the most vulnerable that we see the face of God reflected back to us (No. 61).

Pope Francis wants you to be holy online. Here’s how.
Michael J. O’Loughlin

Second, those overlooked or excluded by society are often where we see the working of the Holy Spirit. Here also the exhortation’s highlighting the example of the everyday lives of women as “an essential means of reflecting God’s holiness in this world” is important (No. 12).

Often against both social and ecclesial powers, Pope Francis writes, “the Holy Spirit raised up saints whose attractiveness produced new spiritual vigor and important reforms in the Church. We can mention Saint Hildegard of Bingen, Saint Bridget, Saint Catherine of Siena, Saint Teresa of Avila and Saint Thérèse of Lisieux. But I think too of all those unknown or forgotten women who, each in her own way, sustained and transformed families and communities by the power of their witness.” (12).

Holiness is impossible apart from the embrace of the dignity of every human person, as “Our Lord made it very clear that holiness cannot be understood or lived apart from these demands, for mercy is ‘the beating heart of the Gospel’” (97).

Ultimately, it is the Beatitudes that light the path. Just as “Amoris Laetitia” focused on a sustained meditation of 1 Corinthians, this exhortation delves into the complexity and practicality of the Beatitudes, inviting us, personally and communally, to pray and act.