Some people see God’s grandeur when they look at space. I just see a blurry photo. 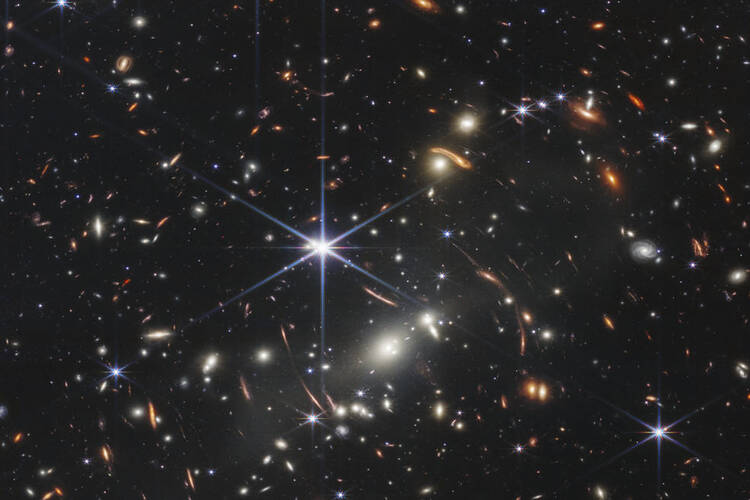 For the last few days, my social media feeds have been filled with reposts of the first official photo from the James Webb Space Telescope. The Atlantic called it “dazzling.” The Economist opined, “Astronomy will never be the same again.” These images, President Joe Biden said during the unveiling on Monday, “remind the American people, especially our children, that there’s nothing beyond our capacity.”

I usually love a good space story. But the more accolades I read, the more I wondered if there was some other photo I hadn’t seen—because the one I kept seeing looked, well, like a blurry photo of stars. I mean, it might be cool in a “this is going to be the background art for my ’70s psychedelic disco album” kind of way. But a reminder of our capacity as a nation? Really?

Part of my problem, I think, is that two weeks ago I started watching “For All Mankind,” Apple TV Plus’s alternate history of the space race in which the Russians arrive on the moon first, creating a sustained level of competition and progress. By the 1970s, Russia and the United States both have tiny moon bases, mostly out of fear that otherwise their opponent will effectively control the moon and space. By the 1980s, they have real lunar operations, with mining and nuclear power and regular trips back and forth from Earth. By the 1990s, they are headed for Mars.

I usually love a good space story. But the more accolades I read, the more I wondered if there was some other photo I hadn’t seen—because the one I kept seeing looked, well, like a blurry photo of stars.

Obviously, it is all fiction. Still, it’s hard not to see Americans and Russians zooming above the moon in souped-up space shuttles and not feel a deep pinch of regret at where our space program currently stands. There was a time when we dreamed of going to the stars and took the first steps toward making that a reality. Now our political leaders tell us that it’s a big achievement just to look at them.

When I pitched writing about this at our staff meeting, I immediately received some much more positive responses to the photo. “Let people be excited about things,” associate editor Colleen Dulle wrote. It is a piece of advice that I should always have in front of me when I’m writing about culture.

Our next editor in chief, Sam Sawyer, S.J., highlighted the amount of ingenuity and teamwork involved in the success of the telescope in the first place (a wonderful thing for a future editor in chief to be thinking about).

He also pointed out that what The Atlantic described as “a great choice for a computer background” (this is not the compliment you think it is, Atlantic staff) is actually not a blurry photo of stars that a kid might have taken by spinning in a circle with his or her mom’s camera at night; it’s a photo of distant galaxies. Not only that, the galaxies in the photo constitute one grain of sand’s worth of our view of the nighttime sky. In other words: You know how when you’re able to see the night sky without any ambient light the number of stars is absolutely overwhelming? Well, in reality, each one of those points of light represents thousands of galaxies, and so does every single star-sized bit of blackness.

“Let people be excited about things,” associate editor Colleen Dulle wrote. It is a piece of advice that I should always have in front of me when I’m writing about culture.

Senior editor James T. Keane sent me a beautiful article he wrote some time ago about how our growing awareness of the near-infinite size and age of the universe affects our sense of our place in the universe. One might argue that the bigger the universe gets, the less meaningful we seem within it. But Keane points to theologian William Lynch, S.J., who wrote that in fact the less central we seem, the more important the Incarnation becomes. “At each new discovery of our insignificance, God says ‘nevertheless.’”

With their comments in mind, I went back to the Webb Telescope photo and tried to see it again. And honestly, I still don’t really get it. To me, it looks like the background from an episode of Star Trek, maybe an unseen Christmas episode in which Kirk and the gang get trapped in a swirling snow globe region of space and discover an unusually bright star that leads them to freedom and also a pod of calving space whales, or something.

But there are details that are striking. Like the tiny white spiral to the right of the massive star (or is that a galaxy? A set of galaxies?) or the orange ellipses that dot the upper right quadrant. To imagine that each of those are whole galaxies of their own, worlds upon worlds upon worlds, billions of light years away, is pretty incredible.

Looking at this strange horizon, maybe we also see ourselves, so totally microscopic in the big scheme of things. Yet somehow our insignificance only increases our sense of possibility and wonder.

During my first visit to Australia in 2008, I was assigned to spend a month in a small town in the outback. The outback is in many ways like the universe—massive beyond all understanding, terrifying in its absolute indifference to humanity.

On a day off, I traveled some 60 kilometers outside the city to a national park, which was really just a bit of the outback that had been portioned off to seem less frightening, more manageable. Walking down the park’s main path, past little exhibits on different kinds of plants that all seemed equally ugly and hostile, I finally came to a place where the road ended. But instead of turning around, I wondered what it would be like to just keep going. I even started walking that way at first, my anxiety level rising with each step.

It wasn’t long before I hurried back to the road, safety and, let’s be honest, survival; I am many things, but an outdoorsman is not one of them. But for years after I would think back to that moment, standing before the endlessness.

I am guessing that is what some people feel staring at that photo. Here it is, waiting for us, an eternity of frontiers. And looking at this strange horizon, maybe we also see ourselves, so totally microscopic in the big scheme of things. Yet somehow our insignificance only increases our sense of possibility and wonder.

[Jesuit astronomer on Webb telescope photo: ‘This is God’s creation being revealed to us.’]