Cars kill almost as many Americans as guns. And we can do something about it. 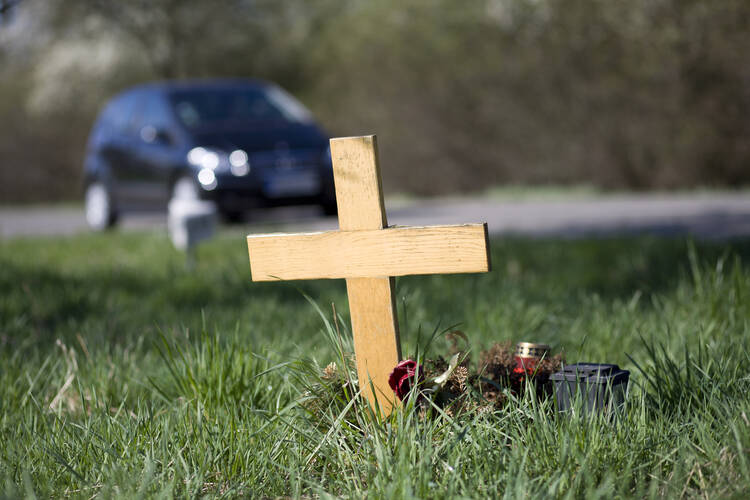 This spring, The Washington Post reported that children are almost twice as likely to be killed by guns as they were a decade ago. The rate of firearm deaths among people under the age of 20 more than doubled from 2011 to 2021—from 3.4 to 6.1 out of every 100,000 individuals. This means that guns now kill more children than cars do, and gun violence has become a major political issue after several mass shootings this year, including the murder of 19 children and two teachers in Uvalde, Texas.

The fact that one problem is getting far worse should not let us off the hook for solving another stubbornly persistent problem. Cars may have dropped out of first place, but the Post reported that the car-related death rate among people under 20 still went up from 2011 to 2021, from 5.4 to 5.7 per 100,000.

The fact that one problem is getting far worse should not let us off the hook for solving the other.

Things have gotten worse during the Covid-19 pandemic, even with fewer people driving to work. The Department of Transportation reported in May that 42,915 Americans died in “motor vehicle traffic crashes last year,” a 10.5 percent increase from 2020. The fatalities included 7,342 pedestrians (an increase of 13 percent); 6,101 motorcyclists; and 985 bicyclists. By comparison, according to preliminary estimates from the Centers for Disease Control and Prevention, gun-related deaths totaled 49,000 last year. (If recent patterns hold true, a little more than half of those were suicides.)

But those are completely different problems, you might think. Car accidents are unavoidable in modern society, and there is only so much we can do to prevent them short of confiscating cars, while gun violence is a uniquely American problem that comes from our refusal to accept common-sense regulation.

Unfortunately, car-related violence is also a uniquely American problem. The traffic fatality rate among all ages in the United States is one of the highest among industrialized nations. The number of car crash deaths per 100,000 people is more than twice as high in the United States as in Australia, Canada and France, and it is more than three times the rates in Great Britain, Italy, Japan and Spain.

One reason for the difference is that street design in the United States prioritizes drivers over pedestrians, and it prioritizes speed over safety. The highest rates of pedestrian deaths are in Sun Belt states where many metro areas were built almost from scratch after the 1950s. As Eve Kessler writes on the website Streetblogs USA, these areas have high-speed roads with “few marked, signalized crosswalks, and many destinations such as stores along them, leading to more deadly interactions between pedestrians and drivers.” Many of these roads also have curved corners at intersections, allowing drivers to take turns at reckless speeds. These pedestrian-hostile roads may be most common in the South, but because “driver-first” engineering has become the norm everywhere, there are dangerous stretches of road even in older cities like New York.

U.S. drivers also have an appetite for bigger and bigger vehicles, even for city driving, that are more likely to kill pedestrians and bicyclists. Canada, for example, has embraced SUVs, but compact and subcompact models are more popular, which may be one reason pedestrian deaths have fallen there while rising in the United States.

Those are major factors in pedestrian deaths, but Canada and other Western nations also work harder to prevent car accidents in general. In 2002, France greatly expanded its use of cameras to levy high fines against speeding, and since then its rate of traffic deaths has fallen far below that of the United States. Canada has been tougher than the United States in punishing motorists for drunk driving (and making the courts more efficient in imposing penalties) and has seen alcohol-related deaths fall significantly.

We can take some sensible steps toward making our uniquely American “car culture” a lot less deadly.

Because speed is the biggest factor in determining whether a car accident turns fatal (a pedestrian has a 10 percent chance of dying when hit by a car going 23 miles per hour and a 75 percent chance if it is going 50 miles per hour), “traffic calming” measures like road bumps and median strips also help. And France is going big for traffic circles (or roundabouts, or rotaries, depending on where you live) that slow down vehicles.

Some local governments in the United States have joined the global Vision Zero program, which collects best practices toward the elimination of traffic fatalities. The tiny but densely populated city of Hoboken, New Jersey, has cut speed limits to 20 miles an hour and extended curbs to give more room to pedestrians rather than cars at intersections; it has now gone four years without a single traffic fatality.

But it is difficult to implement such changes at a wide scale in a nation that prizes fast cars even more than big guns, and in places where the fear of slower traffic is enough to unite neighbors to fight any new housing. The New York Times columnist Ross Douthat recently compared motoring skills to “virtues well suited to citizenship in a sprawling and diverse republic,” and added that driving is “a tonic for anxiety, an easily available antidote to the sense that the world is pure chaos, beyond anyone’s control.” Though Mr. Douthat does not draw a parallel, this kind of empowerment language is similar to many advocates of gun ownership.

Another parallel between cars and guns is that their respective devotees run the gamut from fierce libertarians, against any kind of restriction on size or speed or deadliness, to more practical citizens who think there are ways to reduce thousands of deaths annually without infringing on basic freedoms. While we work toward a consensus on reducing gun violence, we can also take some sensible steps toward making our uniquely American “car culture” a lot less deadly.