Biden’s recognition of the Armenian genocide makes it clear: Turkey will be held accountable for human rights violations 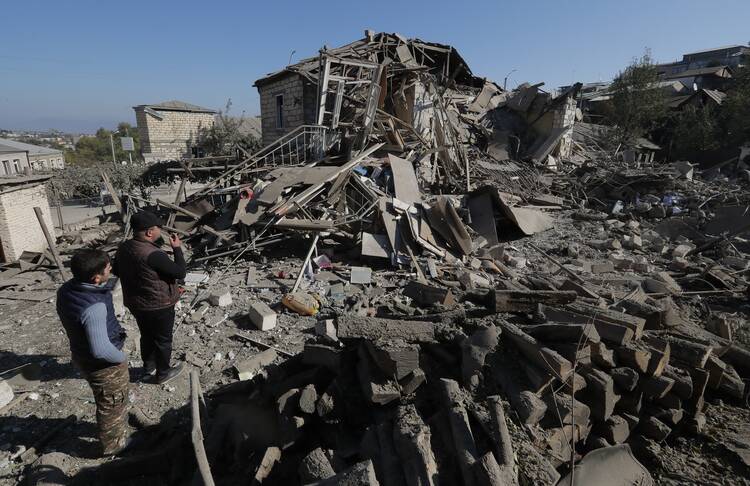 The genocide of Christians in the Middle East continues to this day, as seen in Azerbaijan’s occupation of Nagorno-Karabakh, a disputed region with an Armenian majority. In this photo, men look at the ruins of a house in the city of Stepanakert on Oct. 17, 2020. (CNS photo/Reuters)

Pressure has been mounting on President Biden to take Turkish President Recep Tayyip Erdoğan to task on his war against democracy and human rights in Turkey. The New York Times has also reported that Mr. Biden is expected to declare on Saturday that the Ottoman Empire’s killing of millions of Armenian civilians during World War I was a genocide, an important step in affirming U.S. commitment to human rights.

The human rights advocate Merve Tahiroğlu wrote in February about the threat Turkey poses to American interests due to its shameless disregard for international law. That same month, legislators in both the House and Senate led letters to President Biden expressing similar concerns, reflecting concern over Mr. Erdoğan’s erosion of human rights—including his crackdown on political opposition and his attacks on journalists, activists, and ethnic and religious minorities throughout the country and region at large.

Contemporary Turkey was built on a deeply dark and disturbing foundation that has yet to be acknowledged over a hundred years later.

While this long-overdue reassessment of the U.S. relationship with Turkey is a promising sign in the enforcement and preservation of human rights, we must not forget its historical context.

Contemporary Turkey was built on a deeply dark and disturbing foundation that has yet to be acknowledged over a hundred years later. Over three million Armenians, Greeks, Assyrians, Chaldeans, Syriacs, Arameans and Maronites were killed in the Ottoman Empire’s genocide against its indigenous Christian population.

Congress officially recognized this genocide in 2019, and Mr. Biden promised to do the same during his presidential campaign. He understands that confronting the nightmares of its past is the only way that Turkey’s modern-day abuses can be addressed and genuine democratic reform can take root. He recognizes that the democratic reform so many activists have been championing can only be made possible through the righting of this historical wrong.

It is appropriate to make this declaration on April 24, a date of commemoration and remembrance for Armenians the world over. With the Biden administration’s pledge to put human rights at the forefront of its foreign policy, this recognition of the Armenian genocide not only goes a long way toward righting an historic wrong; it also sends unmistakable message to an increasingly rogue government in Ankara that Washington means business.

Confronting the nightmares of its past is the only way that Turkey’s modern-day abuses can be addressed and genuine democratic reform can take root.

For the last two decades, Mr. Erdoğan has been engaged in systematic backsliding on democracy, the suffocation of civil society and an assault on minority communities throughout the region at large—all while the United States clung to a naïve hope that Turkey could serve as a model democracy and bastion of stability in a volatile region.

To say this was a miscalculation would be an egregious understatement. Emboldened by the silence in response to relentless crackdowns at home, Mr. Erdoğan moved to take advantage of regional instability to press Turkey’s hegemonic ambitions abroad.

In 2019, Turkey invaded Northern Syria, resulting in the ethnic cleansing of Kurds and religious minorities. The Nobel Peace Prize winner Nadia Murad warned in 2020 that “Turkish-backed militias are silently carrying out a campaign of ethnic cleansing against Yazidis in Afrin.” And Amy Austin Holmes of the Council on Foreign Relations reported last fall that Turkey has violated the U.S.-brokered cease-fire in Northeast Syria over 800 times, including 138 violations in Tel Tamer, a region home to survivors of the Ottoman-era Christian genocide.

Soon thereafter—in defiance of international law and the objections of its allies—Turkey intervened in Libya in a bid to assert its supremacy in the Eastern Mediterranean, threatening the sovereignty of Greece and Cyprus, perennial targets of Turkish aggression. At the same time, Ankara began a relentless and unlawful airstrike campaign in Iraq’s Sinjar region—targeting Kurds, as well as Yazidis returning to their homeland following a genocide at the hands of ISIS.

Most recently, Mr. Erdoğan assisted Azerbaijan’s invasion and occupation of the disputed Nagorno-Karabakh region (also known as Artsakh), which resulted in a litany of human rights abuses and war crimes against the region’s indigenous Armenian inhabitants, the displacement of tens of thousands of civilians and the destruction of ancient Christian Armenian heritage—continuing the pattern of cultural erasure undertaken by Turkey in recent decades, including the recent conversion of the Hagia Sophia into a mosque.

And if Ankara’s swath of interventions throughout the region wasn’t evidence enough of its violent expansionism, Mr. Erdoğan’s public praise of Enver Pasha—one of the organizers of the Armenian genocide—during a military parade in Azerbaijan celebrating the Turkish-backed invasion of Artsakh should be. Mr. Erdoğan refuses to come to terms with Turkey’s violent past but instead draws from it to justify its actions today.

For decades, Turkey has been encouraged by the impunity it has been afforded by the international community. And the root of that impunity has been the enforcement of Turkey’s denial of its Christian genocide and what that represents: the willingness of the United States to turn a blind eye to the most egregious human rights abuses for the sake of political expediency and grant foreign dictators a veto over foreign policy.

Turkey’s involvement in Armenia is dangerous. Could Christians face another genocide?
Kevin Clarke

The cost of not confronting Turkey over its historic injustices weakened Washington’s ability to sanction Mr. Erdoğan over the recent human rights violations mentioned above. After all, how could the United States hope to hold Turkey accountable for its modern-day crimes against humanity when it continued to grant Turkey impunity for the crime of genocide?

Recognition of the genocide is a commendable first step toward the justice owed to the Armenian people, and ending the longest “gag rule” in the history of U.S. foreign policy would be a signal to Turkey that its reign of impunity is over. At the same time, we must recognize that the genocide that began 106 years ago has not ended. It continues in the form of Turkey’s obstruction of justice for its victims and survivors, as well as its enduring aggression against the Armenian people in their ancestral lands.

The Biden administration’s global agenda of promoting human rights and renewing American alliances may still meet its strongest opposition from Mr. Erdoğan, and it must remain unwavering in its commitment to promoting those values vis-a-vis Turkey. 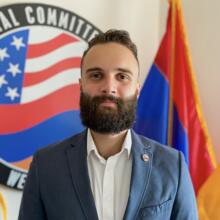 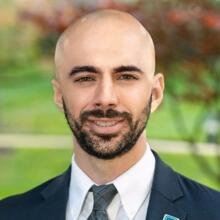 Steven Howard is the advocacy director at In Defense of Christians, which aims to preserve Christianity in the Middle East.

@smhfromthe408
Show Comments ()
Join the conversation: Login or create an account
Before you can comment, you need to update your profile to include your first and last name, as required in our comments policy. Then reload this page and you'll be set up for commenting. Update your profile