Turkey’s involvement in Armenia is dangerous. Could Christians face another genocide? 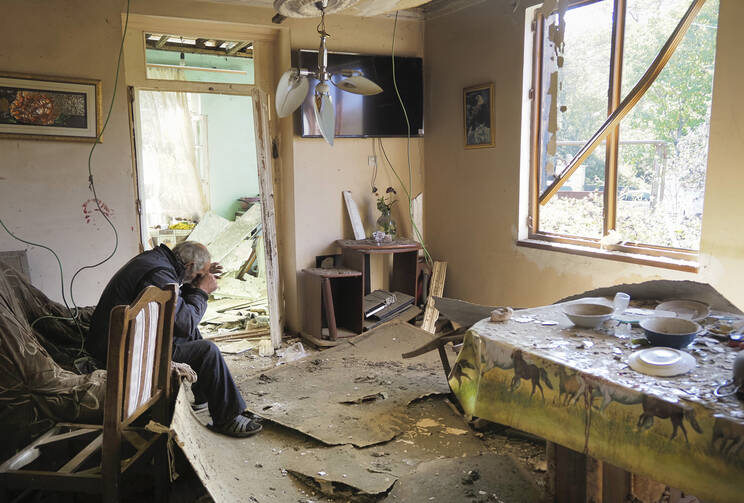 Yury Melkonyan, 64, sits in his house, damaged by shelling from Azerbaijan's artillery during a military conflict in Shosh village outside Stepanakert, the separatist region of Nagorno-Karabakh, Saturday, Oct. 17, 2020. (AP Photo)

Advocates for the protection of Christian minority populations raised an alarm about Turkey’s role in the renewed fighting between Azerbaijan and Armenian forces over the disputed territory of Nagorno-Karabakh. Hundreds have perished since this latest clash began on Sept. 27 in a significant escalation of the decades-old conflict. More than 30,000 were killed before the last large-scale confrontation between Armenia and Azerbaijan ended in a sullen truce in 1994. The territory continues to be internationally recognized as part of Azerbaijan, but that position is rejected by ethnic Armenians in Nagorno-Karabakh who represent more than 90 percent of its population.

Turkey, which as recently as July conducted military exercises with Azerbaijan forces, has taken a large role in supporting Azerbaijan’s military. Arms sales from Turkey to Azerbaijan surged sixfold in the months before the fighting began. As the fighting continues, some analysts worry other regional actors—Russia, which maintains a security pact with Armenia, and Iran, where errant artillery shells have already landed—might be drawn into the conflict.

But last week representatives from the international advocacy group In Defense of Christians and Armenian advocates warned of even darker outcomes should the international community not intervene immediately. They suggested that the Azerbaijani offensive against Nagorno-Karabakh—most of which is included in the Republic of Artsakh, a self-proclaimed ethnic Armenian statelet within Azerbaijan—could represent only the beginning of a renewed, genocidal aggression against the Armenian people.

Advocates demanded that Turkey and its president, Recep Tayyip Erdogan, be “heavily sanctioned” by the Trump administration because of Turkey’s material support of Azerbaijani forces.

The patriarch of the Armenian Apostolic Church, Catholicos Karekin II, shared those concerns in an interview with the Italian daily La Repubblica on Oct. 19. “What else is it if not genocide to indiscriminately bomb civilians, churches, the historical monuments of a people in spite of all international laws?” he said.

At a press briefing on Oct. 16, all fingers pointed to Turkey as the agitating force in the revived conflict. This latest Azerbaijani incursion in Nagorno-Karabakh fits both a contemporary and historic pattern, Christian advocates say, a drive to cleanse the region of Armenians and all Christians with an aim of establishing Turkish hegemony from the Middle East through Turkic-speaking states of the former Soviet Union.

Toufic Baaklini, the president of In Defense of Christians, joined other advocates in demanding that Turkey and its president, Recep Tayyip Erdogan, be “heavily sanctioned” by the Trump administration because of Turkey’s material support of Azerbaijani forces during this latest incursion into Nagorno-Karabakh.

He dismissed as insufficient recent protests against the violence and calls for a cease-fire from U.S. Secretary of State Mike Pompeo. “We have to continue to pressure, not in words but in action,” Mr. Baaklini said. “We expect the Trump administration to take some action to stop this holy war for [Mr. Erdogan].”

The Azerbaijani offensive against Nagorno-Karabakh could represent only the beginning of a renewed, genocidal aggression against the Armenian people.

He added, “U.S. policy toward Turkey is not working. The Trump administration and Congress need to heavily sanction Turkey and reassess their entire relationship in light of this hostility.”

Michael Rubin, a political analyst for the American Enterprise Institute, offered a harsh assessment of Turkey’s role in the new fighting and in creating instability throughout the region. He called Turkey’s motivations for jumping into the dispute as “malign as they can be.”

Noting that Turkey has always found supporters in Washington who make excuses for its actions in Syria, Iraq and other regional hotspots, he said, “When we look at what’s going on in Artsakh now, there absolutely is no excuse. Turkey has no claim, no history [in the dispute].

“It seems clearly now that Turkey’s sole motivation in helping Azerbaijan create these war plans, execute them and bring in mercenaries has been purely animus, not just to Armenians as a people but also to Christianity.”

These advocates said President Erdogan is driving to restore Ottoman-era borders at the same time he hopes to distract the Turkish people from repression at home and Turkey’s flagging economy. “Turkey is promoting jihadists and persecuting Christians all over the region,” warned Mr. Baaklini.

Speaking on a Zoom link from inside the disputed territory, Robert Avetisyan, the permanent representative of the Republic of Artsakh to the United States, described the Azerbaijani incursion as unprecedented in scope and violence. According to Mr. Avetisyan, the Azerbaijani military has put Caspian Sea oil sales to good use in a defense buildup in recent years with new technology and equipment from Turkey, Russia and Israel that it has now unleashed on both fighters and noncombatants in the Armenian enclave. He charged also that the Turkish military has moved from a hidden role in directing the incursion to open command and control of the entire offensive.

“The issue needs to be resolved, one that excludes the military solution permanently. After so many genocidal threats and so much aggression…no matter how many missiles [Azerbaijan possesses], you have to recognize the Republic of Artsakh.”

After weeks of fighting, the Azerbaijani “blitzkrieg” has failed, according to Mr. Avetisyan, even as indiscriminate shelling of military and civilian targets continues. He adds that the hardening of positions along the frontline suggests a long period of indecisive but bloody fighting ahead unless the United Nations and other multilateral players are able to pressure the two sides away from the battle lines and back to a negotiating table.

Two separate cease-fire agreements broke down in recent days. Each side has alleged that the other has targeted civilians indiscriminately, and evidence accumulates that accusers on both sides are right—Armenian artillery fire claimed civilian lives in Ganja, Azerbaijan’s second largest city, and in Nagorno-Karabakh Azerbaijani forces pummeled homes in Stepanakert, the capital of the separatist republic.

Mr. Avetisyan charged that “Turkey is completely hands-on in command and control; its special forces are penetrating into sleeping cities.” He alleges that Turkey has been responsible for moving “thousands of mercenaries from Syria and Lebanon” into the fight, an accusation which Turkish officials continue to deny despite mounting evidence of the presence of such fighters.

According to Mr. Avetisyan, the involvement of these mercenaries—battle-hardened by years of fighting in Syria and other Middle East conflict zones—means Nagorno-Karabakh has become the latest theater in the global war against terrorism.

The U.S. bishops and Pope Francis have urged a cease-fire and called for a return to the negotiating table. But views on both sides appear to have hardened since the 1994 truce. During the fighting in that earlier conflict, more than 600,000 Azerbaijanis were driven from Nagorno-Karabakh and adjoining Azerbaijani territory seized by Armenian military. They have been seeking a safe return ever since.

After years of fruitless negotiation through the Organization for Security and Cooperation in Europe’s Minsk Group, headed by representatives from Russia, France and the United States, many Azerbaijanis have come to believe that the military option is the only viable path to their return. For their part, Armenians in Nagorno-Karabakh believe they face an existential threat should the Azerbaijani military succeed in reclaiming the disputed territory and its surrounding districts. Neither side seems able to contemplate restoring a pre-conflict status quo that would allow displaced Azerbaijanis to return and ethnic Armenians to live in security and peace.

Mr. Avetisyan argued that talking, not fighting, is the only way to finally resolve the dispute over Nagorno-Karabakh. “Who can believe this is happening in the 21st century?” he asked.

For now, Turkey and Azerbaijan cannot be restrained by expressions of concern, Mr. Avetisyan said, calling for immediate sanctions to cut off Azerbaijani oil sales, as well as renewed efforts toward a stable cease-fire and a negotiated settlement to the territorial dispute.

Azerbaijan needs to get the message that it cannot have the disputed territory back, he said.

“The issue needs to be resolved, one that excludes the military solution permanently,” he said. “After so many genocidal threats and so much aggression…no matter how many missiles [you possess], you have to recognize the Republic of Artsakh.”

“Recognizing the self-proclaimed republic of [Artsakh] would be enough to solve the problem because it would guarantee the security of its citizens,” said Patriarch Karekin II. “That is what we are waiting for from our friends and from all those who want to prevent a possible new holocaust.”

Expressing mounting frustration with the lack of urgency in the State Department, these advocates called on the U.S. Congress to step in. Describing Armenia as a Christian island surrounded by hostile secular and Islamic forces, they warned that the Armenian Christian genocide is not an event that has passed into history, but a process that continues to this day.

“This is where Christianity began and can remain with our help and support,” Mr. Baaklini said. “We are the voice of the voiceless. If we fail to act right now, we would be implicated by our silence.”