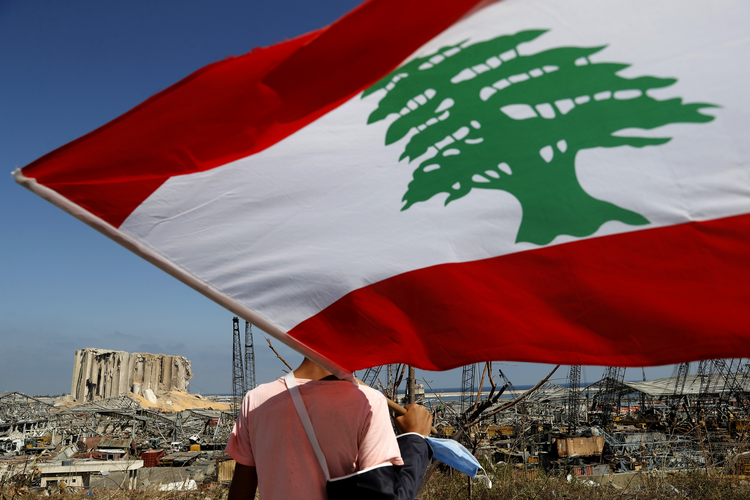 A man holds the Lebanese flag, as he looks at the scene of Tuesday's explosion that hit the seaport of Beirut, Lebanon, Friday, Aug. 7, 2020. Rescue teams were still searching the rubble of Beirut's port for bodies on Friday, nearly three days after a massive explosion sent a wave of destruction through Lebanon's capital. (AP Photo/Hussein Malla)

Pope Francis has again appealed to the international community to be “generous” with aid to Lebanon after last Tuesday’s “catastrophe.” He also called on the church in Lebanon to be close to all those who are suffering and to live a lifestyle of evangelical poverty.

Since today, Sunday, Aug. 9, is also the 75th anniversary of the dropping of the atomic bomb on Nagasaki, Francis also renewed his call for the total elimination of all nuclear arms.

He issued his appeal for Lebanon as world leaders from the European Union member states, China, Russia, the United Kingdom, Egypt and Jordan were about to begin a virtual conference, organized by France (the former colonial power in Lebanon) and the United Nations to raise aid for Beirut. France’s president, Emmanuel Macron, had visited the country on Aug. 6 and, according to the BBC, President Donald Trump promised Mr. Macron he would also join the conference.

Pope Francis: “Last Tuesday’s catastrophe calls everyone, beginning with the Lebanese people, to work together for the common good of this beloved country.”

The United Nations has expressed grave concern about food shortages in Beirut, as well as the fact that many homes are without water and electricity. There has also been a spike in the cases of Covid-19 in the country.

“In these days my thoughts often turn to Lebanon,” Pope Francis told the hundreds of pilgrims from many countries gathered in St. Peter’s Square under a blazing sun at midday on this very hot and humid Sunday. He spotted a group of Lebanese among them, waving the flag of their homeland and greeted them.

He said, “Last Tuesday’s catastrophe calls everyone, beginning with the Lebanese people, to work together for the common good of this beloved country.” He was referring to the explosions in the port of Beirut that devastated this city of some 2.4 million people, causing the death of around 158 people, injuring another 5,000. The blast left 300,000 homeless and forced countless thousands to leave the city to escape the toxic fumes from the explosions. Yesterday thousands took to the streets protesting what they see as the corruption and failure of government, and perhaps reviving the October Revolution, a series of similar protests last year.

Francis recalled that Lebanon, with a population of just under 7 million people, roughly divided between Muslims and Christians, “has a particular identity, fruit of the encounter of different cultures, that has emerged over the course of time as a model of living together.” But well aware of the nation’s political and social tensions, its ongoing economic crisis and its effort to cope not only with over 1 million refugees from the conflict in Syria but also with the spreading coronavirus pandemic, Francis acknowledged that “certainly, this coexistence is now very fragile, we know this. But I am praying that, with God’s help and everyone’s genuine participation, it may be reborn free and strong.”

He called in particular on the church in Lebanon “to be close to the people on their Calvary, as she has been doing in these days, with solidarity and compassion, with heart and hands open to sharing.”

He pleaded especially with the bishops, priests and religious of the Lebanon “to be close to the people and to live a style of life marked by evangelical poverty, without luxury, because your people are suffering, suffering a lot.”

Aug. 9 marks the 75th anniversary of “the tragic bombardments” of the Japanese city of Nagasaki, following the bombing three days earlier of Hiroshima, on Aug. 6, 1945, Pope Francis also remembered these anniversaries in his midday address and renewed his appeal for the  total abolition of nuclear arms.

He recalled his visit to both cities last November “with deep emotion and gratitude” and said, “I renew the invitation to pray and the commitment to a world completely free of nuclear weapons.”

In a landmark statement on nuclear arms in November 2017, Pope Francis categorically condemned not only “the threat of their use” but also “their very possession.” He restated this position when he visited the two Japanese cities last November.