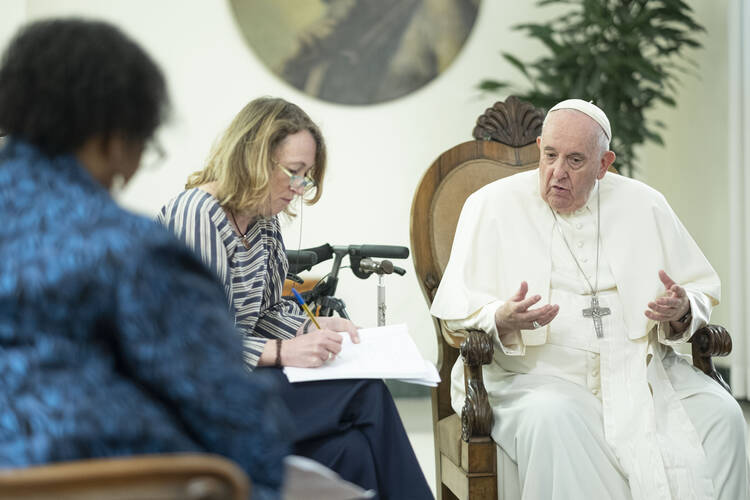 Last week, the Tuesday before Thanksgiving, Nov. 22, several members of the America Media staff had an exclusive two-hour sit-down interview with Pope Francis; it was published Monday the 28th.

The interview was wide-ranging and included questions on political polarization, lack of trust in the U.S. bishops conference, the war in Ukraine, transparency on sexual abuse cases, women’s ordination, encouragement to Black Catholics, and discussion of the Vatican-China deal. Since its release, international media coverage has focused on the pope’s decision to single out two Russian minority groups as being “perhaps the cruelest” in the war against Ukraine.

On this episode of “Inside the Vatican,” veteran Vatican correspondent Gerard O’Connell and host Colleen Dulle analyze the pope’s comments on Ukraine, as well as those on political polarization, the U.S. bishops, and women’s ordination.

In the first part of the show, Gerry gives an inside look into what it was like to interview the pope, and Colleen shares some exciting news.

Kerry Weber: Behind the scenes: What it’s like to interview Pope Francis

The Gloria Purvis Podcast: Gloria Purvis and Father Matt Malone on what their interview with Pope Francis means for the U.S. church