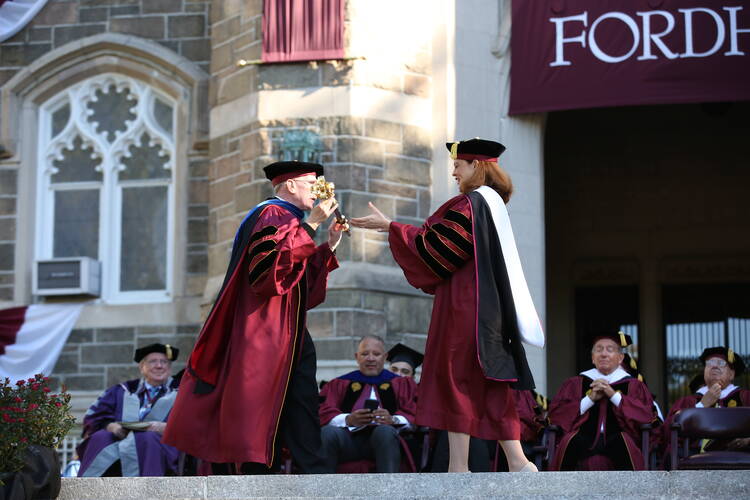 The soft gold and pale green of changing autumn leaves emboldened the color of maroon banners that hung around the Rose Hill campus of Fordham University on Oct. 14, as the 181-year-old institution celebrated a historic first. Tania Tetlow was sworn in as the 33rd president of Fordham University, the first layperson and first woman to assume the role. She was appointed in February and takes over from Joseph M. McShane, S.J., who has led Fordham since 2003.

During her installation ceremony, Ms. Tetlow spoke about her family history, which she described as one deeply interconnected with Fordham University. Her father, Louis Mulry Tetlow, served as a Jesuit priest for 17 years and came to Fordham to earn his Ph.D. in psychology with the Jesuits. It was here that he met her mother Elizabeth. He felt he was called to start a family and left the order.

“I like to think he made the right choice, but regardless, I hope I’ve made it up to the Jesuits,” President Tetlow said with a smile. She also discussed the history of Jesuit education and how it informs her own worldview, voicing her commitment to “fight the way the game continues to be rigged” and focus on social justice at Fordham.

Tania Tetlow was sworn in as the 33rd president of Fordham University, the first layperson and first woman to assume the role.

“We can never turn our back—not on those still climbing over the brutally unfair obstacles of exclusion and racism thrown in their way. Not on the new waves of immigrants,” she said.

A number of dignitaries were on hand to celebrate Ms. Tetlow’s installation, including Cardinal Timothy Dolan, the archbishop of New York, who used his remarks to welcome the new president and to thank her predecessor, Joseph M. McShane, S.J., for his two decades of service. Also speaking were Senate Majority Leader Chuck Schumer, a friend of Father McShane’s, and Marc H. Morial, former mayor of New Orleans and president of the National Urban League.

Mr. Morial said that President Tetlow had worked on his mayoral campaign when she was a student at Tulane University and praised her as an “anointed woman” who will rise to her new appointment.

Marc H. Morial praised her as an “anointed woman” who will rise to her new appointment.

Father McShane and Robert Daleo, a member of Fordham’s board of trustees, presented Ms. Tetlow with the ceremonial mace and chain of the office of president. She then gave her own inaugural address.

Issues of race and equity are some of the challenges that the Fordham community hopes Ms. Tetlow can address. Students have voiced concerns in recent years about gentrification in surrounding Bronx neighborhoods driven by Fordham students and racism within the community.

Senior Gemma Fahy is a student leader for Urban Plunge, a pre-orientation program designed to introduce first-year students to the surrounding Bronx and wider New York City communities. Ms. Fahy said that Ms. Tetlow came to visit a day of Urban Plunge programming in August, which she took to be a promising sign.

“She seems to really want to grasp and understand the Bronx community and Fordham being in the Bronx,” Ms. Fahy said.

She also said that she feels excited to be on campus during a historic first.

“As a student leader, I’ve been really fortunate to be surrounded by other women in student leadership positions. But seeing a female president, it means a lot to me,” Ms. Fahy said.

“As a student leader, I’ve been really fortunate to be surrounded by other women in student leadership positions. But seeing a female president, it means a lot to me.”

Another issue that lies ahead for Ms. Tetlow is unrest among adjunct faculty. In 2017, the unofficial organization Fordham Faculty United staged a string of public protests over the leadership of Father McShane and the conditions of their work.

Protesters showed up to Friday’s inauguration, leading chants during the academic procession. Adjunct faculty member Gregory Jost said that a contract between the university and its adjunct and contingent faculty has just expired, and that the university has been “not even moving” on their renegotiations.

Mr. Jost said he hopes that can change under President Tetlow.

“I want to give her the benefit of the doubt,” he said. “Here’s a great opportunity to show values.”

Ms. Tetlow said in her speech that she will refuse complacency and “what is easy,” instead putting the university’s efforts into addressing its difficulties.

The day of festivities ended with “PrezFest,” a celebration that included food and outdoor games. WFUV, Fordham’s radio station, hosted a concert in conjunction with inauguration ceremonies that featured the Preservation Hall Jazz Band, hailing from Tetlow’s native New Orleans.

During her speech, Ms. Tetlow struck an optimistic tone for her tenure as president.

“If we are ambitious for the cause, if we are humble and creative, if we stay true to our mission, there’s nothing we can’t do,” she said.

[Read Tania Tetlow’s Last Take essay for America magazine: “In an apocalyptic age of polarization, Catholic leaders must not shy away from the healing language of faith.”]

Correction: Ms. Tetlow’s first name was misspelled in an earlier version of this report.