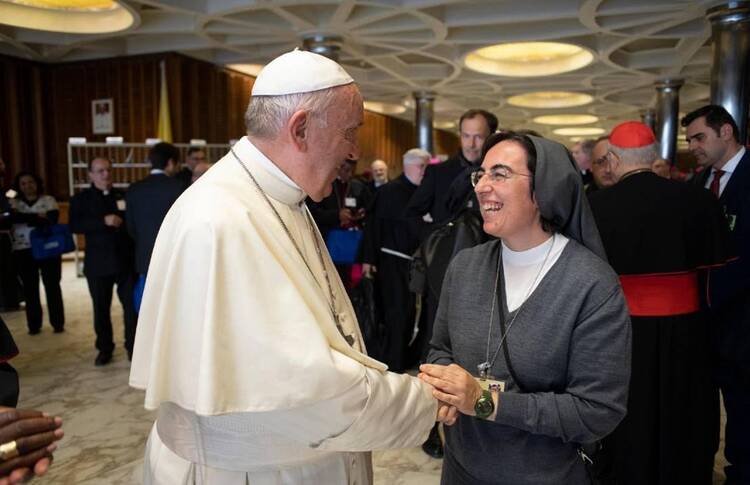 Pope Francis has made some surprising decisions that could be the prelude to a major shake-up of the Vatican dicastery for integral human development. He has appointed Sister Alessandra Smerilli, 46, an Italian woman religious and economist, as “interim secretary” of this important dicastery, the Vatican announced today. The appointment makes her the highest ranking woman in the Roman Curia. The dicastery has been headed by the Ghanaian Cardinal Peter Turkson since Jan. 1, 2016, when it was first established through the merger of four pontifical councils.

The new appointment replaces both the former secretary, the French monsignor Bruno Marie Duffé, 69, and the Argentinian adjunct secretary, the Rev. Augusto Zampini Davies, 52, both of whom are returning to their respective dioceses. Sister Smerilli is the first woman to hold such a senior-level post in the Roman Curia.

While the resignation of Monsignor Duffé took effect on July 1 and was well known in Rome, the news of the resignation of the dicastery’s dynamic adjunct secretary, Father Zampini, whom Francis had appointed to that post on April 8, 2021, was unexpected. Father Zampini had worked in the dicastery for two years when the pope appointed him as adjunct secretary, and he joined Cardinal Turkson and Monsignor Duffé in the leadership of the Vatican’s important Covid-19 commission. He is widely recognized as having made a major, creative contribution in helping to formulate not only the Holy See’s response to the Covid-19 pandemic but also its input into the social and economic changes that emerged in the immediate aftermath of the crisis. The fact that the pope accepted his resignation surprised many in the Vatican.

The Vatican’s announcement today said Pope Francis has decided that the new leadership of its Covid-19 commission would consist of Cardinal Turkson, Sister Smerilli and Fabio Baggio, C.S., a Scalabrini missionary who is currently under secretary of the section for migrants and refugees.

The pope’s decisions came after the completion of an evaluation of the dicastery that was conducted at his request, in June and July, by Cardinal Blase Cupich of Chicago, assisted by Helen Alford, O.P., vice rector of the Pontifical University of St. Thomas and a member of the Pontifical Academy of Sciences, and Pier Francesco Pinelli, an Italian managing consultant. While Francis has received the report of that evaluation, it is not known if his decisions announced today are directly linked to it.

The pope’s decisions came after the completion of an evaluation of the dicastery that was conducted at his request, in June and July.

Sister Smerilli was born in Vasto, a small city close to the Adriatic coast of Italy, in 1974. She studied economics before joining the Daughters of Mary Help of Christians, more commonly known as the Sisters of Don Bosco. After her religious profession, she continued her economic studies and gained a doctorate in political economy from Rome’s La Sapienza state university and a Ph.D. in economics from East Anglia University in Norwich, England.

The Salesian sister then went on to become a professor of political economy at the Pontifical Faculty of Educational Sciences Auxilium in Rome. Her commitment to the church led her also to be part of the scientific and organizing committee of the “Social Weeks” of Italy’s Catholics.

In 2019, the pope appointed her a councilor of the pontifical commission for the Vatican City State, and since March 2020, she has been coordinator of the Economy Task Force of the Vatican Commission for Covid-19, established by Pope Francis. In her work she has underscored the importance of bringing together Gospel values and good economics, assisting the Holy See’s commitment to ensure we emerge better from the pandemic.

Father Zampini communicated his decision to terminate his mission in Rome in a message sent to members of the dicastery on Saturday, Aug. 21, which was obtained by America.

He wrote: “The book of Ecclesiastes (3:1-2.5) indicates that ‘there is a time for everything...a time for planting and a time for uprooting.’ Today, after deep discernment, and in agreement and communion with my bishop and with Pope Francis, the time has come to stop embracing my mission in Rome, seeking to put down roots elsewhere.”

He expressed his gratitude to God, to Pope Francis as well as to Cardinal Turkson and “to all of you [in the dicastery] for having given me the opportunity to serve you during these years.”

Father Zampini told the members of the dicastery:

It has been a true honor to have participated in preparing the future in the face of a world that is sick, broken and wounded by multiple crises. Together we have built something creative, agile and professional, with an evangelical and pastoral foundation. Now it will be necessary to nurture that fertile ground that the Pope asked us to become, helping others, from below, to produce fruit, and fruit in abundance (cf. Mk 4:8).

He thanked them for their “hunger and thirst to promote integral development and integral ecology, where the poorest and the common home have the preference they deserve.”

He concluded by telling them, “I will never forget you; you will always be in my prayers. As the Pope says, please don’t forget to pray for me.”