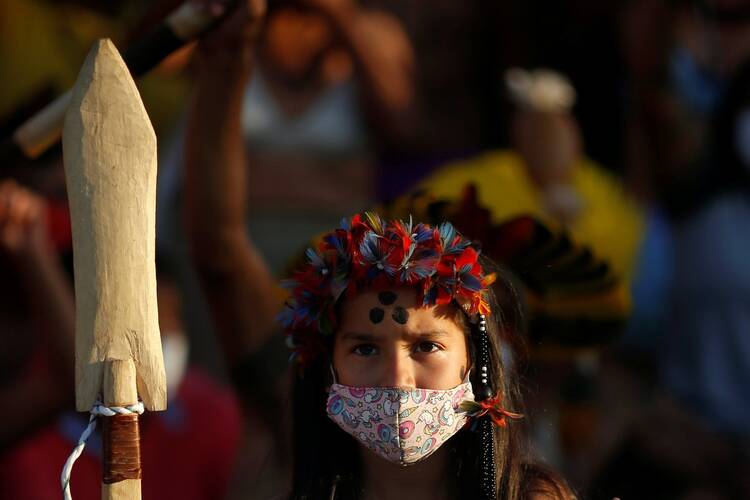 A young Indigenous person takes part in a protest against the land policies of Brazilian President Jair Bolsonaro's government, held outside the Supreme Court in Brasilia on June 18, 2021. (CNS photo/Adriano Machado, Reuters)

The invasion of public land by big landowners and illegal miners at the expense of Indigenous groups and small growers has led to record numbers of violent conflicts in Brazil’s rural and forest areas, especially in the Amazon.

Catholic activists have been denouncing violence against Indigenous people attempting to protect their territories and are opposing bills promoted by President Jair Bolsonaro’s allies in Congress that may intensify the problem.

The Pastoral Land Commission (known by its Portuguese acronym, C.P.T.), a committee of the National Conference of Bishops of Brazil, reports that 2020 was the most violent year in Brazil’s countryside since 1985, the year it first began to track land conflicts in the South American nation.

C.P.T.’s annual Atlas of Rural Conflicts showed that last year there were 1,576 land disputes, 315 more than in 2019, which had been the previous record year. More than 40 percent of the total cases involved Indigenous peoples. (Many of the other conflicts involved small growers using public land or quilombolas, descendents of enslaved peoples who settled in remote, largely unoccupied areas.) But of the 81,225 families who had their lands physically invaded last year, 72 percent of them were Indigenous.

Of the 81,225 families who had their lands physically invaded last year, 72 percent of them were Indigenous.

“The current administration signaled since the election in 2018 that it would favor invasions as it is doing now,” C.P.T.’s president, Bishop José Ionilton de Oliveira of Itacoatiara, Amazonas State, told America, referring to ranchers and miners occupying public land that has been set aside for Indigenous and other traditional communities. President Bolsonaro has always said that he would support changes in Brazilian law to legalize this kind of occupation, he added.

Land conflicts in Brazil are a historical problem. In colonial times, many regions were distributed among Portuguese aristocrats, but vast tracts of the interior were not owned by anybody. With independence in 1822, such areas became property of the Brazilian government, but most of this land was not put to any use.

Some land became unofficially occupied by small growers and traditional peoples, like Indigenous communities and quilombolas. But throughout Brazil’s history, politically powerful groups have seized such lands—often violently displacing their occupants and using fraudulent deeds. This process continues, especially in the Amazon.

“The Amazon is where most of the remaining public lands are located. That’s why 62 percent of the land conflicts in 2020 happened there,” explained Jean Ann Bellini, a member of C.P.T. and of the Sisters of St. Joseph of Rochester, N.Y.

President Bolsonaro promised that he would not grant any new territory to indigenous and quilombola communities, even though those groups have been suffering from seizures of their land.

In the Amazon, land grabbers are usually interested in extracting lumber and mineral resources or in denuding the land and transforming it into cattle pasture.

President Bolsonaro has indicated support for such efforts. He also promised that he would not grant any new territory to indigenous and quilombola communities, even though those groups have been suffering from seizures of their land. Even territories that are officially demarcated and reserved for Indigenous communities are continually infiltrated and reduced to ruin.

According to C.P.T.’s report, all those problems have intensified since Mr. Bolsonaro assumed office. It charges that more traditional communities and small growers have suffered violence, more conflicts have occurred, and more people have been killed under Mr. Bolsonaro.

“It’s not surprising for us,” Bishop Oliveira said. “That’s part of their agenda. Land reform is completely paralyzed.”

According to Ayala Ferreira, leader of the Landless Workers’ Movement in Pará State, the current administration does not have any intention to proceed with land reform programs and with the formal demarcation of indigenous and quilombola territories that would deter incursions.

For Indigenous groups all over the Amazon whose livelihood depends on their reserved territories, the situation is particularly alarming.

“Since 2019, we’ve been seeing the intensification of the exploitation of natural resources in the Amazon,” she told America, adding that human rights activists have also been arrested and sued for publicly demonstrating against these practices.

The economic crisis and the Covid-19 pandemic, according to Ms. Ferreira, have boosted the ambitions of land invaders concerning the rainforest. “When there’s a general situation of financial difficulty, the Amazon is usually seen as a repository of wealth,” she said.

For Indigenous groups all over the Amazon whose livelihood depends on their reserved territories, the situation is particularly alarming.

The Yanomami, an Indigenous group of 27,000 members, finds itself uncomfortably sharing its territory with 20,000 illegal miners.

According to a local chief, André Karipuna, his Indigenous community’s territory, located in Rondônia State, has seen a growing number of illegal miners and loggers since 2020.

“We’re very worried about our future. Not to mention the environmental impact of all this,” he said.

The Yanomami, an Indigenous group of 27,000 members, finds itself uncomfortably sharing its territory with 20,000 illegal miners. The community has been facing a dramatic situation, explained health care officer and community leader Junior Hekurari.

“In 2020 the number of illegal miners in our lands grew very much. They arrive in helicopters, planes and boats. They have firearms and threaten us all the time,” he said.

Since May 10, the Yanomami community Palimiú has experienced multiple attacks, he said. Miners on boats pass in front of the riverfront village and fire shots into it indiscriminately. There have been similar occurrences in other villages.

“They’re expelling us from our own lands,” Mr. Hekurari added.

“If a government agency comes and destroys their equipment, they reappear with new ones. They have plenty of money to keep their operations going. They’re expelling us from our own lands,” Mr. Hekurari added.

Big landowners and other segments that want to occupy public lands are a huge part of Mr. Bolsonaro’s political base. They are also allied with a large group in Congress, who have introduced a number of bills that favor land invasions.

C.P.T. and other Brazilian bishops’ ministries that work with rural and forest populations have been campaigning against these proposals.

Two bills will make it easier for private interests to seize the ownership of public areas, according to C.P.T. Another bill establishes that only traditional territories effectively occupied by Indigenous groups when the Brazilian Constitution was approved in 1988 can retain control of those territories now. It also makes it easier for entrepreneurs to introduce mining and agricultural activities in indigenous land.

Podcast: The Canadian Catholic Church’s role in the colonization and destruction of Indigenous lives
Gloria Purvis

C.I.M.I. activists charge that the proposal ignores the fact that most Indigenous peoples have been violently displaced from their traditional territories.

“The bishops of the Amazon already issued two statements against those bills,” Bishop Oliveira said. He fears their passage will only mean more confrontation and violence when new claims are made against Indigenous territories.

In June, 850 Indigenous activists camped in Brasília, the nation’s capital, in order to demonstrate against the proposed law. The bishops’ conference’s secretary general, Auxiliary Bishop Joel Portella Amado of Rio de Janeiro, visited the encampment and offered words of encouragement to the Indigenous demonstrators.

The proposition still has to be voted on by deputies and senators. Given that Mr. Bolsonaro has the majority of votes in both houses, political analysts in Brazil say that it will probably be approved.

C.P.T.’s Sister Bellini emphasized that the invasion of lands and the displacement of traditional communities from their territories can be likened to a death sentence for these communities, even when deaths do not result from the confrontations.

“If somebody destroys the environment where a community lives, it’s the community that is being destroyed,” she said.