Pope Francis: Lebanese political leaders should work for peace — not their own interests 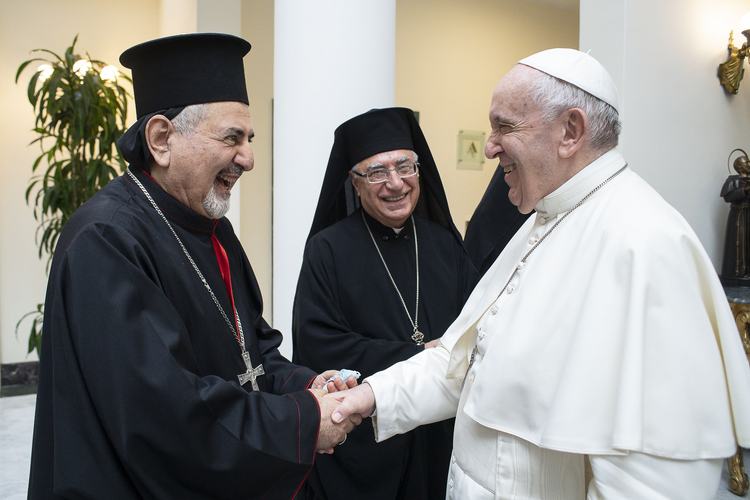 Speaking in St. Peter’s Basilica at the end of the day of prayer and reflection for peace in Lebanon with the leaders of that country’s Christian churches and communities, Pope Francis sought to encourage the Lebanese people by telling them that “in the night of crisis, all of us need to remain united.”

He told them he wished to visit their country and urged them to “not be discouraged, do not lose heart, find in the roots of your history the hope of a new flowering.” As Christian leaders, he said, “We want to affirm with all our strength that Lebanon is and must remain a project of peace.”

He promised that he and the other Christian leaders would pray constantly for peace in Lebanon and the Middle East and said: “Lebanon cannot be left prey to the course of events or those who pursue their own unscrupulous interests. It is a small yet great country, but even more, it is a universal message of peace and fraternity arising from the Middle East.”

Pope Francis sought to encourage the Lebanese people by telling them that “in the night of crisis, all of us need to remain united.”

Addressing the country’s political leaders, who have failed to form a government for 10 months, Francis said: “It is essential that those in power choose finally and decisively to work for true peace and not for their own interests. Let there be an end to the few profiting from the sufferings of many! No more letting half-truths continue to frustrate people’s aspirations!”

He appealed to these same leaders to “find urgent and durable solutions to the current economic, social and political crisis, mindful that there can be no peace without justice.”

He also asked that Lebanese women be included in the decision-making processes in the country.

The crisis in Lebanon has been aggravated by the political and financial interests and interference of countries in the region and beyond, including Saudi Arabia, Iran, Syria, Turkey and Israel. The pope called on these players to “stop using Lebanon and the Middle East for outside interests and profits.” His remarks were heard by the ambassadors from many of the 181 countries that have diplomatic relations with the Holy See who were present in the basilica as he spoke.

“It is essential that those in power choose finally and decisively to work for true peace and not for their own interests.”

Francis affirmed that “the Lebanese people must be given the opportunity to be the architects of a better future in their land, without undue interference.” He appealed to the international community to help Lebanon on this path by creating “conditions so that the country will not collapse but embark on a path of recovery,” which would be “to everyone’s advantage.”

Many had expected the pope to call for an international conference to help the country on this path, as the Maronite Patriarch had been pushing for. There is unease among other Christian leaders regarding this proposal, and Francis chose not to push for it.

Francis sought to encourage the five million inhabitants of this land, where Muslims are in the majority but Christians account for one-third of the population, by telling them that the Christians of Lebanon “assure our Muslim brothers and sisters, and those of other religions, of our openness and readiness to work together in building fraternity and promoting peace.”

He asked “forgiveness” for the mistakes Christians had made over the years “in failing to bear consistent witness to the Gospel” and for missing opportunities to foster “fraternity, reconciliation and full unity.” Looking to the future, he said, “We Christians are called to be sowers of peace and builders of fraternity, not nursing past grudges and regrets, but looking instead with hope to the future.”

“We Christians are called to be sowers of peace and builders of fraternity, not nursing past grudges and regrets, but looking instead with hope to the future.”

He declared that Lebanon is called “to be a land of tolerance and pluralism, an oasis of fraternity where different religions and confessions meet, where different communities live together, putting the common good before their individual interests.”

Pope Francis had opened this day of prayer and reflection in the Vatican on July 1 together with the nine leaders of Lebanon’s Christian churches and communities, seeking to offer hope and peace to a country that risks sinking into poverty and chaos.

He hoped to foster unity among the divided Christians communities of this land to work together for the common good, a Vatican source told America on the eve of this historic event.

Francis and Vatican officials believe that unity among Christians could make an important contribution toward the formation of a government that is urgently needed to address the dramatic economic, social and political crises that have brought this nation to its knees.

The pope declared that Lebanon is called “to be a land of tolerance and pluralism, an oasis of fraternity where different religions and confessions meet.”

Bishop Michel Aoun of Jbeil-Byblos of the Maronites shares this view. He told AsiaNews that he sees today’s meeting as an essential contribution to overcoming the many crises that afflict Lebanon.

Right now, he said, “there is no unity of intent, no positive pressure for the formation of a government, nor for party leaders to find a solution instead of just looking out for their own interests, be they Sunni, Shia or even Christian.”

For the Maronite bishop the problem is “the lack of a sense of unity.”

“At the end of the civil war that lasted between 1975 and 1990 there was no real reconciliation between people, an awareness and admission of wrongs, of the mistakes made, which would have enabled the country to be a message as John Paul II called it,” he said.

Bishop Aoun said Christian leaders “truly hope that Vatican diplomacy can help Lebanon and exert the right pressure for the birth of the long-awaited new government, which would be the first positive signal for the country and a necessary condition for the arrival of international aid.”

Bishop Aoun said Christian leaders “truly hope that Vatican diplomacy can help Lebanon and exert the right pressure for the birth of the long-awaited new government.”

The latest World Bank Lebanon Economic Monitor report released June 21 highlights key aspects of the dramatic crisis. The report said that “the economic and financial crisis is likely to rank in the top 10, possibly top 3, most severe crises episodes globally since the mid-nineteenth century.”

“In the face of colossal challenges, continuous policy inaction and the absence of a fully functioning executive authority threaten already dire socio-economic conditions and a fragile social peace with no clear turning point in the horizon,” the report said.

Various sources report that over 50 percent of the Lebanese people are living at the poverty level and more than 40 percent are unemployed. There is a serious lack of electricity, gas, gasoline, and a shortage of money due to bank controls and essential goods. Wages have been frozen for18 months, but prices have increased tenfold. All Lebanese, Muslim, Chrisitan or Druze, are suffering from this disastrous and potentially explosive situation.

Pope Francis concluded the day with an ecumenical service of prayer in the basilica, that included readings and prayers in Arabic, Syriac, Chaldean, and Armenian, and hymns.

In addition to all this, there are around two million refugees in the country, mostly from the conflict in Syria, but also many Palestinians from an earlier period. Many thousands of professionals, including doctors, engineers, professors and teachers, as well young people, have emigrated, a continuing exodus that includes many Christians. This has had a tremendous negative impact on hospitals and schools and left many communities with a majority of elderly people and young children, the Maronite bishop Samir Mazloum told the news agency AFP.

Francis began the day by greeting the Lebanese Christian leaders one by one in the Santa Marta Vatican guesthouse where he resides and where they are being hosted for this summit. Nine patriarchs representing the Catholic, Orthodox and evangelical Christian communities of Lebanon participated.

After the greetings, Francis and the Christian leaders walked together from Santa Marta to St. Peter’s Basilica, where the pope intoned the Our Father in Arabic— “Abana alathie.” They prayed in silence for several minutes in front of the altar of the confession in the empty basilica, before descending to pray at the tomb of St. Peter under the high altar, where they each lit a votive candle for peace.

From the basilica, they went to the Vatican’s Clementine Hall for three working sessions behind closed doors to share their reading of the current reality in Lebanon. The aim is to get a clear picture of the situation in the country and to reach, as far as possible, a common position on what is desirable and possible at this moment in the history of the country.

Pope Francis concluded the day with an ecumenical service of prayer in the basilica, that included readings and prayers in Arabic, Syriac, Chaldean, and Armenian, and hymns.