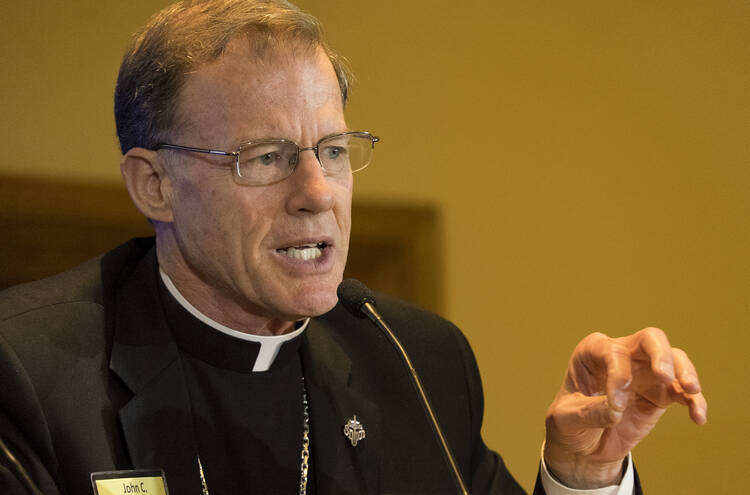 WASHINGTON (RNS) — Two Roman Catholic bishops and other church leaders have teamed up with the Human Rights Campaign, an LGBTQ advocacy organization, to condemn discrimination against transgender people, the groups announced Wednesday (March 31).

In a statement provided to Religion News Service, Archbishop John Wester of Santa Fe, New Mexico; Bishop John Stowe of Lexington, Kentucky; and the Association of U.S. Catholic Priests as well as the presidents of two Jesuit organizations declared that, “we, Bishops, religious and lay leaders of the Roman Catholic Church join with the Human Rights Campaign in calling for an end to the epidemic of violence against transgender individuals.”

March 31 has been celebrated as Transgender Day of Visibility since 2009.

The statement, which cites the words of St. John Paul II, notes that the Catechism of the Catholic Church insists “every sign of unjust discrimination” against LGBTQ people “should be avoided” and condemns violent acts perpetrated against transgender people in recent years that have been documented by HRC.

Two Catholic bishops and other church leaders have teamed up with the Human Rights Campaign, an LGBT advocacy organization, to condemn discrimination against transgender people.

“It is our Catholic duty to affirm the dignity of transgender people and to defend them from harm,” the statement reads.

The statement invokes St. Bonaventure — “we are led to contemplate God in (all creation)” — before adding “this is no less true of our transgender siblings.”

It concludes: “Transgender people have always been members of our local parishes and the witness of their lives ... leads us to greater contemplation of God and the mystery of our faith. To our transgender siblings, may you always know that the Image of God resides in you, and that God loves you.”

“It is our Catholic duty to affirm the dignity of transgender people and to defend them from harm,” the statement reads.

“The life-threatening violence against the transgender community, spurred by discrimination and hate, is a moral issue and one in which the voices of Catholic leaders are critical to the safety of our transgender siblings,” he said in a press release. “This is a critical moment to come together united, propelled by our faith, and lift our voices to unequivocally say that transgender rights are human rights, and they must be protected.”

The statement comes less than a week after Stowe publicly endorsed the Equality Act, a bill that would amend the Civil Rights Act of 1964 to offer anti-discrimination protection for LGBTQ Americans in an array of areas, including housing, education, lending and civic affairs.

“LGBTQ people reflect the image of likeness of God, just as anyone else, and so it is our duty to love and defend them,” Stowe wrote in a March 19 letter to Sens. Dick Durbin and Chuck Grassley, according to America Magazine. “As a Catholic bishop, I hate to see any form of harmful discrimination protected by law and it is consistent with our teaching to ensure that LGBTQ people have the protection they need.”

[Related: ‘It is our duty to love and defend’ LGBT Americans: Bishop Stowe breaks with U.S. bishops on the Equality Act]

Stowe’s support for the bill came in direct opposition to the U.S. Conference of Catholic Bishops, which has campaigned against the Equality Act and argued that it “discriminates against people of faith precisely because of those beliefs.”

None of the statements directly challenges church teaching such as the Catechism of the Catholic Church, which, among other things, refers to “homosexual tendencies” as “objectively disordered.”

None of the statements directly challenges church teaching such as the Catechism of the Catholic Church, which, among other things, refers to “homosexual tendencies” as “objectively disordered.” Earlier this month, the Vatican released a statement declaring that LGBTQ couples cannot receive a blessing by a priest.

“Since blessings on persons are in relationship with the sacraments, the blessing of homosexual unions cannot be considered licit,” read the statement, which was signed by the prefect of the Vatican’s Congregation for the Doctrine of the Faith.

Even so, the Vatican document is widely seen as evidence of growing discontent among some Catholics — including bishops — regarding the church’s approach to LGBTQ people and relationships: When German bishops met earlier this year, among the conversations with lay Catholics was the possibility of priests blessing same-sex couples.