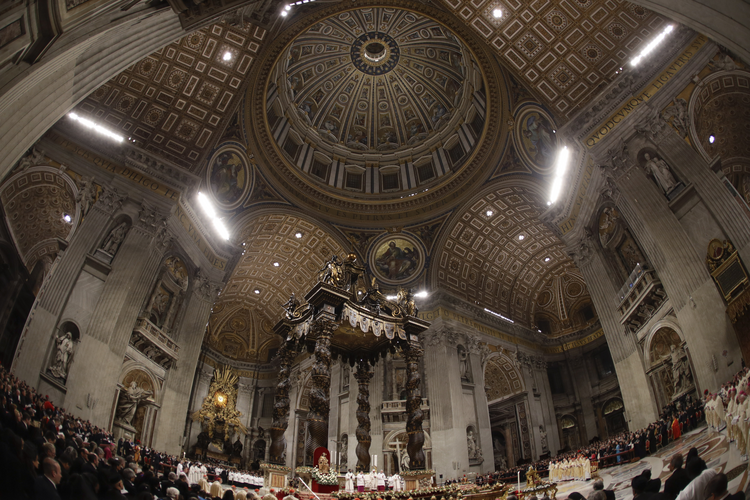 Pope Francis celebrates Christmas Eve Mass in St. Peter's Basilica in 2019. Vatican prosecutors have ordered the seizure of documents and computers from the administrative offices of St. Peter’s Basilica in an apparently new investigation into financial irregularities in the Holy See. (AP Photo/Alessandra Tarantino)

Vatican prosecutors on June 30 authorized the confiscation of documents and computers from the administrative and technical offices, which are part of the institution known in Italian as the “Fabbrica di San Pietro,” that is responsible for the upkeep and maintenance of St. Peter’s Basilica and the structures linked to it, including the excavations under the basilica.

They did so after receiving an alert from the Vatican’s auditor-general and, sources say, with the clearance of Pope Francis, who is determined to bring transparency to all Vatican financial operations.

The Vatican press office broke the news before midday. It said “the operation” for the confiscation of the items was authorized by the Vatican City State’s prosecutor (whose official title is the Promoter of Justice), Gian Piero Milano, and his assistant, Alessandro Diddi, after informing the Secretariat of State in advance.

The Vatican announced that Pope Francis has appointed a special commissioner to modernize and reorganize those same administrative and technical offices, improve transparency, and update their statutes.

At the same time, it announced that Pope Francis has appointed a special commissioner, Archbishop Mario Giordano, 78, to modernize and reorganize those same administrative and technical offices, improve transparency, and update their statutes to bring them in line with Vatican norms published on June 1.

It said that a commission would assist the archbishop “in this delicate task.”

Last year, the pope appointed Archbishop Giordano, a retired nuncio whose last posting was in Slovakia, to carry out an investigation into monies linked to concerts given by the famous Sistine Choir, which performs at all major papal liturgies in St. Peter’s Basilica. His investigation did not result in any criminal charges being brought, but the choirmaster took early retirement.

Today’s events are but the latest interventions by Pope Francis in his ongoing marathon effort to enforce accountability, eliminate corruption, ensure transparency and bring about savings wherever possible in all Vatican finances.

On June 1, Pope Francis issued a decree regarding “transparency, control and competition in the procedures for awarding public contracts of the Holy See and the Vatican City State” and introduced new legal norms for all such operations. He said the decree aims to ensure “a more effective management” of Vatican resources and to “reduce in a significant way the danger of corruption” in the awarding of contracts. That decree comes into force tomorrow.

The Vatican provided little explanation for the confiscation of documents and computers on June 30 or the appointment of a commissioner, but various Italian media, including Il Fatto Quotidiano, suggest the moves may relate to financial irregularities regarding work currently underway on the restoration of the cupola of St. Peter’s Basilica.

The Fabbrica, or as it is called in English, the Fabric of St. Peter, dates back to the year 1506 and the papacy of Julius II. Its role is described in the Apostolic Constitution of John Paul II, the charter that still governs the Vatican and the Holy See. Its Article 192 states that the office deals “with matters concerning the Basilica of the Prince of the Apostles, with respect to the preservation and decoration of the building and behavior among the employees and pilgrims who come into the church. Where necessary, the superiors of the Fabric act in cooperation with the Chapter of the Basilica.”

Currently, the Fabric falls under the responsibility of Cardinal Angelo Comastri, the archpriest of St. Peter’s. He is assisted by a bishop as his delegate, and what the Italian daily Il Sole 24 Ore calls “an army” of laypeople experts in the administrative and technical fields.

This latest development in the Vatican comes on top of the investigation currently underway regarding the Vatican’s purchase of a property in the upmarket Chelsea district of London amid allegations that a real estate intermediary had fleeced the Holy See out of millions of euros. Sources here expect developments in this case in the next month. No indictments have been handed down in that case, though a broker was arrested and then released earlier this month.