Australian bishop: respect for women is a top concern at Synod 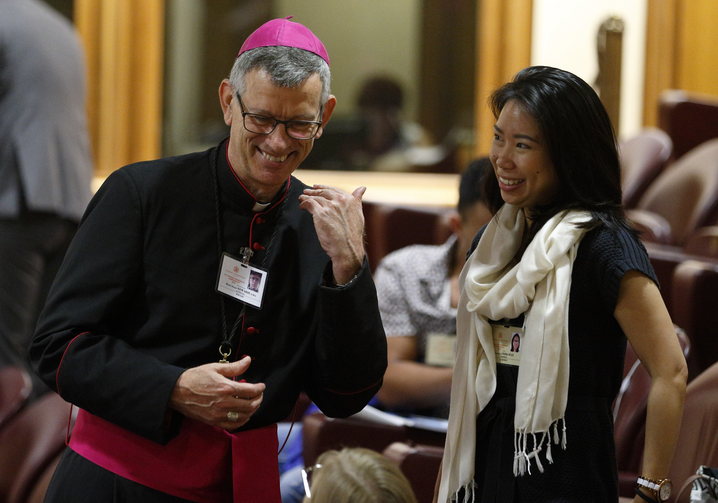 Auxiliary Bishop Mark Stuart Edwards of Melbourne, Australia, talks with Indonesian youth delegate Anastasia Indrawan before a session of the Synod of Bishops on young people, the faith and vocational discernment at the Vatican Oct. 9. (CNS photo/Paul Haring)

An Australian bishop with significant experience as a secondary school teacher and principal said in an address to the Synod of Bishops that young people are essential for helping the church to better understand the new era in Western culture, since young people “more instinctively grasp the lay of this land with its values of equality, inclusion, respect, authenticity and the integration of multiple aspects of life, such as body and soul.”

Several young people at the synod have noted the welcoming and inclusive style of Auxiliary Bishop Mark Edwards, O.M.I., of Melbourne, who used his allotted four-minute intervention at the synod on Oct. 5 to advocate for a “fertile intergenerational encounter” between bishops and young people.

Several young people at the synod have noted the welcoming and inclusive style of Auxiliary Bishop Mark Edwards.

In this intergenerational encounter, he said, the church might say to young people: “You show us the lay of this land, the way to the place where you dwell, and we will show you the way to God.”

Mark Stuart Edwards, 59, was born in Balikpapan, Indonesia, to a Dutch mother and Australian father. His father worked for an oil company, so the family moved a lot but eventually settled in Australia. Edwards attended Mazenod College in Melbourne, a high school run by the Missionary Oblates of Mary Immaculate. At the time, the Oblates decided to start a mission in Indonesia, and Edwards felt inspired to be a missionary in the place where he had been born.

He joined the Oblates after university studies, made his final profession in 1984 and was ordained a priest in 1986. Though he had the desire to serve as a missionary, his first assignment was to teach at the school he had attended in Melbourne. For the next 30 years, he was a teacher and principal in Oblate high schools and also worked in formation and taught philosophy.

He was ordained an auxiliary bishop in Melbourne on Dec. 17, 2014, and he serves as the episcopal vicar for secondary education and youth.

“I still identify as a missionary,” he told America in an interview on Oct. 22. “I am trying to build bridges.”

In the interview, Bishop Edwards said his experience as a school teacher helps him to recognize “the strengths of the young people as a living example of the strengths of current culture, the new era we are living into.” The bishop has also been influenced by Charles Taylor’s landmark book A Secular Age (2007), which he called “a great basis for missionaries.”

One of the key aspects of the new era, Bishop Edwards said, is “respect for other people,” particularly women and gay people.

“Charles Taylor gives me the intellectual framework to help me understand my school experience,” he said.

One of the key aspects of the new era, Bishop Edwards said, is “respect for other people,” particularly the need to “respect women and respect gay people.” He sees these attributes in the young auditors at the synod but added that it is “probably rawer and easier to see” in high school students.

“If I said something that wasn’t respectful of women or the L.G.B.T. community, the students would shut down,” he said. “It is helpful for me” to understand this dynamic “because I want to engage with them and offer opportunities where they can meet Jesus personally.”

Bishop Edwards said he has certainly heard from the young auditors at the synod about the importance of respect for women.

When the bishop asked a young auditor from Australia what he thought a future synod should discuss, the topics that came up were “inclusion, welcoming, women and leadership.” For this auditor, the bishop noted, “the next big area for the church to think about” is women.

“The church has a long timeline,” he said. “It is a 100-year process, but we have to keep taking steps.”

Bishop Edwards surprised some synod members when he invited a young auditor, Yadira Vieyra, to read half of their small group report to the synod body. Later she mentioned in an interview with Salt and Light Media that this moment was important to her as a young person and as a woman.

These two young people, both “heartfelt,” are signs of what young people think, he said. But Bishop Edwards also made it clear that any structural reforms that reflect the priorities and values of young people will take time.

“The church has a long timeline,” he said. “It is a 100-year process, but we have to keep taking steps.”

In relation to women in the church, the bishop said he is not sure what the next step looks like. “We have a picture of what the goal looks like—the dignity of women, women feeling appreciated, their gifts being used—but how do you get there?” he asked. “Maybe the next step will show itself once we take this step.”

A plenary council process that will run from 2018 to 2021 may indicate broader next steps for the Catholic Church in Australia. It is the fifth major assembly for the church in Australia and the first since 1937. The plenary will certainly take up the Royal Commission report on sexual abuse in the Australian church, but the bishops have been considering a plenary since 2000, Bishop Edwards noted.

The ordination of women “is not something we can move on, but what is behind it? Can we move on what’s behind it?”

The process is currently in an initial “listening phase,” he explained. People have been asked to gather in small groups of four to six people, pray to the Holy Spirit and answer one question: “What do you think God is asking of us in Australia today?”

The bishops want to hear what people think but also the stories that inform their perspective, he said. People have until Ash Wednesday to make submissions. Based on what people are already saying, Bishop Edwards is “pretty confident” that some of the common themes will be “governance, women, young people, how we are missionary and what we do with our schools.”

Bishop Edwards said that 10,000 submissions have already been received, but he is hoping for four or five times that number. People can say whatever they think they need to share, the bishop said.

“It has never been easy to be a Catholic, but now it is harder than it should be.”

Before the first plenary in October 2020 in Adelaide, a variety of theologians will write reflections on common themes, he said. A second plenary will take place in May 2021 in Sydney, where decisions will be made.

What’s it like being the only female cleric at the synod on young people?
Luke Hansen

Young Jesuit grad at the synod: justice for migrants is personal
Luke Hansen

The bishop is worried that people might not realize that now is the time to speak, and he also expressed concern about people’s expectations.

“I’m trying to get people to be cautiously optimistic,” he said. “We don’t have to have a plenary council. We really do want to listen. We want to know what God is saying to the church in Australia, and we think that wisdom is in the people.”

One of four auxiliary bishops in Melbourne, Bishops Edwards frequently visits parishes and assists with confirmations. Following the Royal Commission report, he says that part of his ministry is apologizing to people, especially to those who have been abused and those closest to them—but not only to them.

“The evil has washed out over all of us,” he said. “When these good people go to work and people find out they’re Catholic, people ask how they can support an institution that protects child abusers. It has never been easy to be a Catholic, but now it is harder than it should be.”

One of his dreams for the ongoing plenary process, he said, is that the small groups would involve people who feel “disenfranchised, distanced and maybe even angry with the church,” including people who are hurting from the sexual abuse crisis. “Then we would hear some voices that we need to hear.”

Luke Hansen, S.J., an associate editor at America from 2012 to 2014, is a licentiate student at the Pontifical Gregorian University in Rome.

As a fellow-Australian, I must dissociate myself from Auxiliary Bishop Mark Edwards' idealisation of "young people" (collectively) as a repository of wisdom on how the Church should improve itself, even though on the single occasion I have encountered the Bishop (at a Confirmation) I was favourably impressed by him. Since soon after Vatican II Catholic "young people" in Australian Catholic schools, as in Catholic schools in most of the West, have been designedly taught nothing or next-to-nothing about Christianity in general or Catholicism in particular apart from vague be-nice feel-good moralism, and Left-agenda prattle purporting to be "social justice". Garbage in, garbage out: if you ask typical Australian Catholic young people here “What do you think God is asking of us in Australia today?”(to quote the bishop), the minority who even care enough to bother to answer will suggest that the Church engage in more be-nice feel-good moralism, and more Left-agenda prattling purporting to be "social justice" advocacy. They will certainly not suggest (collectively) truthful teaching of the Church's doctrines and core traditions (if they have any idea that there are such things), or Church encouragement of social and cultural activism to protect Faith and Family against the ugly social forces corrosive of these.

Thank you for this article which shines a light on some of the Assembly topics. As a member of the Archdiocese of Melbourne I have seen Bishop Mark Edwards exercise his authority in a deeply authentic manner. I am pleased to see how effective his style is at the Assembly, and to hear his thoughts on the future.
Bishop Mark asks: “We have a picture of what the goal looks like—the dignity of women, women feeling appreciated, their gifts being used—but how do you get there?”
The answer is quite simple really. Ask women. Open up positions of collaboration and leadership to women applicants. Advertise roles! Insist that women are interviewed and listen to them. Talk to women religious who find all sorts of ways to do God's work. Talk to Pastoral Associates and Chaplains. Why do they do what they do? What issues do they have? What do they hope for?
Women want to give themselves and their gifts (and their families - who are not a handicap but a blessing!) to the service of the Church for the world. Open your minds and hearts and then you will see where the opportunities lie.