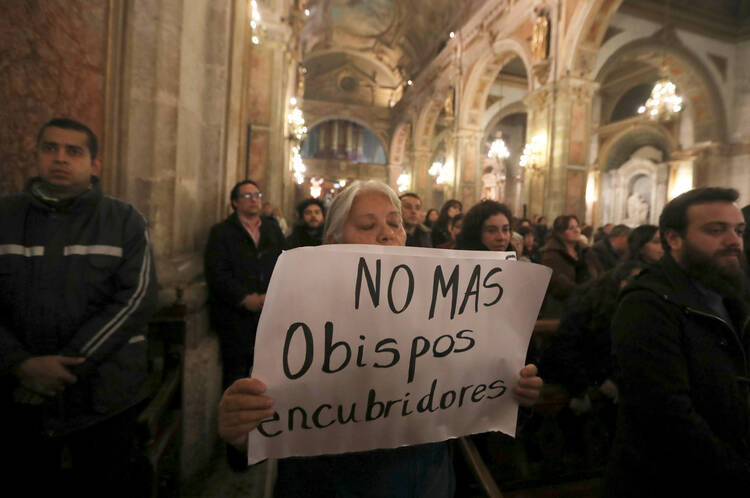 A woman holds a sign in protest while praying as Cardinal Ricardo Ezzati of Santiago, Chile, celebrates Mass on July 25 at the cathedral in Santiago. The Chilean prosecutor's office has issued a subpoena to Cardinal Ezzati regarding his role in the alleged cover-up of sexual abuse by clergy members. (CNS photo/Ivan Alvarado, Reuters)

A group representing 80 percent of Catholic sisters in the United States is adding its support to other sisters around the world who are calling for an end to sexual abuse and harassment of women religious, an issue brought to light most recently by a story written by The Associated Press.

“We join with all those demanding the end of a culture that ignores or tolerates sexual abuse of Catholic sisters or any other adult or minor perpetrated by those in positions of trust in the church community,” the Leadership Conference of Women Religious said in a statement. “Church authorities must take action to end a culture of silence, hold abusers accountable and provide support to those abused. We thank all those Catholic sisters throughout the world who, at great risk, have spoken publicly about their abuse.”

The A.P. report found that cases of abused nuns have emerged all over the world, including in Europe, Africa, South America and Asia. It cites recent cases of assault in Chile, India and Italy, added to the well-documented reports by religious sisters during the 1990s about clergy abuse in Africa. At that time, sisters were targeted because they were considered “safe” sexual partners during the height of the AIDS epidemic on the continent.

“We join with all those demanding the end of a culture that ignores or tolerates sexual abuse of Catholic sisters or any other adult or minor.”

In an email to America, the head of L.C.W.R., Teresa Maya, C.C.V.I., elaborated on the statement, saying, “Only by making these incidents public will the abuse stop.”

The group, she added, “also wanted to acknowledge the courage displayed by the Catholic sisters in other countries who had spoken out about their abuse, knowing that doing so could be very dangerous for them.”

Sister Maya said that through conversations with sisters from around the world, the L.C.W.R. found “that in many countries, clergy exercise great power and authority over sisters and can control their ability to work and serve the needs of the people.”

“From what we have heard, sisters who are sexually abused are very fearful about speaking out or reporting the abuse to civil and church authorities because of the possible consequences they might face,” she said.

As allegations of mishandling sexual misconduct involving cardinals, bishops, priests and other members of the clergy continue to rock the church, Sister Maya said, “the Vatican and local churches have to make stronger efforts to put an end to sexual abuse.”

“While orders of Catholic sisters can raise their voices about the prevalence of sexual abuse, the reality is that in many countries, sisters do not have the power or authority to impact the culture that exists of silence about, and tolerance of, abuse by clergy,” she said.

“The Vatican has to demand accountability from the local churches and clergy and must hold them accountable for any abuse committed, and the local churches have to take this situation seriously and act with urgency and forcefulness to put an end to this culture of sexual abuse.”

Standing headline: LCWR blames episcopal authority for... well, everything. And they, American women religious, because an AP report found sexual abuse in every continent but don’t mention North America. Attacking the idea of episcopal authority does not make it unnecessary. More importantly, LCWR proposes nothing useful for making the episcopacy more holy and responsible.

I do not understand why Pope Francis accepted a “resignation” from Cardinal McCarrick, when he should have been “removed” from his position of honor by the Pontiff. This reads as though the Cardinal made the decision.

why do so many of these public statements by employees of RCC all use the same cliches--the Vatican MUST do something! Why are you asking the source of the problem to be the problem solver? Instead demand that the civil legal authorities jail these criminals from the top down--stop giving the Catholic Church a pass in the naive belief that it can fix its own corruption.

St. John Paul II expressed a desire to bring women more fully into the decision-making processes of the Church. This is the time.

I sent a message to the American Religious Sisters of Mercy concerning their counterparts in Ireland; the latter took the side of people who made false allegations of child rape and murder against their own colleagues - and failed to withdraw their support from false accusers even when the Court of Criminal Appeal issued a Certificate of Miscarriage of Justice to one former nun! I wrote:

Regarding the visit of Pope Francis to Ireland, can the Irish Sisters take this opportunity to withdraw their apology to the accusers of Nora Wall (formerly Sister Dominic). See Wikipedia article on Nora Wall. Also reprimand our current Minister for Justice Charlie Flanagan for repeating in 2009 a libel for which Nora Wall had received damages from the Sunday World in 2002. He did so under Parliamentary Privilege and the Irish Sisters said nothing at the time. http://irishsalem.blogspot.com/2017/10/justice-minister-charlie-flanagan-and_3.html … My blog is http://IrishSalem.blogspot.com and the Profile section contains a link to my Background.

Finally the Irish Sisters should withdraw their apology to the Howe family who accused Sister Xavieria Lally of murdering baby Marion Howe with a red hot poker in 1955. The Howe's made that claim in an article in the Daily Mirror on 11 October 1997. Try googling the headline "HOT POKER WAS USED ON LITTLE MARION.. NO CASH WILL GET HER BACK; I THINK MY BABY WAS MURDERED AT THE ORPHANAGE, SAYS PAYOUT MUM".

Daily Mirror executives rightly believed that the Sisters of Mercy would not object and would prevent Sister Xavieria from defending herself or suing for libel. An article in the far more "respectable" Irish Times on the same date observed: "Why then has the order issued qualified apologies? Why has it paid compensation to the Howes, albeit a relatively meagre sum? Is there not a tacit admission here that what these people say happened did happen? Or are we to believe that the Sisters of Mercy have taken to paying compensation and issuing apologies for things that didn't happen at all?"

In contrast Nora Wall, no longer a Sister of Mercy, successfully sued the Sunday World for libel in 2002, received a Certificate of Miscarriage of Justice from the Court of Criminal Appeal in 2005 and successfully sued the Irish Government and Director of Public Prosecutions in 2016 (after a battle lasting a decade which her former colleagues ignored). Sister Xavieria is now deceased but is owed an apology by her colleagues who betrayed her and allowed her to be vilified precisely because she did NOT leave the Congregation. The visit of Pope Francis, the Pope of compassion should motivate those colleagues to repent and - at the very least - withdraw their apologies to those who slandered Nora Wall and Sister Xavieria.

No reply from either the Irish Sisters of Mercy - or their American counterparts. I presume the latter are part of the group who are now criticising the Bishops for failing to protect nuns!!