Thoughts on the Magdalene, Part 2 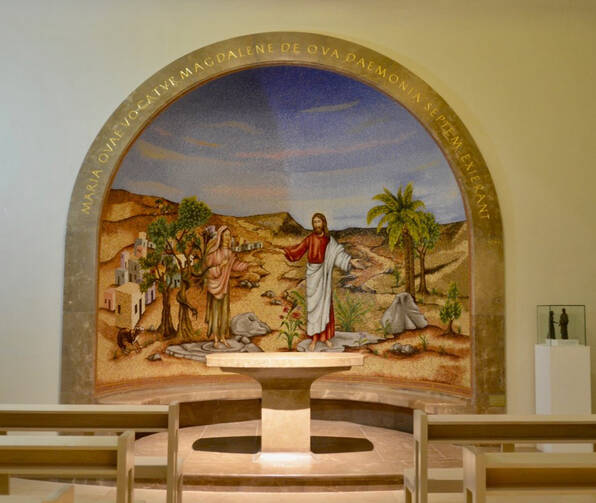 A mosaic of Christ and Mary Magdalene is seen in the "Duc in Altum" in Magdala, Israel.(CNS photo/Josephine von Dohlen)

Books are important. Good novels and good historical texts slow us down and help us learn. The act of reading itself unfolds in time—slowly—as readers negotiate meaning with a code recorded on a page using their own experience and the resources of their imagination. We consider books here each quarter in this space for the Catholic Book Club because books are both lively packages of useful knowledge and repositories that stir reflection on the most meaningful elements of human life—faith among them.

Given the present reality of the spread of a virus that threatens the way of life of all human beings, many contemporary writers are returning to a particular book—Albert Camus’s postwar novel, The Plague. Matt Malone, S.J., editor in chief at America, alluded to Camus’s work only a few days ago. Father Malone was reflecting on notions of community evident in The Plague as well as the irascible Jesuit character who goes from condemning a city to joining a squad of men working to contain the contagion by removing corpses. The Jesuit dies helping to protect the people of a city he had once judged irredeemable.

The Magdalene in the Reformation analyzes the conceptions of Catholics and Protestants of a woman who, as the Gospels testify, was graced with an intimate relationship with the person of Jesus Christ.

And, just recently—on the feast of St. Joseph—The New York Times published an op-ed piece reflecting on The Plague and our current situation, by the writer and philosopher Alain de Botton. In the newspaper’s already stark opinion section, Botton offers the following interpretation of Camus and human life in general: “Plague or no plague, there is always, as it were, the plague, if what we mean by that is a susceptibility to sudden death, an event that can render our lives instantaneously meaningless.”

“Instantaneously meaningless” is a terrifying phrase. If faith and prayer and books teach us anything, it is that human lives—no matter how short or long—are utterly meaningful. They are made meaningful by relationships. For Catholics, demonstrably meaningful lives emerge through a network of relationships: intimate, familial, communal, spiritual, ecclesial. Furthermore, our relationships extend beyond death to a communion of saints and souls. Our lives as Catholics are wide with relationships that enliven our faith communities and our Catholic institutions like schools and hospitals. Yet, even more fundamentally, our lives are anchored in a relationship with Jesus Christ.

The Catholic Book Club continues its consideration of The Magdalene in the Reformation this quarter with a reflection on the second half of Margaret Arnold’s wonderful book. At its heart, the book analyzes the conceptions of Catholics and Protestants of a woman who, as the Gospels testify, was graced with an intimate relationship with the person of Jesus Christ. And—for us, for Arnold—Mary Magdalene is an eminently meaningful person in the Christian tradition, not only because of her relationship with Christ but by virtue of her relationship to Christians throughout the history of the church.

For many, particularly many Christian women, Mary Magdalene becomes an example of a vocation of contemplation, of preaching and teaching, or of humble penitence.

For many, particularly many Christian women, Mary Magdalene becomes an example of a vocation of contemplation, of preaching and teaching, or of humble penitence. But above all, she is an example of the possibility of humanity’s closeness to Jesus and how one should lead one’s life in recognition of such nearness.

Chapter 5 of Arnold’s work, “Love Made Her Dare: The Magdalene among Catholic Women,” explores not only the notion of intimacy with Christ that Mary Magdalene embodies, but it considers the identification Catholic women felt with the Magdalene. This chapter is fascinating. Through Arnold’s scholarship we meet several Catholic women of early modern Europe directly through their own writing: Teresa of Ávila, María de San José Salazar, Louise de La Vallière, Vittoria Colonna, Jeanne Guyon and Marguerite de Navarre.

The complexity of Catholic women’s experience during the years of reformation and counter-reformation correspond to the complexity and richness of the character of Magdalene.

In agonizing over the nature of her own religious community’s work and the tension between contemplation and labor—apostolic and domestic—Teresa of Ávila prays with the scriptural composite of Mary Magdalene, especially Mary either at the feet of Jesus or at the tomb. She also admits feeling envy toward Magdalene, who seems so close to Jesus in her contrition and forgiveness as well as in his suffering and resurrection. In her own struggle to reform the Discalced Carmelites, Teresa often relied upon a melding of Mary—assumed to be Magdalene—and Martha. She even elevates Martha to equality with Mary—an equality of love for Christ:

I sometimes remember the complaint of that holy woman, Martha. She did not complain only about her sister, rather, I hold it is certain that her greatest sorrow was the thought that You, Lord, did not feel sad about the trial she was undergoing and didn’t care whether she was with you or not. Perhaps she thought You didn’t have as much love for her as for her sister.... Love made her dare to ask why You weren’t concerned...for love alone is what gives value to all things; a kind of love so great that nothing hinders it is the one thing necessary (131-32).

Teresa has an extraordinary spiritual insight into Martha: Love for Christ made Martha dare to ask about her own effort to serve the Lord in work rather than contemplation. Love for Christ made Teresa to dare work more apostolically. Teresa’s successor, María de San José Salazar, appealed directly to Magdalene to protect her order’s practice of spiritual and theological conversation from being abolished by clerical injunction:

We also know that He first revealed the most high mystery of His Resurrection to Mary Magdalene and the other Marys and commanded them to announce it to their brothers. So there is no reason for us to be excluded from speaking and communicating with God, nor should we be kept from telling of His greatness or from wanting to know of the teaching; and in this lies what should serve as a bridle to curb bold women. I say we should speak and know of the teachings, not that we should teach (137).

The mystic Maria Maddalena de’ Pazzi, a contemporary of Salazar, took this identification with Magdalene even further. She felt an “irrepressible call to mission” that stemmed from her mystical encounters with Jesus (138). Louise de La Vallière, however, identified with Magdalene in a different way: as a holy penitent transformed by the mercy of Jesus Christ (139-40). Genevieve Fayet, a French lay woman, citing Magdalene’s authority in her proximity to Christ, catechized throughout villages and taught the faith to crowds of people (144).

"Early modern Christians were grappling with the question of vocation: the call to testify to salvation and live a sanctified life in the world. The Magdalenes of the age gave shape to new understandings of the self before God and before others."

The complexity of Catholic women’s experience during the years of reformation and counter-reformation correspond to the complexity and richness of the character of Magdalene. Women’s relationships with the Magdalene and her story—particularly her closeness with Christ—brought meaning and a sense of vocation to their lives.

In the last pages of her book, Margaret Arnold offers the following:

Looking together at the Magdalene’s three identities [the sister of Martha, repentant sinner at the feet of Christ, Magdalene at the tomb] and their interpretations in the traditions that emerged from the age of reform, we find a common concern, one that is only underscored by the diversity of its expressions. Early modern Christians were grappling with the question of vocation: the call to testify to salvation and live a sanctified life in the world. The Magdalenes of the age gave shape to new understandings of the self before God and before others. Through the image of the Magdalene, previous conceptions and obligations of Christian life were variously rejected or refined, argued with and adapted (242).

This is a wonderful summation of Arnold’s historical portrait of Mary Magdalene as received by the denominations emerging during the Reformation and early modern Europe. Magdalene was not left behind by the Protestant traditions because “these Magdalenes” became central to interpretations of the resurrection, conceptions of religious life, women’s authority to speak and teach publicly in communities of faith, and basic understandings of vocation in the church. Magdalene’s cult, her story, her spiritual companionship and identity enriched the lives of Christian women as the church around them tore and changed and reconstituted itself. One’s relationship with Magdalene fostered spiritual insight, consolation and, most of all, meaning.

When only Mary Magdalene knew of the resurrection
The Editors

Perhaps it is best to end this consideration of Arnold’s work with another type of text: a poem. In her chapter on “Magdalene in the Reformed tradition,” Margaret Arnold includes the text of John Donne’s poem honoring Lady Magdalene Herbert, the mother of George Herbert, as an expression of the complexity of Mary Magdalene and her continued importance as a model of holiness and intimacy with Christ:

Her of your name, whose fair inheritance

Bethina was, and jointure Magdalo,

An active faith so highly did advance,

That she once knew more than the Church did know,

The Resurrection; so much good there is

Deliver’d of her, that some Fathers be

Loth to believe one woman could do this;

But think these Magdalenes were two or three.

Increase their number, Lady, and their fame;

To their devotion add your innocence;

Take so much of th’ example as of the name,

The latter half; and in some recompense,

That they did harbor Christ Himself, a guest,