As Hurricane Ian recovery begins, lessons from a Florida Catholic Church that had to rebuild after Hurricane Michael 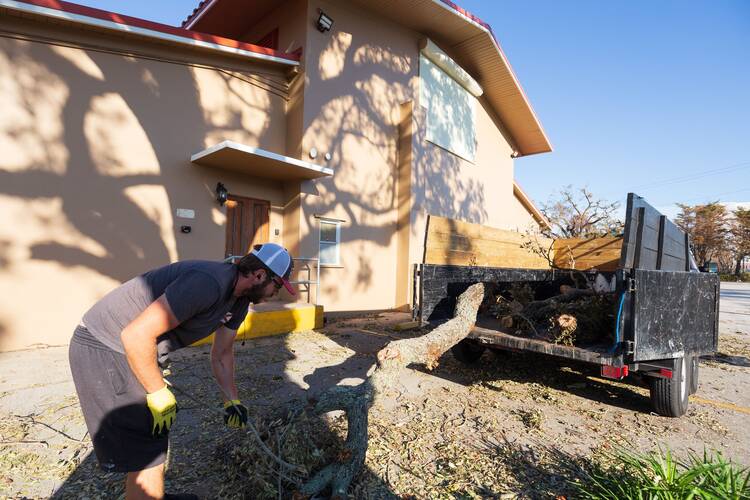 When Hurricane Ian made landfall on Sept. 29, images of leveled palm trees and swamped streets in eastern Florida dominated the news and social media.

Father Michael Nixon, pastor of St. Dominic’s in Panama City, Fla., looked on with sadness and compassion at the devastation inflicted by Ian. He knows from experience how difficult the path ahead will be for those rebuilding their lives, their communities and their churches.

On Oct. 10, 2018, Hurricane Michael made history as the first recorded Category 5 hurricane to hit the Florida Panhandle. It was one of the most destructive storms ever to hit the state, with over 50 deaths attributed to the hurricane and its aftermath.

Hurricane Michael was one of the most destructive storms ever to hit the state. Four years later, Father Nixon and the St. Dominic’s community are still picking up the pieces.

Four years later, Father Nixon and the St. Dominic’s community are still picking up the pieces. Americafirst spoke with him in the immediate aftermath of Hurricane Michael, when the church parking lot was serving as a home base for Catholic Charities efforts in the area. When America checked in with him this month, Father Nixon said that the parish’s progress in rebuilding has been inspiring—but still has a long way to go.

When Father Nixon emerged from the rectory stairwell on Oct. 10, 2018, with an associate pastor, a seminarian and his dog, he saw an almost unrecognizable St. Dominic’s campus.

“We lost upwards of about 100 trees. Our steeple was torn off the church… so the whole church was soaked,” he recalled.

The biggest losses were the parish hall and religious education buildings, which were unsalvageable.

“Basically, the roofs had totally been torn down. It was more or less just walls,” Father Nixon said.

But focus on those buildings would need to come later, outweighed by the enormity of the parish community’s human needs. St. Dominic’s sits near the border between Panama City and the town of Springfield. The two communities have median household incomes of $48,185 and $40,103. Many low-income families had lost their homes and had no food. The parish community wanted to attend to those needs first.

The local Catholic Charities office unloaded an entire semi-trailer’s worth of water bottles the day after the storm. Within days, Father Nixon said, hundreds of volunteers were showing up at the parking lot to serve hot meals, pass out emergency supplies and join together for Mass. He celebrated two weddings in the parking lot during the relief effort.

“People continue to stop me now,” he said, “almost four years after Hurricane Michael, and they’ll say, ‘Look, if y’all hadn’t been doing what you were doing, we wouldn’t have gotten food.’”

The local Catholic Charities office unloaded an entire semi-trailer’s worth of water bottles the day after the storm. Within days, hundreds of volunteers were showing up at the parking lot to serve hot meals.

As the survival needs were met over the next months, Father Nixon said that parishioners began to consider the task of rebuilding. They began with the church itself.

The community had to begin by recognizing that restoring the church was going to be a long project. “There’s not really much you can do with it. There [was] very little to salvage,” he remembered.

Masses were celebrated under a temporary white tent erected in the church parking lot, equipped with air conditioning units that strained to handle the oppressive heat and humidity during summer months. The priests moved to a rectory at a nearby parish and commuted to the tent for Mass. Work was painfully slow.

But in the midst of the struggle came a small beacon of hope: A single stained-glass window had survived the hurricane, a depiction of the Resurrection. The tent rental company had the image recreated on vinyl and donated it to the parish, and the impromptu icon was hung inside. It would remind the St. Dominic’s community to keep looking forward.

“It’s sort of claiming that day, which I think is very biblical, and how the Lord works,” Father Nixon said. “As painful and tragic as that day is, it’s now a feast day for our parish.”

But restoring the church itself is only one part of rebuilding the parish. On Aug. 8, the Feast of St. Dominic, Father Nixon launched another campaign to replace the parish center. The $3.2 million project will provide more space for the church’s food pantry and kitchen. The importance of that ministry became especially clear during the recovery and because of the impact of the Covid-19 pandemic that followed it.

The new structure will be more resilient against hurricane winds, and it will be equipped this time with generators so the parish center can serve as a community refuge should a storm come through again. A building “that’s gonna withstand a storm like that, obviously, but also to be able to be useful in the days and weeks and months following, I think is really key for us,” Father Nixon said.

With climate change contributing to stronger storms and longer hurricane seasons, it is unfortunately likely that St. Dominic’s will face a hurricane threat again. Father Nixon hopes the parish can be a survival resource when that happens. Some of his parishioners still remain homeless four years after Hurricane Michael, he said.

He recalled in the weeks after the storm as he was continuing to assist survivors how often people, only half-jokingly, told him, “Father, you were never trained for this in the seminary.”

“No, I wasn’t,” he said, “but none of us really were [trained for recovering from a storm]—nobody who’s rebuilding their house from scratch and trying to figure out if their business can stay in business…. We have to figure out a way to do it.”

Many people across Florida will be embarking on a similar journey of reconstruction and recovery in the aftermath of Hurricane Ian. Father Nixon offered his prayers to all those suffering across the state.

“There’s so much grace in the midst of this. And I don’t say that as a saccharine thing for those that are going through it, either,” he said. “It’s a crucified reality. It’s a painful reality,” but the grace in it “is very, very true.”