Prenatal tests for autism are coming—and so are more abortions 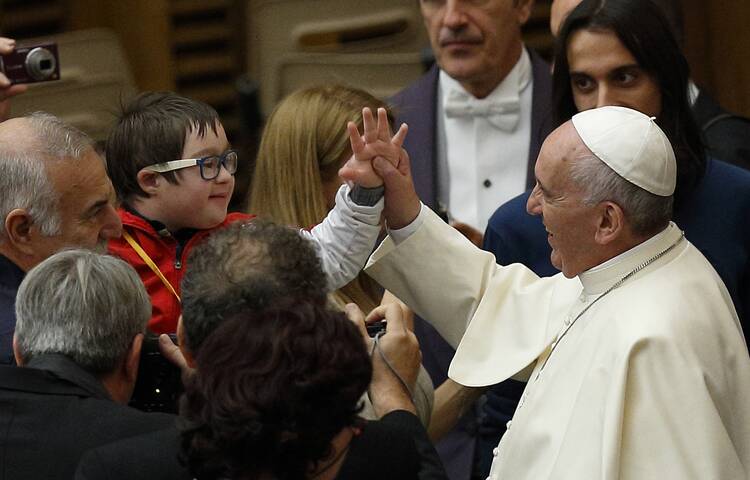 Pope Francis greets a child during an audience with people who have autism at the Vatican on Nov. 22, 2014. (CNS photo/Paul Haring)

Having complete knowledge about a medical condition is a good thing, and prenatal screening tests can be good in the sense that they help prepare parents for extra needs their child might have. Unfortunately, we live in what Pope Francis calls a “throwaway culture,” and parents can also use these tests to determine whether or not to abort their children.

This has already been the case with testing for Down syndrome, and the possible development of prenatal tests for autism raises new dangers. As an autistic, I worry that these tests will lead to aborting people like me. I myself would not have been aborted as my mom is fully pro-life, but I feel so sad for others who might have been. In a previous piece for America, I proposed that people fighting for disability rights and people fighting against abortion should work together; the introduction of testing for autism reveals another point where collaboration can happen.

People fighting for disability rights and people fighting against abortion should work together; the introduction of testing for autism reveals another point where collaboration can happen.

I am writing now because a group of neuroanatomists recently presented a paper to the annual Experimental Biology conference in which they suggested that M.R.I. brain scans on fetuses are able to predict diagnoses of autism; specifically, they reported finding a brain region, called the insular lobe, that was much larger for autistic children than for children without autism. Dr. Alpen Ortug, one of the authors, told the journal ZME Science: “Earlier detection means better treatment. Our results suggest that an increased volume of the insular lobe may be a strong prenatal M.R.I. biomarker that could predict the emergence of A.S.D. [Autism Spectrum Disorder] later in life.”

This study was exploratory; brain scans were given to only 39 fetuses, nine of whom later received an autism diagnosis. So doctors will not likely be offering autism tests to expectant parents soon. Nonetheless, we are not in the realm of science fiction. Now is the time to deal with the ethical issues around such a test—not after it is commercially available.

A study in Taiwan asked parents of autistic children about a hypothetical situation in which they became pregnant again and autism was diagnosed prenatally: 53 percent said they would abort such a pregnancy.

As this screening is not available yet, we do not have data on the possible implications of its use, but we can get an idea by looking at other conditions. In recent years we have seen many stories on the abortion of children diagnosed prenatally with Down syndrome. In fact, Iceland is said to have almost eliminated it: Close to 100 percent of mothers there who received the prenatal diagnosis since the early 2000s have aborted the child. The United States’ rate is not that high, but the best estimate is that about two-thirds of babies diagnosed prenatally with Down syndrome are aborted.

Down syndrome was one of the first conditions that could be prenatally diagnosed, but other conditions have similarly high abortion rates. A study in Guadeloupe, a French island chain in the Caribbean, found that a prenatal diagnosis of sickle cell anemia resulted in 70 percent of the babies’ being aborted. And according to a review of studies on abortion rates in Western countries, 95 percent of parents chose abortion when they found out their child in the womb had cystic fibrosis.

[Related: Patricia Heaton: ‘Iceland isn’t eliminating Down syndrome—they are just killing everyone who has it.’]

As for autism, a study in Taiwan asked parents of autistic children about a hypothetical situation in which they became pregnant again and autism was diagnosed prenatally: 53 percent said they would abort such a pregnancy. Looking at what happens when other conditions are diagnosed prenatally, and given the attitudes taken by some parents of autistic children, it is reasonable to assume that if some prenatal test for autism existed, it would result in a significant number of autistics being aborted.

This possibility is something both pro-life and disability rights activists should focus on, as both groups oppose the throwaway culture. If a person is not worthy of being born due to some condition, what does that say about those already born with that condition? It would seem to encourage wider discrimination in the forms of not accepting children or not accommodating adults. It could also reduce support for the already limited resources dedicated to looking for treatments that help autistics live a full life, since society could just abort the condition away.

Prenatal autism screening is on the horizon. We need to examine the ethical concerns before it becomes widespread. I hope this can be a moment for collaboration between two movements I am involved with who don’t always agree. For both pro-life and disability rights activists,, the argument should be quite simple: Each person from conception has inherent dignity as a human person, whatever their abilities or disabilities. 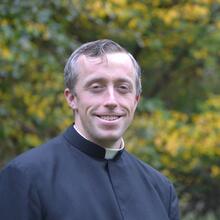 Matthew P. Schneider, L.C. Matthew P. Schneider, L.C., is a priest with the Legionaries of Christ, based in the Washington, D.C. area. He currently studies graduate moral theology, and he is the author of God Loves the Autistic Mind (Pauline), to be published in June 2022.
Show Comments ()
Join the conversation: Login or create an account
Before you can comment, you need to update your profile to include your first and last name, as required in our comments policy. Then reload this page and you'll be set up for commenting. Update your profile