Liz Cheney’s ouster from Republican leadership is bigger than politics. It’s a fundamental attack on truth. 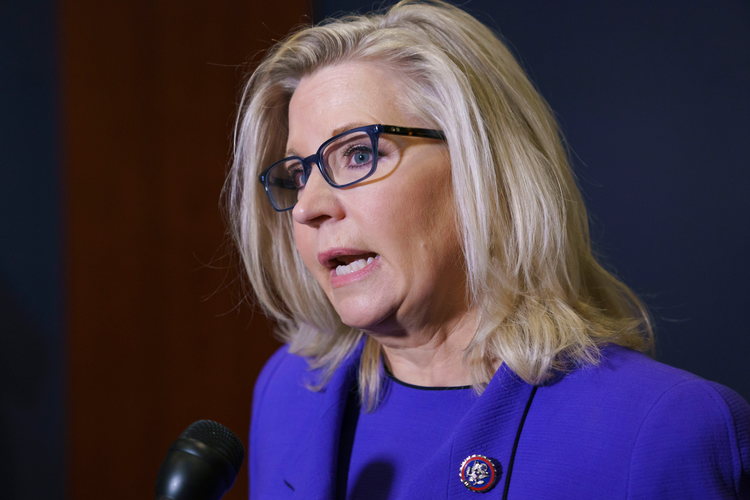 Rep. Liz Cheney, R-Wyo., speaks to reporters after House Republicans voted to oust her from her leadership post on May 12. In a speech before the vote, Ms. Cheney reportedly championed the importance of being a “party based on truth.” (AP Photo/J. Scott Applewhite)

When a political party declares war on the truth, the repercussions go far beyond the political arena.

But what happens to those truth claims when so many Republicans embrace lies?

Liz Cheney was re-elected to her post as the third-ranking Republican in the U.S. House of Representatives on Feb. 3. She lost it on May 12. What changed? Ms. Cheney was re-elected in February even though she had objected to President Trump’s lies about last year’s presidential election and his inciting of the Jan. 6 violence at the Capitol. But the rest of the G.O.P. House leadership then decided to close ranks behind Mr. Trump’s lie that the election was stolen.

Why should Republicans believe in the very notion of truth if so much of what they are fed raises doubts that it could possibly exist?

The ouster of Ms. Cheney is an affront to the truth at multiple levels. First, Mr. Biden did not steal the 2020 presidential election. (Even House Republican leader Kevin McCarthy acknowledged this after the voice vote to remove Ms. Cheney, as Senator Mitch McConnell has several times.) Second, most if not all Republican elites know that he did not steal the election, but are lying because they feel trapped by their own inability to craft a post-Trump Republican Party, and because they have been so successful at deluding much of their base. Most disturbingly, the G.O.P. is clearly spreading falsehoods to justify reserving to itself the option to reverse any future election result it does not like.

This is a dangerous game. Why should Republicans believe in the very notion of truth if so much of what they are fed raises doubts that it could possibly exist? How can the G.O.P. include both people who support fundamental moral truths and those who reject them? It seems likely that one group will be forced out eventually, and I don’t like the odds for the truth-tellers.

The consequences of the Republican Party’s recklessness is not confined to the political arena. They also concern anyone who cares about religion, and not the least Catholics. If the Republican Party won’t face the reality of the Capitol Hill putsch, how many Americans will decide that the claims about moral truth are just cynical lies? How many will conclude that the “real” truth is that there is no truth?

If a political party actively denies the possibility of the truth, then it undercuts the mission of the church.

The church does not and cannot take sides in partisan debates, but it preaches the truth. Its mission is affected by people’s attitudes toward the truth. When people talk about the compatibility of church teaching with political parties, they tend to focus on policy issues. But if a political party actively denies the possibility of the truth, then it undercuts the mission of the church.

To put it bluntly: If the party who claims to preach the truth about traditional marriage or the sanctity of human life from conception also preaches the lie of a stolen election, what are the voters to believe?

Pope Benedict XVI was keenly aware of this issue, as with his concern about the “dictatorship of relativism.” As the theologian Aaron Pidel, S.J., wrote for America in 2018, the rejection of truth is often rooted in a deeply spiritual hunger, but its “ultimate goal consists solely of one’s own ego and desires.” In a world in which “ethical certainties that had hitherto provided solid foundations have largely disintegrated,” as Benedict wrote in his 2004 exchange with the philosopher Jürgen Habermas, each and every person must decide daily whether they are going to contribute to a culture of truth.

Pope Benedict XVI was keenly aware of this issue, as with his concern about the “dictatorship of relativism.”

U.S. politics today seems characterized by the expense of a great deal of energy toward uniting groups of people into conflict with others but seemingly little effort toward meaningfully engaging the real challenges of our times. The result is that we are political, but we are also tired of thinking about politics.

Americans also have a deep hunger for belonging that has been frustrated by the collapse of almost every major institution in our society. The two major political parties still offer an experience of belonging to millions of Americans, but they should be judged for whether that sense of belonging is turned toward or against the truth.

Becoming partisans of the truth means relating differently to the groups of which we are members. Instead of pretending to be rebels or freethinkers, which are mostly mythical categories, Americans should acknowledge that our membership in groups shapes how we relate to the world and how we see its truth. We have to be cautious about any given truth claim uttered by an authoritative group in society, but also deeply committed to the notion that truth pervades the universe. We should worry that a truth claim pushed by a social group might only be for their benefit, and to the detriment of the poor and marginalized. This should not lead us to see the truth as empty, but rather as liberating and fulfilling of our fullest nature.

Did Benedict XVI predict the rise of Trump and fake news?
Aaron Pidel

These are the sorts of difficult issues Republicans should be pondering right now. It should be clear enough to Republican voters that their party leaders do not actually believe the lie that Trump won the election. So why do so many of them persist in believing it?

Catholicism can help free societies see the intrinsic connections between truth and our sociality. It can expose the dangers that beset the truth in democracy, where truth is important but also easily confused with majoritarian injustice. It can also model how Americans can live together in communities of truth: spaces in society where the desire to belong does not crowd out the truth but rather opens us up to the truth about ourselves, others and God.

The truth will set us free, but only if we let it.