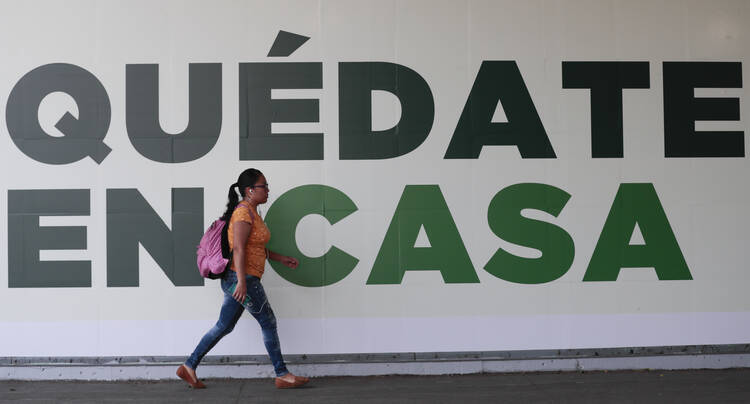 In Mexico City on March 31 a woman walks past a sign that urges: “Stay home.” Mexico's government broadened its shutdown of “non essential activities” and prohibited gatherings of more than 50 people to help slow down the spread of the new coronavirus. (AP Photo/Eduardo Verdugo)

Last Sunday, March 29, was a hot and sunny day in Mexico City, but those visiting jailed family members at the Reclusorio Norte, one of Mexico City’s main penitentiaries, did not have to fear a long wait in the scorching sun. At the main entrance of the jailhouse, a sprawling, concrete complex painted in blue and white, there was no line to speak of.

“It usually takes a little while to get in, but since the pandemic started, the number of visitors has gone down a lot,” Cecilia Solís told America. The young woman carried two green bags filled with groceries and some personal items for her husband, one of the 7,076 inmates serving time inside. “They started limiting visits maybe two weeks ago.”

At the main entrance of the Reclusorio Norte, prison staff, wearing surgical masks, sought out symptoms of Covid-19 among visitors, checking temperatures for signs of fever. A member of the staff squirted some antibacterial gel on their hands as they entered. She said that the number of visitors has decreased significantly during the past two weeks.

At each of Mexico City’s 13 prisons, hundreds of people are still admitted each visiting day to see their imprisoned family members. For the inmates, they are a vital lifeline.

“I think we’ve seen a drop of at least 40 percent in the number of visits,” she said, asking to remain anonymous as prison staff members are not allowed to speak to press on the issue.

At each of Mexico City’s 13 prisons, hundreds of people are still admitted each visiting day to see their imprisoned family members. For the inmates, they are a vital lifeline.

“Prisoners...depend for many of their basic needs on the family members visiting them,” said Saskia Niño de Rivera, director of Reinserta, an advocacy group that supports prisoners and their families. “It would make life very difficult for the inmates if they could no longer receive groceries and other items from visitors.”

Those visitors are part of the reason Mexico’s prisons are particularly vulnerable to the threat of a viral outbreak. Many are also severely overcrowded and lack even the most basic resources and facilities to isolate and treat prisoners with severe symptoms.

Mexico City’s prisons, home to almost 25,000 inmates, are no exception. According to figures provided to America by Mexico City officials, overpopulation at the prisons has been significantly reduced over the last decade. But while the facilities may now have some room to spare, prisoners, their families and organizations supporting them say none of institutions have the capacity to deal with a threat like Covid-19.

She has good reason to be worried. According to a Reinserta report, none of the penitentiaries in Mexico City have adequate medical facilities. There are no ventilators, no equipment for intubations. Basic hygiene behind these bars is a problem, and rumors and panic can spread quickly. Visitors and the groceries and other products they bring for the prisoners increase the risk of infection from the outside.

Mexico is now bracing for things to come, as the number of Covid-19 cases steadily rises. On April 1, 1,378 people were confirmed to have contracted the disease, with 37 deaths. In recent weeks Hugo López-Gatell, the federal undersecretary for public health, has warned about the need for social distancing and urged Mexicans to stay at home to prevent coronavirus infections from spiraling out of control. On March 30, the federal government declared a national health emergency.

Many Mexicans either cannot or will not comply with the government’s urgent instructions, however. Approximately half of the population lives below poverty level, and a significant portion of Mexicans work in the informal sector. For them, staying at home means being unable to provide for their families.

“It’s a very complex situation, but it’s a given that the prison system simply isn’t prepared for an outbreak of the coronavirus,” Ms. Niño de Rivera said. “The inmates are very worried. Under normal circumstances, I get three or four calls per week from prisoners; now it’s three of four per day.”

Many prisons in Mexico are subject to self-rule by criminal gangs. “This means the authorities effectively share control over the facilities. They can’t just shut them down and not allow people in. It would almost certainly mean riots.”

Mexico City authorities first announced they would take measures to prevent a Covid-19 outbreak in the prisons on March 18, providing antibacterial gel in the facilities, increasing cleaning and ramping up the monitoring of inmates for symptoms of the disease. The visiting regime continued unchanged, however, until March 25, when Rosa Icela Rodríguez, the secretary of government overseeing the penitentiary system in the capital, announced that the number of visitors would be reduced by 50 percent, allowing only one person per inmate to enter. Minors, pregnant women and people older than 60 are no longer allowed to visit.

Ms. Rodríguez’s office did not respond to a request by America for an interview.

Regardless of the measures already taken, on any of the four days per week when prisons allow visitors, thousands of people are still allowed to enter and leave the facilities even as the federal government urges Mexicans to collectively stay at home until at least the end of April. Even with prison staff checking visitors thoroughly, asymptomatic family members may bring the virus in.

“One major problem the authorities face is that the prisoners exercise a degree of self-government in the prisons,” Ms. Niño de Rivera said. Many prisons across the country have long been subject to self-rule by criminal gangs. “This means the authorities effectively share control over the facilities. They can’t just shut them down and not allow people in. It would almost certainly mean riots.”

That violence is not unknown in Mexico’s corrections systems; in February 2016, 52 prisoners died in a riot at the Topo Chico prison in the northern state of Nuevo León. Understaffed and underfunded, Mexico’s corrections staff certainly is not well prepared to deal with inmate uprisings. A Covid-19-related nightmare scenario already occurred in Colombia, when 23 died in Bogotá’s La Modelo prison after prisoners rioted in fear of an outbreak of the virus.

Stimulus does little to stifle Covid-19 fears in the undocumented community
J.D. Long-García

“There’s definitely a risk involved in closing down prisons for the duration of the outbreak,” said Sarahí García of Juvenile Justice Advocates International, a nonprofit that promotes rights for adolescent prisoners in several Mexican states, including Mexico City. “We’re concerned about the lack of protocols in the facilities, what the prisons will do, should there be an outbreak of the virus inside,” she said.

“We’re also worried about whether the human rights of inmates will be respected and about their mental health. Should visitors no longer be allowed, there’s a risk they’ll feel isolated.”

So far, neither the Mexico City government nor organizations such as Juvenile Justice Advocates and Reinserta have reported infections in the prisons. But given developments in other countries and the fact that many of Mexico City residents are unable to follow federal social distancing recommendations, the risk of a Covid-19 outbreak in the city’s prisons appears high.

Standing in front of the Reclusorio Norte on Sunday, Ms. Solís sighed. “Maybe it’s better to just shut all the prisons down for a while, not allow any visitors in,” she said. “But that’s not a great scenario either. I want to see my husband; I want to bring him the things he needs, but I don’t want him to become sick.”

@Jahootsen
Show Comments ()
Join the conversation: Login or create an account
Before you can comment, you need to update your profile to include your first and last name, as required in our comments policy. Then reload this page and you'll be set up for commenting. Update your profile
Show Comments ()
Comments are automatically closed two weeks after an article's initial publication. See our comments policy for more.