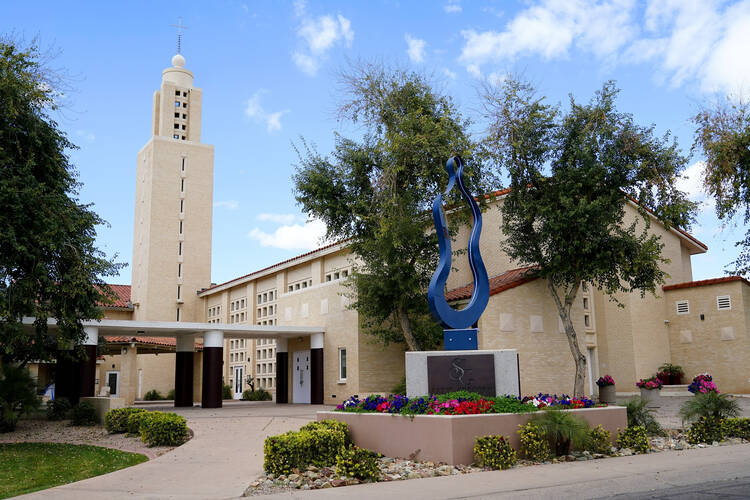 The Catholic Church said baptisms performed by priest, Rev. Andres Arango, who served in Arizona for 16 years are now presumed to be invalid because he used incorrect wording on a subtle but key component of the sacrament, including at St. Gregory Parish Wednesday, Feb. 16, 2022, in Phoenix. (AP Photo/Ross D. Franklin)

PHOENIX (AP) — The priest was beloved by his parishioners—yet for years he made a one-word ritual mistake, repeatedly, that has caused confusion and anxiety for thousands of Catholics in the Phoenix area now worrying that they were improperly baptized.

Under scrutiny are baptisms performed by the Rev. Andres Arango, who served in Arizona for 16 years. Catholic officials estimate that thousands of baptisms are now presumed to be invalid because he used incorrect wording, and they say those affected may need to be re-baptized. Some may feel obliged to have other church ceremonies performed again, even including marriage.

[Explainer: What is an invalid baptism?]

Arango’s error was in saying, “We baptize you in the name of the Father, and of the Son, and of the Holy Spirit,” when he should have begun the sentence by saying, “I baptize you.” The difference is theologically crucial, the Vatican ruled in 2020, because it’s not the “we” of the congregation doing the baptizing but the “I” of Jesus Christ, working through the priest.

The difference is theologically crucial, the Vatican ruled in 2020, because it’s not the “we” of the congregation doing the baptizing but the “I” of Jesus Christ, working through the priest.

Arango served in three parishes in metro Phoenix from September 2005 until his resignation Feb. 1, most recently at St. Gregory, where parishioners credited him with reversing a worrisome drop in membership.

“Without his heartfelt kindness, care, concern and shepherding, physically and spiritually, our church and school would be nonexistent,” said Mona Shelley, a lifetime member of the parish. She said Arango had returned to the church several times since his resignation to perform re-baptisms with the proper wording.

Fellow parishioner Christina Moishe Collins, who is also a cantor at St. Gregory, said Arango received a standing ovation after his final service there, and people waited outside with banners to thank him and show support.

“Father Andres is an amazing priest and he may have made a mistake, but that doesn’t change the fact that he really cares about his parishioners and really, truly, lives his faith.”

“I don’t see him doing this with malice in any manner,” she said. “Father Andres is an amazing priest and he may have made a mistake, but that doesn’t change the fact that he really cares about his parishioners and really, truly, lives his faith.”

Even a parishioner directly affected by a botched baptism, Eliana Najera, said she is grateful to Arango for his ministry and wishes he could return. Najera’s 13-year-old daughter, Alysson, was baptized by Arango at another church and will be re-baptized at St. Gregory next week.

“As a mother I feel bad because all of these years I allowed her to receive Communion,” Najera said, referring to another sacrament that requires the recipient to first be baptized. “I have more questions than answers.”

[Interview: Father Matt Hood, the priest who discovered he was invalidly baptized (and ordained)]

The Diocese of Phoenix is trying to identify people baptized by Arango. It has set up an FAQ section on its website to confront issues related to the botched baptisms and created a form for people to fill out to start the process of getting re-baptized.

The Vatican in June 2020 issued the guidance declaring that the “We” formula was invalid and that anyone who was baptized using it must be re-baptized using the proper formula. The Holy See said it was taking action because some unnamed priests were using the “We” formula to make the baptism more of a communal affair involving parents, godparents and the community in welcoming a new member into the church.

“It saddens me to learn that I have performed invalid baptisms throughout my ministry as a priest by regularly using an incorrect formula.”

In a note on the Phoenix diocese’s website, Arango wrote: “It saddens me to learn that I have performed invalid baptisms throughout my ministry as a priest by regularly using an incorrect formula. I deeply regret my error and how this has affected numerous people in your parish and elsewhere.”

There have been similar cases elsewhere in the past.

In Detroit, church officials in 2020 said a deacon used the wrong words while baptizing people from 1986 to 1999.

The most dramatic consequence in that case involved the Rev. Matthew Hood, who was baptized as a boy by the deacon and later became a priest: Because his baptism was invalid, so was his 2017 ordination. Hood discovered the error while watching a video of his childhood baptism, the local archdiocese said.

The archdiocese said marriages performed by Hood might not be valid and urged couples to speak to their pastor as soon as possible “so any steps can be taken to remedy your marital status in the church, if necessary.”

Hood was baptized again and ordained as a priest a second time.

Also in 2020, in Oklahoma, a new priest, the Rev. Zachary Boazman, learned that his baptism was invalid. Oklahoma City Archbishop Paul Coakley subsequently validated marriages performed by Boazman, who was baptized and ordained again.

Katie Burke, a spokesperson for the Diocese of Phoenix, said rank-and-file Catholics brought the issue of Arango’s baptisms to the attention of the church.

“I feel like he’s kind of grieving this as well as we are as a community,” said one parishioner.

“Likely, the people who heard it happen in Phoenix were aware of these other stories and therefore knew the phrasing to be incorrect,” Burke said.

Burke said the diocese was not aware of any seminarians, deacons or priests who were improperly baptized by Arango.

In a petition to the Phoenix Diocese, parishioners requested a town hall meeting at the church to hear their views on the removal of the priest and demand answers to the diocese’s decision to invalidate thousands of sacraments. The petition also included a spreadsheet with hundreds of examples of how Arango positively impacted their lives.

Before serving at St. Gregory, Arango was pastor at Saint Jerome Catholic Church in Phoenix and the St. Anne Roman Catholic Parish in nearby Gilbert. Earlier, he served in San Diego and Brazil.

Andrea Reyes, a lifelong St. Gregory parishioner, became friends with Arango during a church trip to Israel in 2017 and has kept in contact since he resigned.

“He basically said that this is a very unique situation, and he understands that he made a mistake,” she said. “I was like, ‘We miss you so much.’ And he was like, ‘Yeah, I miss you guys too.’ I feel like he’s kind of grieving this as well as we are as a community.”

Another parishioner, Johnny Martinez Jr., said he and 20 family members started a group chat in which they discussed whether any of them had been impacted by the botched baptisms. Martinez found old pictures confirming that his two children were not baptized by Arango, but said he interacted with the priest multiple times.

He praised Arango for his gentleness and diligence, yet said resigning was the right thing to do.

“We all have a job to do and you need to do that job correctly. It was effectively not done correctly,” Martinez said. “We just have to pick up the pieces and move from there.”

But María Vázquez, whose 6-year-old grandson was baptized by Arango and who still considers it to be valid, has sent a letter to the diocese seeking the priest’s reinstatement,

“I’m asking them to reach into their hearts and forgive,” said Vázquez. “There have been priests who have done far worse and have been allowed to remain in their churches.”

[Explainer: What is an invalid baptism?]

Note (AP): This story has been corrected to show that Eliana Najera’s daughter was baptized by Arango at another church, not St. Gregory.

Jacques Billeaud – Associated Press
Show Comments ()
Join the conversation: Login or create an account
Before you can comment, you need to update your profile to include your first and last name, as required in our comments policy. Then reload this page and you'll be set up for commenting. Update your profile